“Set It Off” is advertised as a thriller about four black womenwho rob banks. But it's a lot more than that. It creates a portrait of thelives of these women that's so observant and informed; it's like “Waiting to Exhale” with a strong jolt of reality. The movie surprised and moved me: Iexpected a routine action picture and was amazed how much I started to care about the characters.

The action sequences--the robberies, the close calls, the shootouts--are all well-handled (this movie has the first chase scene I've seen in a long time that I've cared about). But what makes the film special is the way it shows the motivations of its four women, whose lives are in economic crisis. It doesn't justify bank robbery, but it makes a convincing case for the mixture of desperation, impulsiveness and thrill-seeking that catapults its characters from minimum-wage jobs to TV news bulletins.

As the film opens, Frankie (Vivica A. Fox) is a teller in a bank that's in the process of being robbed by a gang of armed men. She recognizes one of them from her neighborhood: “Darnell! What are you doing?” Afterward, Frankie is grilled by the cops and bank authorities. “What's the proper procedure for dealing withthis situation?” asks a detective (John C. McGinley). She's fired. “The fact that you knew the perpetrator,” a bank executive coldly tells her, “doesn't sit well with us.” These scenes are immediately believable. Although Frankie and Darnell come from the same milieu, their lives have taken completely different paths, until that day. Meanwhile, we meet Frankie's friends, including Stony(Jada Pinkett), who has a problem: Her kid brother has been accepted at UCLA,but didn't get a scholarship. This looks like a plot gimmick (will she rob banks to pay his tuition?) until the screenplay, by Kate Lanier and Takashi Bufford, provides a convincing, realistic twist.

The other friends include Cleo (Queen Latifah), a tall, strong lesbian who delight sin buying gifts for her girl-toy, and Tisean (Kimberly Elise), who has a young child and is struggling to raise him as a single mother. They work for a janitorial service, and that's where Frankie ends up, too; being fired has cost her the references she needs for bank employment.

All four women know Darnell, and the word quickly spreads that he got away with$20,000. They draw an obvious conclusion: “If crack head Darnell can rob a bank, we can.” They begin planning a bank job, more on a dare than anything else. After some false starts, they actually do rob a bank, hesitating, almost deciding not to, and then following an impulsive decision.

But life has unexpected turns. Casing a bank for a possible robbery, Stony is approached by a black bank executive (Blair Underwood) who likes her looks and suggests she needs her own “personal banker.” She starts dating him, but won'ttell him where she lives; it's as if this relationship is taking place on a separate track from the rest of her life.

The movie is more aware of the economic struggles of its characters than most American films allow themselves to be; the director, F. Gary Gray, also made the underrated “Friday,” about unemployment and anger. There's a wonderfully written scene where the women sit on a rooftop, smoking pot, looking at a factory and observing wistfully, “Before they started laying people off, they were paying $15 an hour at that place.” These women can't hold much of a household together on the minimum wage. Tisean brings her young son to work with her, because she can't find childcare and can't afford to lose a day'spay. The kid is injured--not seriously, but enough so that a social worker takes custody of the child, and Tisean is devastated. Sure, she can get her child back, when she proves she can provide an adequate home and childcare. But how, in her economic reality, is that possible? One scene after another surprised me with its invention. I loved a moment when the four women sit around a conference table in the office building that they clean, and do imitations from“The Godfather” while discussing their plans. And the scene where Cleo lives i tup with the girlfriend she dotes on. The scene where Stony's banker takes her to a black-tie dinner and she says it's “the best night of my life.” And the subtle, unspoken reasons that a white woman refuses to pick Cleo out of a police lineup.

There is even a scene where the four women hold a planning session at a coffee shop,discover they don't have enough money to pay the bill and sneak out--stiffing the waitress. The waitress, by the way, is black. So is the social worker. The movie is not about overt racism, but about the buried realities of an economic system that expects women to lead lives the system does not allow them to afford.

The movie is not perfect; its most obvious error is that the characters do not react to the violence in the way that real women would. The movie provides perfunctory reaction shots and then moves on. The movie is so psychologically accurate in its other scenes that it should have given more thought to how the reality of death would affect these women, who are not killers.

One clue to the depth of “Set It Off” may come from a previous credit of co-writer Lanier, who wrote the Tina Turner biopic “What's Love Got to Do With It?” That was grounded in close observation of women's harsh realities, and so is “Set It Off.” Reviewing “Waiting to Exhale,” which I enjoyed, I wrote: “There are times when the material needs more sharpness, harder edges, bitter satire instead of bemused observation.” Here is the film I was thinking of. 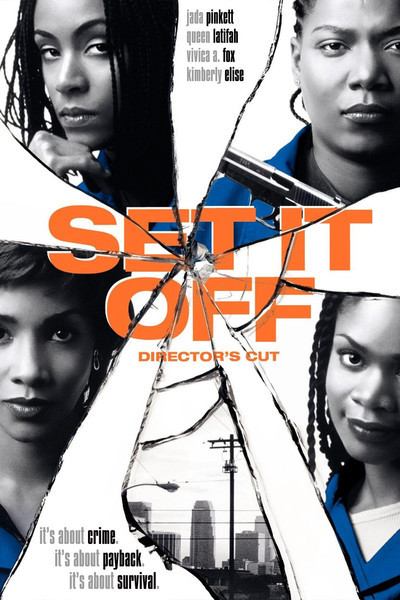 Rated R For Strong Graphic Violence, Pervasive Language, Some Sex and Drug Use

Vivica A. Fox as Frankie