Three years ago, director Joe Penna and his co-writer, Ryan Morrison, made their feature filmmaking debut with “Arctic,” a spare survival story starring a snowbound Mads Mikkelsen awaiting rescue. The film was gripping in its understatement and use of silence—it was practically dialogue-free—and a riveting exercise in exploring the detailed minutiae of human nature. Having an expressive and magnetic actor the caliber of Mikkelsen at its center certainly didn’t hurt.

Now, Penna and Morrison are back with a similar premise on a slightly larger scale: “Stowaway” is a spare survival story in space, featuring four characters on a doomed mission to Mars. (This is actually the first feature screenplay the duo wrote together, even though “Arctic” came out first.) It’s a clever take on a familiar genre with a terrific cast, but the slow burn may be too slow this time. Penna and Morrison (who’s once again the film’s editor, as well) more effectively established Mikkelsen’s character wordlessly than they do with Toni Collette, Anna Kendrick, Daniel Dae Kim, and Shamier Anderson having conversations with each other as they address various emergencies. And the fundamental reason they find themselves in their chief predicament, although it’s explained to us, still provides an implausible distraction.

In the near future, a team blasts off on a two-year trip to Mars. Collette stars as the ship’s commander, Marina Barnett, who’s making her third and final journey to the colony there. Kendrick is the mission’s medical researcher, Zoe Levenson; Kim is biologist David Kim, who’s studying the respiratory possibilities of algae. They’ve been chosen from thousands of applicants and undergone extensive training. But the film reveals in small, subtle ways that these two are indeed regular people and not superhuman astronauts. David suffers from vertigo and vomits not long after takeoff; Zoe’s delicate charm necklace floats up toward her face to indicate a loss of gravity, and once they’ve docked she unbuckles and exclaims to Marina: “Are you kidding? That was incredible!” (“Stowaway” depicts space travel, at least initially, not as a process that’s smooth and tranquil, but rather one that shakes you to your bones, to your core.)

While they’re all upbeat and provide polished, perfunctory answers during an initial television interview from space, their polite workmanship is shattered with the realization that they’re not alone. There’s a man—hidden, unconscious and bleeding—in the ship’s hull, which Marina discovers when he comes crashing through the ceiling on top of her, breaking her left arm as she tries to catch him. When he comes to, the crew discovers that his name is Michael Adams (Anderson) and he’s a launch crew engineer and graduate student. Somehow, he got knocked out during final checks and became trapped, unbeknownst to anyone. Now, he’s unwittingly hurtling through space. How is this sort of thing possible? I’m not an aeronautical engineer—I got a C in chemistry in high school, hence I write about movies for a living—but I found the explanation for Michael’s presence on board to be extremely unbelievable. The film’s production notes detail Penna and Morrison’s thorough attention to detail in wanting to make the story scientifically accurate, and it probably is, but this crucial plot point just seemed impossible.

Regardless, he’s there, so four people are now using up the ship’s resources instead of just three, for whom they already were going to be stretched thin within this cramped area. He understandably freaks out when he realizes he’s in space—there’s a great shot of him seeing Earth from afar amid the blackness—and Anderson makes his sense of panic palpable. Additionally, he’s left his younger sister, for whom he serves as legal guardian, alone back home. But the real crisis is that Michael critically damaged the carbon dioxide-scrubbing mechanism when he crashed through the hull, making it impossible for everyone to have enough oxygen to survive the entire journey.

It is literally one thing after another, but Penna portrays the increasing feeling of doom not with histrionics and a hyperbolic score but rather through long tracking shots and muffled bits of conversation in faraway corridors. As in “Arctic,” he’s wise enough to let his actors convey so much of what their characters are experiencing though their faces: subtle expressions of disappointment, anguish, fear. One call in particular to ground control reveals Collette’s ability to balance the truth of Marina’s anxiety while sounding poised and capable to the folks on the other end about options. Meanwhile, Zoe remains perky and optimistic, while the older and more pragmatic David realizes that someone’s got to go and takes steps to make that drastic change happen.

The makings are all there for a fascinating character study, which “Stowaway” more closely resembles than a sci-fi thriller. But the fact that we know so little about these people beyond a few basic traits makes it difficult for us to feel as emotionally invested as we should in their fate. And so a death-defying space stunt toward the end, which Penna renders in an intimate, low-tech way, is dizzying but lacks the suspense and emotional heft it should carry. The actors all give solid performances, especially the relative unknown Anderson, who holds his own opposite these veterans. He also manages a degree of mystery as to what his intentions are, which never truly pays off in the script. Ultimately, though, “Stowaway” feels like a frustrating cry into the void. 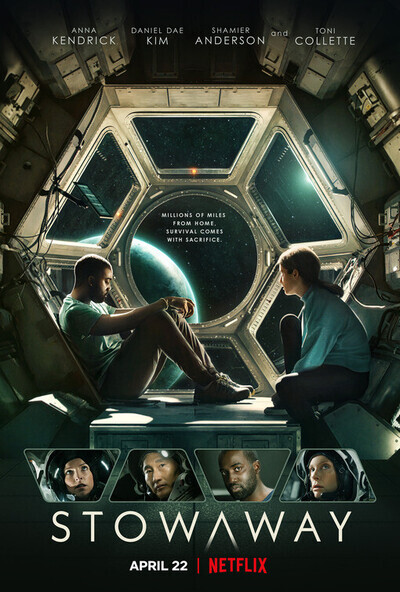