Some can kill as easily as turning off a light

The chilling and stylish and aggressively creepy "Stoker" begins at the end and takes us on a shocking and lurid journey before we land right where we started, now seeing every small detail through a different lens.

Some might say the focus on psychopathic behavior exploits and glorifies the acts of violence splattered all over the screen here. No doubt some audience members might feel compelled to walk out after several scenes, including a shower sequence in which a woman masturbates while flashing back to a murder. But in the tradition of films such as "In Cold Blood," "Badlands" and "Natural Born Killers," this is a story about murders committed not by monsters in masks or gun-wielding gangsters, but by damaged souls who were either born without a conscience or left it behind along the way.

Mia Wasikowska (the title character in Tim Burton's "Alice in Wonderland") plays India Stoker, a pale, teenage outcast who is so serious and mysterious, she could be the sister of that pale, teenage outcast from "Beautiful Creatures." (They should SO be Facebook friends and follow each other on Twitter.) India's beloved father dies in a car crash on her 18th birthday, bringing about a visit from her dad's brother — an uncle she never knew she had.

Uncle Charlie (Matthew Goode) is just back from business in Europe, and he strikes an immediate connection with India. Like without talking. As in he can maybe hear her thoughts, and she can read his.

But "Stoker," the first English-language film by Korean director Park Chan-wook ("Oldboy"), is no supernatural thriller. It's much more frightening than that — asking us to accept that some people can kill as easily as they can turn off a light, and that they may have been that way even when they were children.

Chan-wook clearly has off-the-charts talent, which he can't help flaunting to the point of distraction in some instances. Some shots, e.g., the close-up of a bright-red curlicue of a pencil shaving after the pencil has been used as a weapon, are darkly funny and brilliantly executed. Other times, you wish he had a friend in the editing room to ask, "Do we really need this guitar solo right here?"

Mostly, though, he is spot on, creating unbearable tension, sexual and otherwise, as Uncle Charlie smoothly inserts himself into the family dynamic. India's cold and distant mother, Evie (Nicole Kidman), warms up in Charlie's presence, even though she should know better. Jacki Weaver shows up as Charlie's aunt, who seems to want to warn India about Charlie's true nature but is scared to do much more than breathe in his presence. (Weaver's character and her questionable actions represent some of the rare missteps in a script by actor Wentworth Miller of "Prison Break.")

As Charlie seduces mom and daughter with very different approaches, we're not sure if India is a damaged, exploited young woman, or if she's been waiting her whole life for Uncle Charlie to show up and validate her pitch-black soul. Maybe it's both.

Kidman, at least partially free of the constraints of whatever modern medical face-freezing tricks she's been employing to stave off the natural aging process, is wonderful playing a character who could have been written by Tennessee Williams. Wasikowska is more effective as the mousy India first finding her way than as the person who India becomes.

As for Matthew Goode, I remember seeing him opposite Joseph Gordon-Levitt in "Lookout," one of the best movies of 2007, and thinking him capable of winning an Oscar someday. This won't be the role, because a film like "Stoker" will be long-forgotten come nomination season, but it won't be for lack of talent. This guy can bring it. 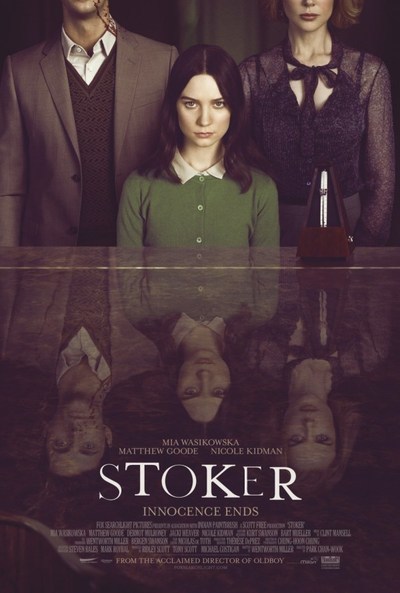