I’ve been a fan of the Wolff brothers since the days of the Naked Brothers Band, the endearing “Hard Day’s Night”-style movie their mother, actress/director Polly Draper, made in 2005 with her then six and nine-year old sons. They played fictional versions of themselves as members of a children’s rock group, and the movie, shot in their home and with their friends, had a natural, freewheeling charm and became a television series. Since then, Nat and Alex Wolff have become fine actors, Nat in films like “The Fault in Our Stars,” “Grandma,” and the underrated “Paper Towns,” and Alex in “Hereditary,” “Jumanji: Welcome to the Jungle,” and “Patriot’s Day.” It is very good to see them playing brothers in “Stella’s Last Weekend,” a true family affair. Draper wrote, directed, and co-stars as their mother and the lovely score was composed by their musician father, Michael Wolff.

Stella is the ailing family dog who is scheduled to be put to sleep. Sally (Draper) is planning a farewell party at her house in Queens for Stella’s human and canine friends. Jack (Nat Wolff) returns home from college to say goodbye, while Oliver (Alex Wolff) is still in high school. Their first scene together is beautifully crafted, benefitting enormously from the brothers’ natural chemistry. They seamlessly run through a kaleidoscope of topics and emotions.

The Wolff brothers have the effortless rhythm of people who have known each other forever, from their silly-voice childhood characters to conversations, tentative and indirect but perfectly understood by them both, about sex, death, and growing up. They joust over who owns the James Brown t-shirt and whether Ollie should have moved into Jack’s bedroom. They are instantly united in their reaction to Sally’s new boyfriend, Ron (Nick Sandow) and his comb-over. They have the same irreverently raunchy humor, talking about sex and looking at a Snapchat photo of “underboob” from Ollie’s girlfriend Violet (Paulina Singer). Jack tells Ollie about the girl he met at a party and cannot forget even though she did not respond to his calls or texts. We see remnants of childhood sibling rivalry, the pleasure in shared history, and glimpses of the men they are becoming all at the same time.

Jack and Ollie tease Sally, but they are devoted to her. When Sally thought the flowers Ollie bought for Violet were bought by Jack for her, with the slightest of nods, Ollie agrees to what we expect is not the first or the last time the boys have conspired to protect Sally from the truth to make her feel better. Protecting people from a painful or uncomfortable truth in small ways appears to be a family trait. Sally and Ollie conspire to let Ron think she has insisted he stay home on a school night and apologized for insulting her when she has really allowed him to go out and was not insulted. Jack does not tell Sally about his problems at school and in high school he never told her how much he wanted to go on a school trip because he did not want her to worry about paying for it. Sally lets Ron think she has accepted his proposal, but tells Jack she has not. The family makes some progress in revealing and accepting at least some of these truths over the course of the weekend.

Sally and her sons have a warm, loving relationship that could appear to have what family therapists call poorly defined boundaries. It certainly looks that way to Ron, a successful businessman who has more traditional notions of the respect and obedience children owe to their parents. But it becomes clear that the boys’ frankness with their mother is not a lack of respect. The film’s greatest insight is in its portrayal of the melancholy that runs through the high-spirited brashness of teenagers from New York, and a mother who jokes that she should have had a Stella-type farewell party for their father. The death of the boys’ father, who was in their lives for only a fraction of the time they had with Stella, left a big empty space. The banter, superficial cheer and especially the inability to care about trivialities (like going out on a school night, a typo in Stella’s farewell party banner, or whether a college student smokes weed) are all efforts to bridge that emptiness. They never will, and the Wolff brothers and Draper convey this with great heart and insight. As a writer and director, Draper uses her understanding of her sons as people and actors to shape their characters and performances. In return, the trust they have in her allows them to be completely open.

The small, silly, sometimes painful, often tender moments between Jack, Ollie, and Sally make the film worthwhile, despite distracting over-plotting, with too much time spent on the love triangle between the brothers and Violet. Singer is lovely but Violet is more construct than character and the snooty ballerinas in her dance troupe seem to come from an entirely different movie. This is really a story about grief, showing us that we never really recover from loss, but we can absorb it and use it to strengthen our connections, even as we must say goodbye again. 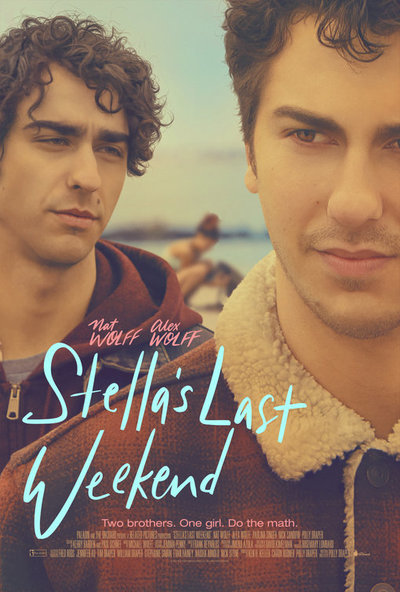