At a press conference for this film at last year’s Cannes Film Festival, its writer/director Alain Guiraudie said “Sex is more important than sexuality. It’s a world of pleasure but sex can also be a world of suffering. Sometimes sex is scary. It’s the origin of the world and maybe the end of the world too.”

One thing’s for sure: In “Staying Vertical,” every character has sex on the brain, all the time. The movie opens with a windshield view of a rural road; after the car passes a foxy male adolescent, it turns around, and soon enough its driver is approaching the kid, asking him if he wants to be in pictures. The kid, Yoan (Basil Mielleurat) has a couple of homophobic disdainful comebacks, but Leo (Damien Bonnard), a soulful-eyed sad-sack in early middle age, protests that it’s not like that, he’d only like him to “audition.” Rejected, Leo drives off past the nearby house from which emanates loud psychedelic music, where an older man, possibly the kid’s dad, sits. After navigating a curve in the road that we’ll see again and again (the effect reminds one of Kiarostami’s “The Wind Will Carry Us,” a more chaste and largely better film), Leo finds himself sitting on a hilltop chatting with a young shepherd woman Marie (India Hair). They briefly discuss the local shepherding situation; “I’m into wolves,” Leo allows. Then, boom, her hand is rubbing the crotch of his jeans, and then boom, we’re in her bedroom, Guiraudie providing a shot of the nude actress’ lower half that’s a direct homage to Courbet’s painting “The Origin of the World” (look it up), and there they go. Then, soon enough, Leo finds himself running away from a rough-hewn male rustic, uttering the immortal line “Even if I wanted to, I couldn’t sleep with my son’s grandpa.”

Maybe this is just what it’s like in France. I’ve been there several times, and it wasn’t like that for me, but I didn’t spend much time in rural areas, so that could have made all the difference.

Anyway. I know, I know—what’s this “son’s grandpa” bit? I admit, I did leave some stuff out just now. Which is:  Leo hits the pregnancy jackpot first time out with Marie, and before you can say “jump cut,” there’s an explicit and unsimulated one-take childbirth scene, hemorrhoids and blood and all. And you thought being a film critic was all skittles and beer. (In the press conference I quoted, Guiraudie said “I was actually outside the delivery room. If I’d have been in there, it would have been more complicated. It would have been more violent.” One French mother is surely grateful that he never got through the door, I bet.) “I never thought this would happen to me,” Leo says, and as he’s a filmmaker you might take him for a stand in for Guiraudie, and since Guiraudie is a prominent figure in Queer French Cinema you might think, “Well bien sur,” but come on, the whole point is that life is complicated. So after rejecting the advances of his sort-of father-in-law, trying to reconcile with Marie, who’s taken off without the baby after experiencing post-partum depression, or maybe frustration with Leo’s lack of sexual interest (conveyed in a way as explicit as the childbirth scene, or something), Leo goes back to the house where Yoan lives with the old man. It’s the old man, Marcel, who listens to that loud psychedelic music (“It’s Pink Floyd,” he shouts to Leo, except it isn’t). And Marcel’s not Yoan’s father, rather they live together in some kind of arrangement with a, yup, sexual dimension.

Driven to semi-distraction by single parenthood, his inability to get far on his screenplay (the movie plays with time rather outlandishly, depicting childbirth almost immediately after the sex act; if you’re looking to parse this movie plausibly, you’ll have to accept the idea that Leo takes the concept of “slow cinema” into the creative process itself), and maybe his inability to get to first place with Yoan, Leo paddled up a narrow river, to the spectacularly designed post-modernist hut (based on the work of French micro-habitat visionary Guillame de Salvert) of healer Mirande (Laure Calmy), with whom he has an entirely platonic relationship. Except Leo’s producer hunts him down to this retreat, and HE has sex with Mirande.

What’s the point, you may wonder. Well, in case you haven’t guessed by now, Guiraudie is one of those particular French provocateurs, both blunt and precious, distant and in-you-face, precocious and pretentious. I haven’t even gotten to the sheep and wolves businesses—they form one of the film’s central metaphor—or the “now I’ve seen everything” climax that pushes the film out of the realm of tetchy allegory and into deliberate but not particularly funny disaster comedy. Guiraudie certainly doesn’t lack for audacity, but he’s not quite a master of tone. His work has certain similarities with that of Bruno Dumont, but in terms of delivering on comic tropes, Guiraudie makes Dumont look like the Coen Brothers. And Dumont’s work on its own doesn’t look much like the Coen Brothers’. That the movie sometimes looks as if it was shot through a glass of very weak tea doesn’t help matters much (although the portions that were designed to maybe make you throw up in your mouth a little are crystal clear). The movie’s irreverence is in certain respects commendable, but its po-faced attempts at cinematic philosophizing are transparently stilted. Still, it might make an interesting date movie, if by “interesting” you mean “likely to get one party served with a restraining order.” 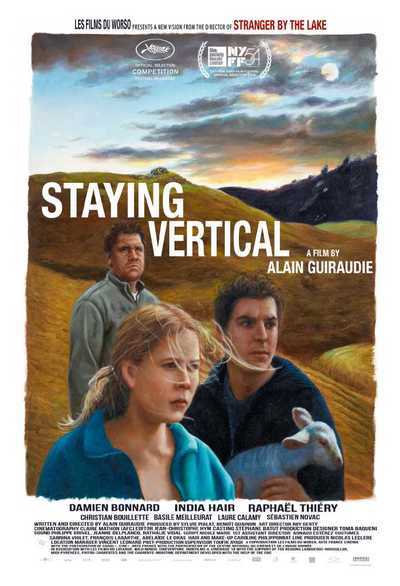