"The Clock." "Dogfight." "Before Sunrise." The rarely-discussed but charming "Night Owls." "Lost in Translation." Movies where two people, preferably with different life experiences and/or outlooks, meet, sometimes "meet cute," and spend 24 life-changing hours together. There's the whole "people come into your life for a season, a reason, or a lifetime" philosophy. The characters are not meant to be together but they both gain something through the interaction. When these films don't work, due to a bad script or stilted acting, the artifice crumbles. When they do work, the audience enters into a utopia, where time stretches out, where connection is possible, as Celine says in "Before Sunrise": "If there’s any kind of magic in this world it must be in the attempt of understanding someone sharing something ... The answer must be in the attempt.”

"Stay the Night," written and directed by Renuka Jeyapalan, is this type of film, and it works really well. Jeyapalan has kept it simple, simple enough that the two characters—Grace (Andrea Bang) and Carter (Joe Scarpellino)—have a space to interact, listen, take each other in, get to know each other. To quote Celine in "Before Sunrise" again: "I believe if there’s any kind of God it wouldn’t be in any of us, not you or me, but just this little space in between." Jeyapalan creates that "little space," and her two actors, with sparkling chemistry between them, allow their characters to emerge, tentatively, towards a connection. It's such a pleasure to watch this relationship develop.

Grace is first seen begging for a new position in the HR department where she works. Her boss tells her no, she's too "reserved" and "standoffish." Grace is crushed. She doesn't want to be "reserved" anymore. Her "reserve" is shutting her off from life. Grace's vivacious friend Joni (Humberly González), currently crashing on Grace's couch, urges Grace to be more open, maybe talk to men, flirt, have some fun. Grace just can't. She's too resistant, too shy.

Across town, Carter, a professional hockey player, is given the bad news by his coach: he's being "sent down" to the minors. Carter's playing is not up to par. The team puts him up in a swanky hotel for the night, and the following morning he has to go to Syracuse for his new "assignment." Carter is not happy about it at all. Without hockey, what even is he going to do with his life?

Grace and Carter meet in a bar. Or, to be more accurate, they meet outside a bar, and end up sharing a cab. Instead of going on alone to her apartment, Grace—wrestling mightily with herself—gets out with Carter. He hasn't made one move towards her. The two go up to his room in total silence. Carter follows her lead. Perhaps he thinks he hit the jackpot when this random stranger decides to come to his room for an obvious reason, but then, about ten minutes later, Grace races out of the hotel in tears, with Carter in pursuit. Why she is in tears, and why Carter pursues her, is best left for the audience to discover. Suffice it to say, they decide to get a drink, introducing themselves on the walk over: "I'm Carter, by the way." "Grace."

Thus begins their long night together, where they get to know each other, at first on a surface level, until finally breaking through to something profound. Since they are strangers, both are freed up from the roles they play elsewhere. Carter has no context for Grace other than the woman right in front of him. He doesn't find her "reserved" at all. Grace has no context for Carter. She doesn't watch hockey. She has no idea who he is. Both characters are well-developed. One small choice in a different direction would have tipped the balance of the film into cliche. If Carter was "on the prowl," for example, the movie would have been about how a nice woman helped him be a better man. But that's not what happens. Carter is taken aback by Grace, and slightly freaked out, but he's also curious. (You can almost see the moment he gets curious about her.) Grace finds herself opening up to him, but the residual reserve shows her ongoing interior battle. The two of them are somehow released from the pressure of hookup expectations and can actually talk about these issues. They have natural chemistry, chemistry rooted in pheromones, of course, but also in the joys of conversation. At one point, she complains, "You're so impatient" and it's like they've known one another all their lives.

Both actors are fun to watch, in tune with their own impulses and fully aware of what's happening with the other. They are both very open. A film like this is a dance. If one changes the dance step, the other must follow. Both Bang and Scarpellino pay close attention to each other. Their dynamic flows. This is a testament to the actors' obvious gifts but also a testament to Jeyapalan's script. By the end, not only do you feel like you have gotten to know Grace and Carter, but you care about what happens to them.

Conor Fisher shot the film, and he takes a gentle and sometimes romantic approach. The nighttime city skyline glimmers with lights outside the windows of Carter's hotel room or the windows of Grace's office (where the two end up at around midnight). The imagery is dreamlike, where the characters look like they are floating above the city, floating above their own lives.

Something like "Stay the Night" is a delicate balancing act. It requires a sensitive touch, and is dependent on mood, subtext, behavior, and character. A film like this might look easy but it's not. If it were easy, more people would do it. 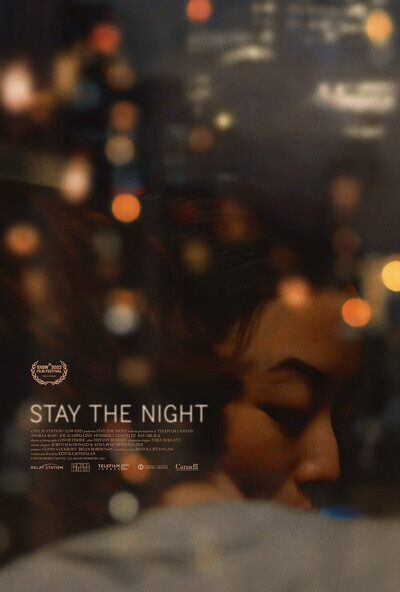