Some people might not be ready for HBO Max’s “Station Eleven.” After all, it’s a story of a pandemic that destroys most of the planet and divides its survivors. While it’s based on a 2014 acclaimed novel by Emily St. John Mandel, the show has something to say that feels unique in 2021, about what we think we’ve lost forever and what we discover will somehow return to us. It’s a show that resonates in a different way now than it would have pre-pandemic, but I think it would have been incredibly powerful whenever it came out because its themes are timeless. They just feel a little more urgent in 2021.

Created by Patrick Somerville (“Maniac”) with a premiere directed by Hiro Murai (“Atlanta”), “Station Eleven” opens in Chicago on the eve of a world-destroying pandemic. Jeevan (Himesh Patel) is at a production of King Lear when he realizes that the lead actor, a star named Arthur Leander (Gael Garcia Bernal) is having a heart attack. He’s the first one to rush to the stage and try and save the actor's life, which thrusts him into an unusual role. The tragic event forces Jeevan into becoming the guardian of Arthur’s child co-star Kirsten (Matilda Lawler) because her regular “wrangler” is occupied. Jeevan agrees to walk Kirsten home ... and then the world literally collapses.

Much more than COVID, the pandemic that pushes its way across the globe in “Station Eleven” is almost instantly population-destroying. The story jumps forward 20 years and reveals Kirsten (Mackenzie Davis) is still alive, a leader in a traveling company of performers that rolls across the land, doing theater for fellow survivors. I’m not sure how much the construction of “Station Eleven” mirrors the book, but it’s incredibly robust storytelling in television form as it moves back and forth between the early days of the pandemic, some key events from before the end of the world, the first 100 days after, and 20 years later, using each section to not just fill in plot details but thematically and emotionally comment on one another. The writing also blissfully embraces episodic structure, often leaving major characters for an entire hour to fill in the role that another will play in this saga. For example, Danielle Deadwyler leads the third episode as Miranda Carroll, the former partner of Arthur. She happens to be the author of a graphic novel called Station Eleven, and she hears of Arthur’s heart attack while she’s overseas, realizing she will probably never make it home again.

Home feels like an important theme of “Station Eleven.” What does it mean when the basic structures of society fall apart? Is it where we are or who we’re with? The phenomenal Irish stage actor David Wilmot plays Clark, who ends up making a new home in an abandoned Michigan airport with a group of survivors there, including Arthur’s new wife Elizabeth (Caitlin Fitzgerald) and son Tyler (Julian Obradors). All of these places and people will intertwine in a way that will undoubtedly seem forced to some viewers but, the biggest inspiration here is Shakespeare—the very plot of Hamlet impacts the narrative—and so there’s an element of “Station Eleven” that should be appreciated as grand, theatrical tragedy.

That’s especially true because of the role that theatre plays in the narrative. This is a story of performers, a famous one who influences a younger one, who then decides that art can’t be lost even as civilization crumbles. It’s also a story of acts of kindness, which becomes its most moving theme for me. Jeevan is the first man to stand up when he senses another person is struggling, and that decision changes the lives of so many people, really setting the entire story in motion—nothing here is the same without it. I’m a sucker for stories of one unselfish act starting a butterfly effect through the lives of others, and when I sat back and considered that aspect of “Station Eleven” after the incredibly moving finale, I was so impressed with how this journey had been crafted. It’s the first show since the end of “The Leftovers” that reminds me of that masterpiece, another program about loss and connection, and what I consider one of the best dramas of all time. (It should be noted that Somerville was a writer on "The Leftovers," so the influence isn't coincidental.)

Like “The Leftovers,” “Station Eleven” can also be charmingly unpredictable. It has a dark, unexpected sense of humor. It balances almost broadly melodramatic scenes of emotion with more surreal moments of unexpected plot. And it doesn’t have a false performance. Davis somehow finds a way to reflect both the voice of reason that Kirsten became and the little girl who never went home after her friend died in front of her. Patel is similarly subtle in that he could have overplayed a hero role in Jeevan but finds more of a relatable everyman tone that pays off in the final episodes. He's just the guy who meets the moment and doesn’t even realize that so many people don’t. Wilmot is a natural, charismatic performer. Bernal and Deadwyler only have a few scenes compared to the rest, but they make the most of them. Daniel Zovatto plays a mysterious character who calls himself The Prophet, a walking study in how trauma can form a destructive personality. And then small roles are filled out by vibrant character actors like David Cross, Lori Petty, Enrico Colantoni, and Timothy Simons, among others. I loved every performance.

Again, “Station Eleven” will be too much for some people right now, especially those dealing with the loss of a loved one over the last couple years, but there’s also an incredibly moving undercurrent of hope that pulses through this production. Loss reshapes the world, but it doesn’t stop it from turning. 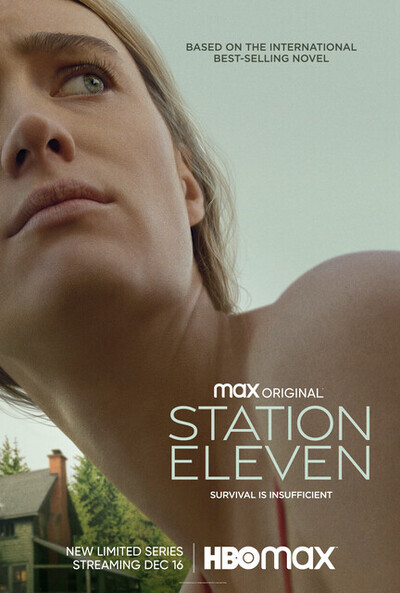 Daniel Zovatto as The Prophet

Lori Petty as The Conductor