Christmas movies are already upon us, and major streamer Apple TV hopes they have a new holiday classic in “Spirited,” a big-hearted-but-clumsy riff on Charles Dickens’ A Christmas Carol with two of the most likable movie stars alive. “Spirited” is like a big goofy puppy in how much it wants you to like it, and that eagerness to entertain can be its greatest strength and biggest weakness at the same time. It’s overstuffed, cluttered, way too long, and ignores some basic tech elements like coherent editing and production design. But there are times when all of that can slip away under the sheer goodwill of the entire thing. It’s almost like a community theater production of an original musical—so very rough around the edges but also pretty easy to root for in the end.

Sean Anders (“Daddy’s Home”) co-wrote and directed this admittedly clever variation on a tale that’s been told by everyone from the Muppets to Bill Murray, but this is a different kind of Scrooge tale. What if the ghosts that haunted Ebenezer Scrooge on that fateful night did the same thing every year to a different troubled soul? “Spirited” imagines an entire spiritual industry built around redeeming one relentless jerk—and, yes, it does get into the idea that so much energy expended on one person in an era of social media hit jobs that manipulate thousands is like a drop in a bucket. Still, facilitator Jacob Marley (Patrick Page) believes there’s value in their process, and he leads a massive team that researches each year’s chosen miser.

The team thinks they have a perfect choice in a Vancouver hotel manager who yells at janitors, but the Ghost of Christmas Present (Will Ferrell) runs into a speaker at the hotel named Clint Briggs (Ryan Reynolds), realizing he is the white whale. Briggs is a social media manipulator, introduced singing a song—oh yeah, this is a full-throated musical—about weaponizing the war on Christmas for profit. He is the kind of businessman who doesn’t see moral lines as long as his client wins, even if the client is his niece Wren (Marlow Barkley), who he convinces to do opposition research and social media shaming on her rival for a position at school. Clint’s assistant Kimberly (Octavia Spencer) looks like she has been worn down by the moral failures of her boss, but Clint doesn’t see himself as a force for bad. He’s just one of those guys who believes that hitting first is the best strategy. (And it’s a minor flaw of the film that the writers seem unwilling to make Clint too “unredeemable” and risk alienating viewers against one of their lovable leads.)

Ferrell’s ghost becomes obsessed with redeeming Clint, even as the other spirits (Sunita Mani plays Past and Tracy Morgan voices Yet to Come) get sidelined. Surprisingly, “Spirited” becomes as much The Ghost of Christmas Present’s tale as it is Clint’s, as Ferrell’s character wants to leave it all behind and become human again, especially after finding an unexpected reason to rejoin the mortal coil.

All of this is told through the hyperactive energy of what feels at times like a draft for a stage musical both in function and form. Musical numbers explode with choruses of backup singers/dancers playing to one side of a set as if they’re on a stage. The sense that you’re watching a filmed stage musical extends to the production design, which often looks like cheap sets or green screen backgrounds instead of actual physical spaces. And the writing has that Broadway tendency to hit a few of the same beats over and over again, especially in the final acts of the film, which push this overlong musical to over two hours.

Despite all of those flaws, “Spirited” is a hard movie to slam. There’s a “let’s put on a show” energy in the performances of Reynolds, Ferrell, and Spencer that’s easy to like. No one is phoning this thing in (even if Ferrell might have been served by another singing lesson or two) and that kind of energy can be infectious. Holiday movies don’t have to be perfect. We kind of like them when they’re a little rough around the edges, something that can boost the mood of an entire family over winter break as they’ve turned off their critical weapons and just want something that goes down easy. In that “spirit," this one works.

On Apple TV Plus today. 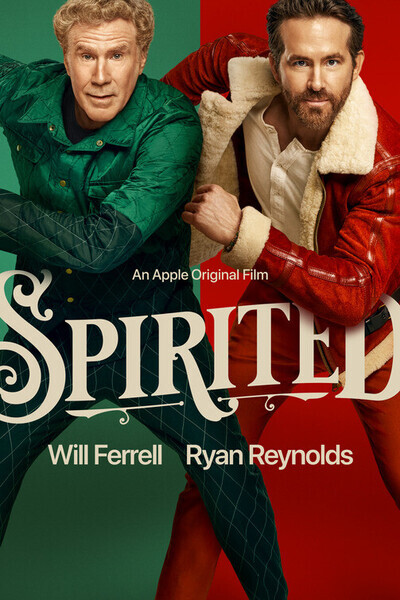 Rated PG-13 for language, some suggestive material and thematic elements.

Will Ferrell as Ghost of Christmas Present

Octavia Spencer as Ghost of Christmas Yet to Come

Sunita Mani as Ghost of Christmas Past