Pablo Larraín’s “Spencer” is a haunting reimagining of a tense Christmas holiday in the life of Princess Diana. Knowing this will not fully prepare you for what you’re about to watch. Larraín’s vision is full of dream sequences, internal and externalized pain, metaphor-heavy dialogue, and Kristen Stewart brooding sensationally under various hats and Diana’s signature short bob haircut. The movie aims to place the audience in its heroine’s state of mind as much as it wants to capture the sense of time of the early '90s and that point in the royal relationship when things begin to disintegrate.

Written by Steven Knight, “Spencer” greets its audience with a word: “A fable from a true tragedy,” setting the tone that what we’re about to see is more fiction than fact. Princess Diana (Stewart) is late to the beginning of holiday festivities. She gets lost in the area where she grew up as neighbors to the royal family, a symbol of how she’s lost parts of herself over the years trying to live up to expectations. Once on royal grounds, she’s greeted by a stern-faced former military officer (Timothy Spall), who’s the eyes and ears of the family. There’s nothing she can do without his knowledge. Now reunited with her boys William (Jack Nielen) and Harry (Freddie Spry), Diana tries to put on a brave face even if she knows her husband Prince Charles (Jack Farthing) is having an affair. Her anxiety and depression start to get the better of her. She begins to see the ghost of Anne Boleyn (Amy Manson), the one-time wife of Henry the VIII who was beheaded so her husband could marry his mistress, as an omen for what will be done to her. Diana finds an ally among her staff in Maggie (Sally Hawkins), but even she is pulled away just when Diana needs her the most. Robbed of her privacy outside and inside the opulent estate, the walls feel as if they were closing in on Diana as she loses her grip on reality until she can break out and save herself.

As of late, Larraín seems fascinated by women held captive by societal cages and how they find an escape route. There was Natalie Portman’s tear and bloodstained performance as the First Lady in “Jackie” back in 2016. Then, most recently, his sexually-charged drama “Ema” found a street dancer breaking with convention, polite society and her choreographer turned controlling romantic partner. “Spencer” shares a lot with “Jackie,” namely the stifling demands made on famous women in designer clothes and grand homes. They may appear to the outside world as having it all, but the reality is much sadder: their cages are gilded, but still a cage.

The latest addition to that cage is Kristen Stewart as a moody Diana, a performance that will likely be divisive among the princess’ defenders. The accent feels hit or miss, as do some of her actions. At times, it seems as if the movie reduces her to a childish state, throwing a fit after being denied her choices to do much else. Knight’s dialogue may be at times blunt and surface-level, and too often doesn’t give Stewart enough much room for nuance. Much of her performance can be described as a doomed brooding or a royal “Melancholia,” unable to pull herself out of that state until she finds a way out of the royals’ clutches.

Larraín’s vision isn’t a straightforward interpretation of the princess’s displeasure with traditions and holiday pageantry. There are sequences with Anne Boleyn that come across pretty heavy-handed, but perhaps the audience’s first hint that this is not your typical biopic is during the first dinner, when a displeased Diana is sickened by the pearls she’s forced to wear by her husband—a set of pearls she knows was also given to his mistress—so she snaps the necklace, sending the pearls all around her, including into her pea soup. Then she proceeds to eat one of the pearls, cracking them painfully with her teeth before the next shot of her running away in pain. Now, the imagined eating of the pearls can be interpreted a number of ways, but the pain of suffering through a dinner with her cheating husband across the table does physically affect her. The blending of her anguish, real and imagined, is intended to keep the audience uneasy and it succeeds.

In order to immerse the audience in Diana’s dissolving mental state, Larraín enlisted composer Jonny Greenwood to create the increasingly unnerving soundtrack, which includes everything from high-pitched strings to the clinking of glass chimes, to demonstrate Diana’s overwhelming experience. Cinematographer extraordinaire Claire Mathon (“Portrait of a Lady on Fire,” “Atlantics”) recreates a somewhat-faded look of photographs from the era, visually matching the scenery and costumes.

Near the end of the movie, a fashion flashback revisits Diana in earlier days of her youth, in some of her most famous outfits, like her wedding gown. This sequence happens after her having been denied going back to her childhood home. She goes anyway and looks at the ruins of her lost girlhood. It is a dizzying moment, created by Larraín and Mathon to look like a fashion shoot out of a cadre of outfits designed by Jacqueline Durran. Guy Hendrix Dyas’ production design of the royal’s holiday home is the most literal interpretation of Larraín’s idea of a gilded cage. It is rich in detail and steeped in grandiosity. Yet when Diana and her boys complain it’s cold, no one dares turn the heat up to accommodate their requests. It’s just another metaphor in this decadent fairy tale inspired by the public’s ongoing fascination with a woman who never had much time in life to enjoy her days outside of her gilded cage.

This review was filed in conjunction with the Telluride Film Festival on September 5th. It is now exclusively in theaters. 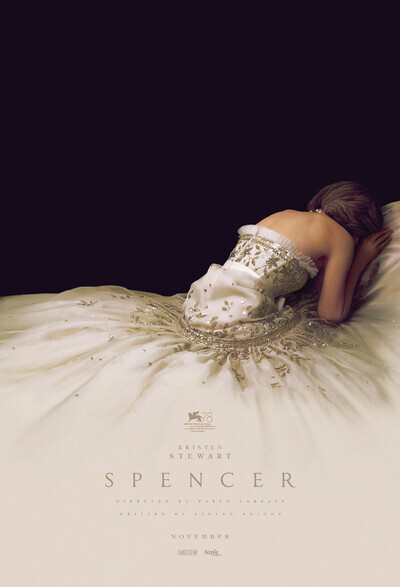