Pablo Larraín’s “Ema” opens with a shot that symbolizes the journey of its title character: a stoplight engulfed in flame. For the next 100 minutes, the multi-talented director of “Jackie” and “No” will present viewers with a protagonist who is tired of waiting at stoplights, one who is ready to watch the world burn. A force of nature who rewires the way she approaches the world after making a life-changing decision, Ema is also a vibrant, passionate dancer. At its best, Larraín’s film captures the expressiveness of Ema's dancing in its narrative, presenting us with a fascinating character study. The talented director and his team, especially cinematographer Sergio Armstrong and editor Sebastián Sepúlveda, can sometimes a feel a little too self-aware—there’s a version of “Ema” that’s rougher around the edges and more reckless—but even that choice kind of makes sense when Ema’s ultimate plan is finally revealed. After all, just because a dancer moves like she’s expressing from her soul doesn’t mean she hasn’t considered her every step.

Mariana Di Girolamo gives one of the best performances of the year as Ema, a young, talented dancer in the small town of Valparaíso, Chile, who has married the director of her dance company, Gaston (Gael García Bernal, also giving a stunner of a performance). But despite some chronological jumps throughout, we don’t meet Ema and Gaston in a happy chapter of their union. As the film opens, intercutting to a mesmerizing stage performance with a backdrop that symbolically resembles both an exploding sun and a fertilizing egg, we are witness to conversations that reveal a recent rupture in the life of this couple. They had a son named Polo, one whom they had adopted and made their own, even if Gaston thinks he was unnaturally close to Ema. However, after an incident involving a fire, they made the unthinkable decision and gave Polo back to the orphanage. The choice has not only turned them into walking ghosts but made them into villains in their community. Well, Ema is a villain at the school at which she teaches, where Polo was just a student, and Gaston is one in the dance troupe.

The decision and resulting dissolution of her marriage sends Ema into a spiral. She begins multiple sexual affairs and her dance routines, set to Reggaeton music, build in intensity that feels like she’s expressing both passion and pain she’s never released before. There’s an incredible number in the film that cuts Ema and her dance colleagues doing routines around this beautiful city with shots of her literally firing a flamethrower into the sky. The women in Ema’s troupe embrace this new form of constant expression, lighting cars on fire when they’re not dancing through the city. As one says, “They think we do this for them, but we do this for us.” It seems like Ema and her dancers are done following instructions from men like Gaston and are finally willing to watch it all burn.

Everyone in “Ema” is strong, especially regular Larraín collaborator Bernal, who gets a few incredibly grounded dramatic beats, but the film belongs to Di Girolamo. Whether she’s literally dancing or flirting her way into multiple romantic affairs, she gives a captivating performance. While Larraín has an undeniably strong eye, this film completely collapses without a believable performer in the title role, one who can sell both regret and passion, sometimes in the same dance move. Di Girolamo never takes a false step.

There are stretches of “Ema” that feel too finely calibrated, a fact that's reflected in an unnecessary scene in which Ema herself explains her actions after a series of stunning revelations. Yet while I wish that “Ema” the film felt as unhinged as Ema the character, those final scenes make it clear this has never really been a movie about a woman on the edge of a breakdown, so much as one about a woman who has decided to do her own choreography.

Now playing in select theaters and available on digital platforms on September 14. 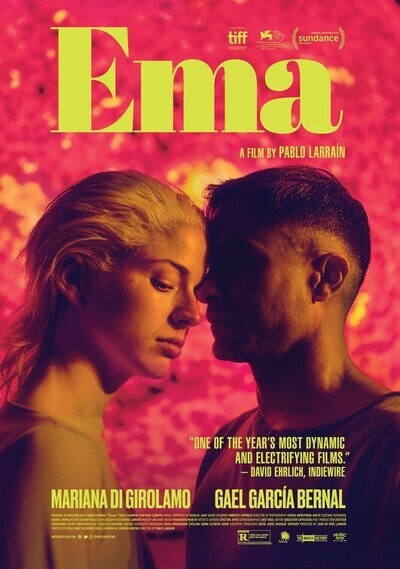