"Spa Night," Andrew Ahn's debut feature as a writer/director, developed in the Sundance Institute's Screenwriting Lab, is an intimate, deliberate exploration of the struggles of David (Joe Seo), a first-generation Korean-American, to live up to his parents' dauntingly high expectations at the same time that the sexual closet in which he lives becomes unbearably stifling. "Spa Night" takes too much time to portray David's achingly slow and incomplete coming-out process, but its focus on the interior maelstrom of a teenager is extremely insightful. David is a dutiful son and a gay kid yearning to be himself in a community where that is just not done.

David lives with his hard-working parents, his mother Soyoung (Haerry Kim) and father Jin (Youn Ho Cho). They came to America as newlyweds, settled in the vibrant "Koreatown" neighborhood in Los Angeles and set up shop with a restaurant. The community is filled with hard-working immigrants owning shops and karaoke bars as well as 24-hour spas, the center of the neighborhood's social life. David helps in the restaurant, goes to church with his parents, works out at home, takes daily runs and privately takes photos of his developing six-pack abs (but he is far too shy to share these online). David has no friends and no contact at all with an "out" demographic. He's not a good student and apathetic about his SAT prep. He's uncertain about how to tell his parents that 1.) college might not be for him and 2.) he's gay. Both statements are unthinkable, and Ahn's sensitive script and eloquent framing helps provide the context necessary to show why.

When he visits a childhood friend enrolled at USC, David is a fish out of water, baffled by the partying and uncomfortable at the rampant heterosexuality. When his friend mentions that his roommate has a "boyfriend," David is shocked at the openness of acknowledgement. In the middle of his identity crisis, his parents receive a devastating blow when they lose the restaurant. There's a haunting shot of David and his parents standing outside the plate glass window, staring in at what was once their domain. It was more than a restaurant. It was the American Dream. It was David's future. With his parents descending into panic, David focuses on getting a job. He sees a "Help Wanted" sign at a male-only spa, applies, and gets the job. As he mops the floors and puts out towels, he senses all around him the pulse of illicit sexual activity. It's excruciating and intense.

Ahn and his cinematographer Ki Jin Kim film all of this in widescreen, creating a sensual mood, scenes drowned in steam or blue light. Confidence like Ahn's comes from confidence in the story he wants to tell. "Coming out" may be a rite of passage but each story is different, each person has different pressures. (Similar to Stephen Cone's "Henry Gamble's Birthday Party," "Spa Night" is as much about the surrounding social context as it is about David's sexual awakening.) Ahn lingers his camera's attention on body parts: chests, legs, arms and hands, a potent tease to the repressed David. "Spa Night" is refreshingly casual about male nudity, but David is so torn that "putting off" sexual self-expression is a way of life. He lives in a hothouse bell-jar of his own unspoken yearnings, stealing glances at naked men emerging from the sauna, realizing that hook-ups are happening all around him. Those who expect the story to unfold in the conventional way, with a hidden love affair, or sexual liaison, with his parents "finding out," may be disappointed at the film's focus on yearning, as opposed to acting.

Haerry Kim and Youn Ho Cho as David's parents are superb, and it is astonishing that this is Cho's first credit. What a performance! David's father is emasculated by his failure to provide for his family and for David's future. He reacts by getting drunk every night. His heart is broken. He explodes at David at one point: "We didn't move here so you could move furniture! Go to college! Get a girlfriend! Get out!" "Spa Night" is as much the story of David and his parents' struggles as new immigrants, cut off from family back home, as it is about David's sexuality.

There are a couple of drawbacks to the film's deliberate slow pace. David knows who he is but is trapped in the closet with no way out (that he can see.) "Spa Night" presents the problem and offers no easy solutions. This is a good thing, since films are not required to offer solutions, but "Spa Night" is too static and repetitive. The film is admirable in presenting the issues a gay kid faces in an extremely specific environment, and for resisting a more conventional storyline. But there is a clouded aspect to the approach which may be appropriate to David's journey but is difficult to withstand over the course of the film. "Spa Night" is not "Appropriate Behavior," where a first-generation Iranian immigrant lives an entirely double life, cut off from full integration in both worlds. This is the story of a boy willing to put off embracing his identity until ... well, until when is not clear. David's apathy and passivity hold him back, hold the film back.

Even with its flaws, "Spa Night" is an extremely personal film. We need more of those. 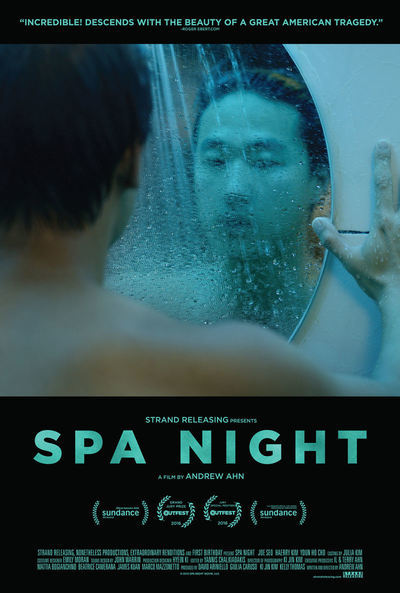