The fragility of daily existence is captured empathetically and compassionately in Darius Marder’s excellent “Sound of Metal,” a film that should catapult Riz Ahmed to the top of any producer’s casting list. His work here is a model of restraint, a performance that goes for the effective low-key choices instead of the broad emotional ones every time and is all the more powerful by feeling more genuine. Films about life-changing events often play to the cheap seats, turning up the melodrama to tug at the heartstrings, but Marder and Ahmed have collaborated here on an incredibly refined character piece. It’s a movie that doesn’t just allow for silence but thrives in it, with Ahmed’s eyes and body language charting the arc of his character. He doesn't miss a beat.

The star of “The Night of” plays Ruben, a heavy metal drummer accompanist to his singer-girlfriend Lou (Olivia Cooke). Marder and his co-writer/brother Abraham (the script also has a story credit for Derek Cianfrance, who worked with Marder on “The Place Beyond the Pines”) waste no time getting to the meat of their story. Mere minutes after meeting Ruben and Lou, we’re watching the drummer realize that his hearing is drastically disappearing. This is not a mere ringing in the ears or minor hearing loss. At his first meeting with a doctor, he gets word after word wrong, and he’s told that he’s lost 80-90% of his hearing, and the rest will likely soon follow. With a few exceptions, Ahmed plays it subtle, conveying the quietness that often comes with fear and denial. He can play through it. He can get surgery. Everything will be fine. Let's go to the next show.

However, Lou knows there’s another problem to consider—Ruben is a recovering addict. He’s been clean for four years, but she knows that trauma often leads to relapse, and knows that Ruben needs focus or he will destroy himself. How many of us have pushed away our demons or even just our character flaws with activity and noise? We so often distract ourselves from our darkness through any means necessary. Imagine becoming an expert at something like drumming only to have it all ripped away, and then imagine not being able to use the standard crutches that you did so often in your life to make yourself feel better. “Sound of Metal” will be classified as a drama about deafness, but addiction is a notable part of this story, and just as accomplished.

Lou rushes Ruben to a facility run by a man named Joe (Paul Raci), who tells the drummer that this is not a place to fix him. It is a place to teach him how to live with deafness, not to correct it. In a sense, it is a different kind of rehab facility. The bulk of “Sound of Metal” takes place here, and again Ahmed achieves so much nuance with Ruben’s journey. He plays him mostly as an observer, watching deaf kids learn in a classroom or listening to Joe’s advice. Joe pulls even more distractions away from Ruben, forcing him to sit and write his thoughts and feelings. In many ways, “Sound of Metal” is a movie about a restless soul forced to find calm and peace.

The other star of “Sound of Metal” for most people will be the sound design. Marder regularly puts us in Ruben’s state, hearing muffled sounds or unintelligible conversations. In fact, it’s interesting to note when Marder traps viewers in Ruben’s auditory condition and when he allows us to escape it (the latter often happens only when Ruben could otherwise “hear” the conversation, such as in a speech-to-text program used by Joe). It’s also notable that Marder doesn’t use a manipulative score, allowing the silence to dominate. It’s a shame that most people will see this on Amazon Prime, as it’s not a film conducive to distractions. Put down the phone for this one. Let the quiet sink in. Or better yet, watch it with headphones. It's a film designed to envelop you, and not merely play in the background.

As much of a breakthrough as the sound design is here, it really is Riz Ahmed’s movie. It’s no surprise that he learned how to play drums in the six months before shooting and studied deafness. It just speaks to the depth or performance. There’s not a single scene or emotional beat that feels false.

It’s another film that reminded me of Roger’s belief that movies are empathy machines, but I thought about it in a slightly different way here. It’s not just the elements of a story that make a movie an empathy machine, or even the intentions of a filmmaker. For it to really work, a performer needs to have that same empathy for his character. He needs to find a way to balance the unimaginable drama of something like going deaf with relatable humanity. One can see that empathy in every choice Ahmed makes in “Sound of Metal.” It’s inspiring.

In limited theatrical release today and available on Amazon Prime on December 4th. 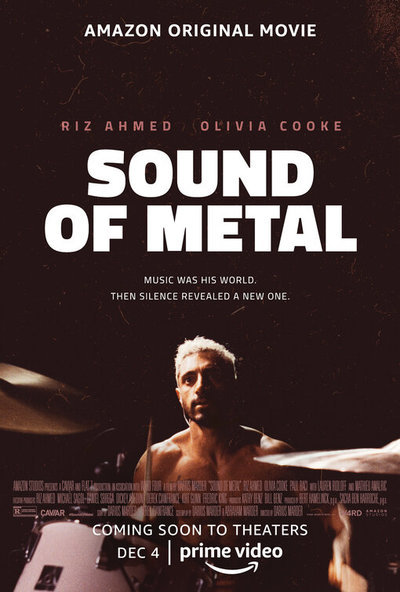 Rated R for language throughout and brief nude images.