Tattoos and motorcycles, cops and robbers

We begin the movie by following a tattoo-spangled man as he makes his way through a carnival crowd, arriving in a tent containing a few hundred cheering fans and a globe-shaped metal cage. This audacious, extended tracking shot will be familiar to fans of Martin Scorsese (and before that, Orson Welles), and it immediately tells us we are about to experience of film of considerable ambition. You don't even try to make a play like that unless you have confidence in your creative arsenal.

The man straps on his helmet and climbs on his motorcycle, and he and two other daredevils are soon zipping past and around each other inside that metal cage, racing around and around and upside down, defying gravity and all common sense.

We end the movie with another young man on another motorbike, racing to avoid his fate, blissfully unaware the path he has chosen is most likely to take him to the very place he wants to avoid. It is a final shot of heartbreaking perfection.

Shaking up the cinematic doldrums of early spring, here comes "The Place Beyond the Pines," a self-confident, self-aware, almost cocky piece of filmmaking from the immensely gifted Derek Cianfrance. It is an epic film centered on pivotal moments in the lives of working-class and fringe-society types who wake up every morning and go to bed each night with the same question hanging over their heads: how are they going to make ends meet?

Few if any leading men in Hollywood have hotter careers right now than Ryan Gosling and Bradley Cooper, but "The Place Beyond the Pines" is anything but a slick, dual-star vehicle. An outstanding supporting cast and an immensely talented creative team join Cooper and Gosling to put together a film that touches greatness.

This is an ambitious work in three acts, with each chapter taking surprising, sometimes shocking turns. All tattoos and deliberate mannerisms, Gosling is mesmerizing as Luke, the daredevil motorcyclist and small-time crook we see in that memorable, dialogue-free opening sequence. With his ripped T-shirts, bleached-blond hair, bulging biceps and tattoos that cover his torso, creep up his neck and even appear at a corner of one eye, Luke is a startling presence. But he speaks quietly and moves deliberately (when he's not on his motorcycle), like a caged animal waiting for his chance to pounce.

Eva Mendes gives one of the best performances of her career as Romina, a sultry waitress who is the mother of Luke's infant son — the result of a fling the last time Luke was in town. Romina's got a new man now, and she's trying to make something of herself by going back to school, but she's clearly drawn to Luke, even though she knows he's the wrong man to help raise their child.

Clueless and desperate, Luke begins robbing banks to provide for the boy. It's a wrong move followed by a series of even worse decisions.

On a mostly parallel track in the same town (Schenectady, N.Y.), is Bradley Cooper's Avery, a cop and law school graduate who's smart — but not as smart as he thinks he is. (Witness that awful haircut and the hideous jacket he wears everywhere he goes.) Avery's also nakedly ambitious, as we see when he attempts to parlay a heroic act into a huge promotion.

After Avery crosses paths with Luke, "Pines" takes a hard right turn, and we're immersed in a world of crooked police officers and life-changing moral dilemmas. We've seen Ray Liotta play a corrupt cop before, but nobody does it better. A scene in which Liotta and several other cops arrive unannounced at Avery's house and essentially invite themselves to dinner is almost unbearably tense, despite the outward smiles and bursts of laughter at the table.

The third act is about the sons of Luke and Avery, some 15 years down the road. There's some terrific acting here, and the script remains compelling, but this story isn't quite as riveting as the first two-thirds of the film.

Huge applause to Derek Cianfrance and his co-writers for creating a movie that announces its ambitions from that opening sequence. The music, the cinematography, the acting choices, the daring plot leaps — not a single element is timid or safe. There are small coincidences with huge consequences, as characters struggle to escape their past, to change their seemingly inevitable fates. "The Place Beyond the Pines" earns every second of its 140-minute running time. 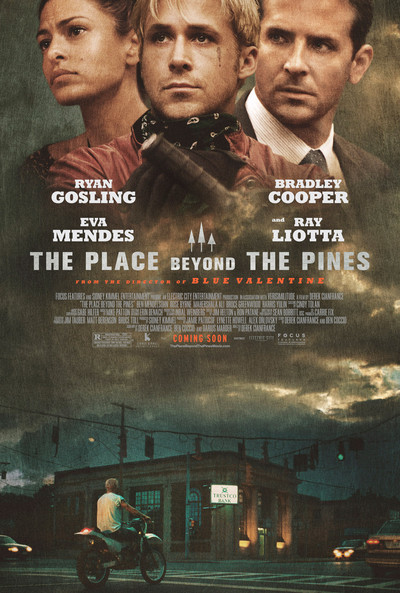 Rated R for language throughout, some violence, teen drug and alcohol use, and a sexual reference