With all the nuance of a troll screaming "First!" on a message board, Adam Mason's "Songbird" is a film that arguably shouldn't exist. As legitimate concerns rise about people refusing to take the vaccine that could save us from the nightmare that is 2020, Mason and producer Michael Bay take the national anxiety about COVID-19 and warp it into (allegedly) escapist filmmaking. I’m not big on the “too soon” argument of criticism, but there’s something undeniably off about a movie that uses COVID as a device on a day when more people will die from the disease than on 9/11. A talented filmmaker could use that discomfort to find a greater truth. That's not this movie.

The truth is that even if one sets aside all potential moral arguments about the very existence of "Songbird," it's still just really bad. If you're going to make a movie this exploitative and gross, you really have to make it better to disguise the smell of it all. Everyone here, including Mason and co-writer Simon Boyes exudes that feeling that their premise is so clever and so unexpected that that's all that needed to be done. First!

“Songbird” sets its troll tone early with a segment that includes the line “Remember the good old days of fake news?” (Let me speak for everyone when I say, “NO.”) You thought 2020 was bad, you ain’t seen nothing yet! In just four years, the virus has mutated to the COVID-23, which has completely reshaped existence. There’s martial law in Los Angeles and something called Q-Zones, where sick people are basically taken to die, cut off from supplies. Bike messengers like Nico (K.J. Apa) are essential in this dystopia because they can get through the now-divided city of Los Angeles, especially because the young man happens to be one of the rare people immune to the disease. He wears a bracelet that affirms his immunity status and allows him safe passage, typically under the GPS-guided instruction of his boss Lester (Craig Robinson).

Nico has a girlfriend named Sara (Sofia Carson), who lives with her grandmother (Elpidia Carrilo), but the star-crossed lovers only really get to communicate through FaceTime and closed doors. Zoom is apparently the future. Get used to it. It’s how a musician named May (Alexandra Daddario) communicates with her fans, including a recluse named Dozer (Paul Walter Hauser) and a power player named William (Bradley Whitford), who happens to be sleeping with May. Yes, social encounters involve a face shield and mask at first, but not for long. William is married to Piper (Demi Moore) and is the father of Emma (Lia McHugh), he’s clearly found a way to profit while the world has fallen apart. Those are usually the bad guys. So is the slimy Emmett Harland, the enforcer when people get sick, played with B-movie relish by Peter Stormare. At least he seems to be having a good time.

Of course, Sara’s poor abuelita gets the disease and it looks like she’s going to be shuttled off to the Q-Zone never to be seen again. Nico races through Los Angeles to get an immunity bracelet like his to save her. All of the characters who have barely shared actual screen time are loosely tied together in a movie that’s ultimately incredibly thin on plot in the end. It should be noted that the filmmakers were keen to use real-life death as a backdrop but don’t have the courage to approach anything in terms of politics or social issues. That might have given a shallow movie some much-needed depth, or at least felt ambitious.

Michael Bay may have only produced “Songbird,” not directed, but his influence is all over it. To beef up the thin story, Mason shoots from low angles, over-lights in that very Bay way, and chops up the editing so much that one expects to spot a Decepticon on the horizon. It’s all meant to disguise the nothing of it all. Any time the film threatens to become about more than its premise, or deliver on an entertainment value, it slips through your fingers. The secondary characters pull from what could have been a movie that focused solely on a desperate soul trying to survive. It's an incredibly frustrating film that feels like it’s constantly getting distracted from the story it should be telling, bored by its own ineptitude. You will be too. 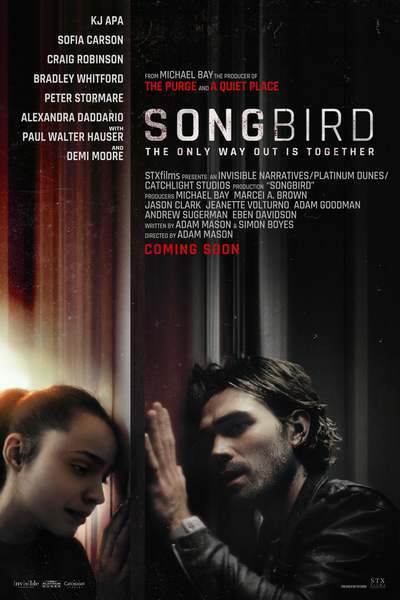