Netflix’s Romantic Comedy Revival continues with a new twist. Instead of another sweet, lovey-dovey move a la “Set It Up” or “To All the Boys I Loved Before,” their next release, “Someone Great” starts with a breakup. The feel-good relationship at the heart of this movie isn’t found in the arms of a new man, but in the bonds between close friends. Jenny (Gina Rodriguez) is a driven writer who just landed her dream job at a publication across the country. The news finally breaks the crumbling relationship with her longtime boyfriend, Nate (LaKeith Stanfield). They break up, and then she cries—a lot. She quickly rallies her old friends, Blair (Brittany Snow) and Erin (DeWanda Wise), to triage her emotional state with booze, drugs, and a concert.

“Someone Great” is an impressive feature debut from writer/director Jennifer Kaytin Robinson, the creator behind MTV’s “Sweet/Vicious.” The New York City-centric day-long arc manages to cram in a lot of mischief between Manhattan and Brooklyn. Although some of the movie’s details about the media industry are more fantasy than reality, its core story of coping with heartbreak through friends and escapism holds true. There are jokes about the setting and how everyone the women knew from their NYU days has moved to Los Angeles, and there are many jabs about the uncertainty of turning 30 and feeling like they should have married or accomplished something great. These lines never bring down the movie’s lighthearted tone, which bops along to a pop music soundtrack made up of some favorite songs and new hits. There’s even a hilarious sing-a-long moment to Selena’s “I’m Dreaming of You,” which is both a great song to listen to post-breakup or during a relationship.

Although the characters tend to lean heavily on caricature, Rodriguez, Wise, and Snow seem to have plenty of chemistry with each other. Before her break up, Jenny looked like she had it all figured out when it came to her relationship and career. Blair, on the other hand, had already settled into a loveless relationship before turning 30. Jenny’s pre-30s crisis causes her to reevaluate her situation. Unlike her two straight friends, Erin is fine staying uncommitted until her partner, Leah (Rebecca Naomi Jones), asks her to take the next step in their relationship. The group seems overly fond of Internet slang, but the trio’s connection feels heartfelt. Their dynamics shifts to help out whichever friend is in need, like when Jenny helps pry Erin out of an awkward conversation with Leah or Erin confronts Blair about her shallow relationship. Plus, there are delightful appearances by RuPaul, Jaboukie Young-White, Rosario Dawson and Questlove throughout the film to keep things lively.

Kaytin Robinson’s movie has a sleek look that gives its messy breakup story more of a polished finish, and cinematographer Autumn Eakin uses the bright pink and white of stylish apartments and the neon and jewel tones of New York nightlife to color in this freewheeling day-to-night journey. Focus plays a distinct factor as well: Jenny’s flashbacks to her relationship are in soft focus, like idealized memories of old romantic comedies, while sharp focus is used for the time she spends with friends, reflecting on the hard reality she must come to accept.

“Someone Great” does not refer to a person. That search for the perfect partner may not be what these women really need at this moment in their lives. For now, they have each other, and the movie wants us to enjoy their company as much as we would enjoy our time with our friends. It’s a fluffy romp with a sobering truth: relationships and your twenties may end, but neither signals the end of the world. 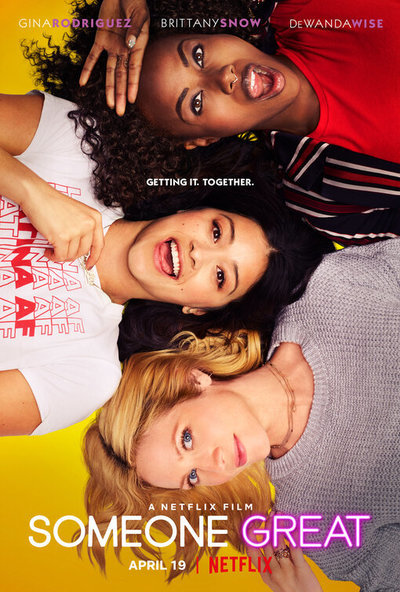