So Late So Soon

“So Late So Soon” is a documentary about Jackie and Don Selden, a pair of artists living in Chicago. Of the two, Jackie is definitely the more energetic as she wholeheartedly throws herself into the creative process—in the opening scene, she uses string to create a giant spider web in the middle of their kitchen, complete with a cow at the center, while Don is the more laid-back. This might make Daniel Hymanson’s film sound like a portrait of a couple of artistic types learning to live and work with each other with their entire lives, both personal and creative, stretched out in front of them. But that is not the case, for Jackie and Don are elderly, have been married for five decades, and are finding all aspects of their lives being affected by the inevitability of the aging process.

For Don, this adjustment is relatively easy. Although a prominent artist in his younger years—one of his most famous creations being a papier-mâché rhinoceros that is still standing—he has now become more of a homebody whose lifestyle is not particularly active. For Jackie, however, the transition is far more difficult—a sculptor and photographer who also taught art to children for decades, she struggles mightily with the fact that while her creative process and energies are still firing on all cylinders, she no longer has the energy that she once possessed. As a cruel irony, much of Jackie’s work over the years has used the passage of time and impermanence as a theme and now she is experiencing it for herself first hand. Don does not understand why she continues to push herself, Jackie becomes frustrated by the way that he seems to have just given in and as a result, a schism begins to grow between them that only frustrates the situation even further.

Knowing that he has a couple of undeniably fascinating characters at the center of his movie, Hymanson is content to hang back, filmmaking-wise, and simply let them be themselves. This gives the film an almost voyeuristic quality that is sometimes painful to watch, especially in the scenes in which the frustrations of age, not to mention the various problems regarding the state of their cozy-but-dilapidated home, inspire full-blown arguments that end in long and uncomfortable silences. Hymanson also weaves in old television interviews and films of the two in their youth that allows us to see them in their prime. This contrast might seem a bit on the crashingly obvious side, I suppose, but by showing us this material, we get a better sense of how they developed into the people that we see in the current-day footage. We also understand more how their relationship, for all the recent difficulties, has continued to endure.

“So Late So Soon” does not exactly reinvent the wheel in terms of documentary filmmaking, and I suspect some might find it simply too depressing to sit through. But for the most part, "So Late So Soon" is a moving and thoughtful meditation on the inevitability of aging and mortality and the unstoppable lure of the creative process. 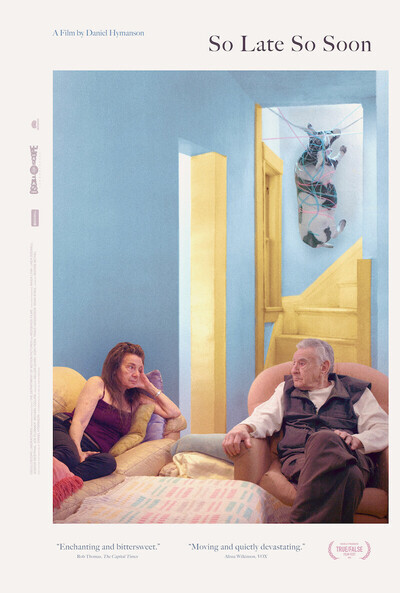 Jackie Seiden as Herself

Don Seiden as Himself