Why must I be a teen zombie in love?

As much as I enjoy "The Walking Dead" on AMC and movies such as "28 Days Later," one of my ongoing complaints about the explosion of the zombie genre is the general mopery and overall predictability of those ever-staggering creatures.

They lurch. They snarl. They sniff the air for the scent of human flesh. They pounce and gnaw. They pound windows and doors, and express frustration when confronted with 10-foot-high cyclone fences. And then they get shot in the head and die.

That's pretty much it. We almost never get inside the rotted mind of the zombie or see things from the zombie point of view. They're forever penned in as the Big Metaphor.

One of the many exhilarating pleasures of "Warm Bodies" is the flipping of that script. This is a bloody fresh twist on the most popular horror genre of this century, with none-too-subtle echoes of a certain star-crossed romance that harks back to a certain bard who placed a certain young Romeo under a certain balcony.

I kinda love this movie. "Warm Bodies" is a well-paced, nicely directed, post-apocalyptic love story with a terrific sense of humor and the, um, guts to be unabashedly romantic and unapologetically optimistic.

Looking a little like a boy-band heartthrob who won first place at a Hollywood Halloween party thanks to a a professional makeup job and an artfully bloodied red hoodie, Nicholas Hoult gives an earnest and winning performance as "R," who could be a character in "The Perks of Being a Wallflower" or a John Hughes movie, if not for the small fact he's undead, having been recently zombified. (R's attempt to fill us in on the exact nature of the zombie apocalypse is one of the film's many affectionate nods to the all-too-familiar elements of so many zombie TV shows and movies.)

Unable to recall even his full first name (he's pretty sure it begins with the letter R), the kid knows he's a zombie and doesn't deny his hunger for living human flesh — but there are still traces of a real person inside. He spends his days lurching about an airport where he imagines the previous lives of his fellow zombies, listens to music in the grounded airplane he's converted into something of a condo and establishes the beginnings of a bond with M (Rob Corddry in a scene-stealing performance), who also seems to have more than a trace of his former humanity still lurking deep within.

Working from Isaac Marion's short story-turned-novel, writer-director Jonathan Levine infuses "Warm Bodies" with stylistic flourishes and winking in-jokes — some of them subtle, some so obvious characters are compelled to comment on them. ("What? It's funny!" says the delightful Analeigh Tipton when she chooses a particular song to accompany a makeover montage.)

Humans. They're scarred from seeing spouses, children and friends turned into zombies or killed, but they're armed and they WILL shoot any corpse that comes within growling distance of their walled city.

Zombies. Wandering the streets, living in airports and warehouses, always on the alert for the next human meal. Maybe hopelessly lost. Maybe not.

"The Bonies." Zombies that have given up all hope and have resorted to tearing off their own flesh, leaving behind skeletal killing creatures that would just as soon take down a zombie as a human.

There's a key difference between the dead and the really and truly dead — a difference that comes to light when R strikes up a bond with Julie (Teresa Palmer). Granted, their "meet cute" involves mass slaughter and the consumption of one character's brains, which allows a zombie to access a dead character's memory. But other than those small details, the courtship of R and Julie isn't all that different from what we've seen in any number of human/human as well as human/supernatural creature romances, including the "Twilight" movies. Hoult and Palmer have a lovely, natural chemistry, even when the circumstances are grisly or silly — or both.

Perhaps recognizing there's no way he can out-crazy the material, John Malkovich actually delivers a relatively restrained performance as Julie's father, who of course is the leader of the military force that believes in shooting first, asking questions never. This guy's so hard-core, he probably wouldn't let his daughter date Tim Tebow, let alone a zombie who's desperately trying to get in touch with his human side. ("That could have gone better," says Julie with deadpan understatement after Dad finally meets R.)

"Warm Bodies" isn't perfect. It's a shame those Bonies are mediocre special-effects creations that run with a herky-jerky style that would have been mocked by the 1991-era "Terminator 2: Judgment Day" liquid-metal dude. Some of the musical choices are too broad and easy. And even after we get the message, the message is delivered at least two or three more times.

But those are minor drawbacks. Clocking in at a brisk 97 minutes, "Warm Bodies" is terrific entertainment.

A lot of zombie movies have heart — but usually the heart ends up on someone's plate. Cheers to "Warm Bodies" for taking us in a different direction for a change. 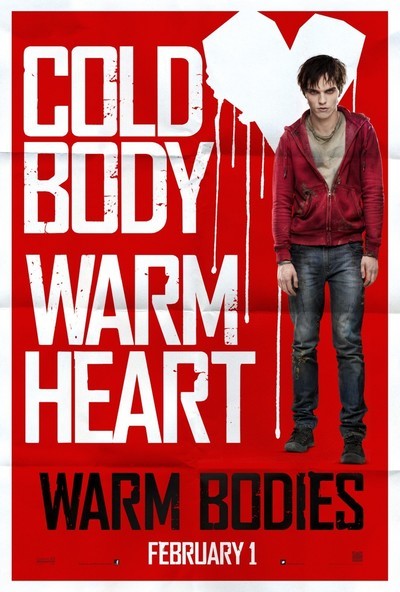 Rated PG-13 for zombie violence and some language