“You know what it's like to be a mother,” Dai Mah (Jade Wu) tells Sister Tse (Shuya Chang) near the climax of writer/director Evan Jackson Leong’s “Snakehead.” “You see your faults in your children. You just wish you had done better.” Tse doesn’t yet know what faults she sees in her own daughter; after giving her up years earlier, she is now following the oblivious teenager around New York City’s Chinatown. There’s hope for a reconciliation—in fact, it’s the reason Tse was brought from China by a “snakehead” or smuggler who brings migrants into the country illegally. Now in service of Dai Mah, to whom she owes a $57,000 debt for the trip, Tse must work it off doing a variety of unpleasant tasks. However, despite the protests of Rambo (Sung Kang), the son Dai Mah sees too much of herself in, Tse has become a favorite and trusted confidant who may one day take over when Dai Mah’s time has passed.

This is a familiar story with few plot surprises. What works is how Leong’s screenplay refuses to let anyone be pitied or wallow in victimhood. This plays as a meditation on survival in an inhospitable circumstance. No one sees America as the land of milk and honey myth it’s selling, not even those who have managed to make capitalism work for them. When Zareeb (Yacine Djoumbaye), another immigrant in a similar debt situation, asks what she thought New York would be like before she got there, Tse responds “I didn’t think. I just came.” Though he’s not naïve, Zareeb has a sense of optimism about his plans once he’s no longer indentured. Unlike Tse, he’s certain about the desired outcome. Knowing what happens to his type of character in movies like this only makes us worry about his chances.

Tse won’t give us any reasons to fret. She bristles at the mere thought she has little control over her destiny, and is unafraid to make known what she will and will not do to earn her freedom. Though she tells us in narration that her primary purpose post-smuggling was prostitution, she immediately proves herself unsuitable for the job by beating the hell out of a guy abusing one of the massage parlor workers. “This is for the weak,” she growls. “I am not weak.” This gets Dai Mah’s attention, much to the chagrin of Rambo.

Viewers may recognize Sung Kang from his work as Han in the “Fast and Furious” series. Here he’s involved with a different kind of “family,” though its leader is as adamant about familial importance as Vin Diesel. As Tse gets deeper into the inner workings of this Chinatown criminal empire, Dai Mah repeatedly refers to her as part of a close-knit, though dysfunctional unit. Even her nickname, “Sister” Tse sounds like a relative in a clan that also includes a “Ma.” The only word we hear more than family is “weak.” No fewer than three characters vehemently deny they are weak, then prove their point with varying degrees of violent success.

Though it has several action sequences, “Snakehead” isn’t as concerned with providing the expected kind of empty thrills. Leong is more interested in human nature and what people tell themselves to prepare for the often miserable things the underprivileged must do to eke out a tolerable existence. He also senses the chemistry between Chang and Wu and exploits it for maximum effect. It’s not a mother-daughter relationship, even though Dai Mah at one point explicitly describes it as such. This is more of an apprenticeship. The elder woman is impressed with just how hardened her trainee is, how she consistently refuses to back down. This appears to be intrinsic for Tse; Dai Mah explains she had to learn this skill the hard way.

Wu is quite memorable here, underplaying where others might have been inclined to grandstand. Her character is basically Chinatown’s Don. Everybody knows and respects her. Clearly, this didn’t come from her being a nice lady (“there’s a difference between respect and fear,” she warns Tse), but her demeanor barely hints at just how ruthless she is. When you’ve made it to this point, you don’t need to raise your voice; your reputation precedes you. Instead of fear, Wu casually displays a callous disregard, a coldness that barely rises to the surface even when she’s slitting someone’s throat. Dai Mah is a memorable villain, a perfect match to Sister Tse’s well-played antihero.

Chang and Wu are so good, they even sell a cliched scene where one says to the other “you and I are two sides of the same coin.” I can forgive those heavy-handed trespasses because I had so much fun watching this actorly battle. Their last scene together is such an on-the-nose symbolic visual that you might miss the subtle beauty of what each of them does. “Snakehead” entices you with a lurid premise, but the empathy that shines through the cracks of its tough exterior is the real surprise. 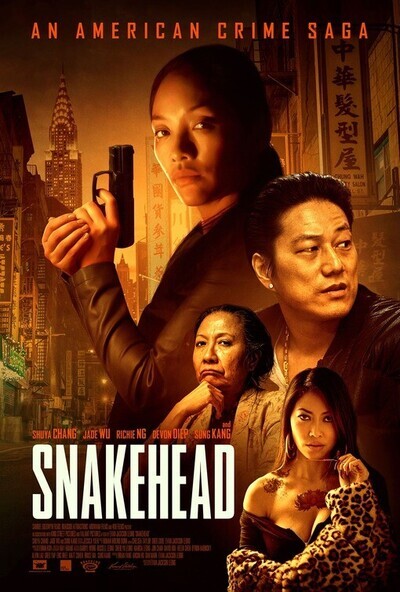