“Education” is the fifth and last installment in Steve McQueen’s “Small Axe” series, but for a brief moment, “Small Axe: Red, White and Blue” appeared to mark the end. I bring this up for two reasons: First, I alluded to this incorrect order in my review of what is now the third feature. Second, the new placement made me run a parallel train of thought as I watched “Education,” because the tone and story completely changed what I thought the arc of McQueen’s opus was. To be clear, each of these films stands on its own merits, and I have reviewed them as such. However, when taken as part of a whole, this film leaves us with a different set of final questions than “Red, White and Blue” did.

McQueen and his co-writer Alastair Siddons focus for the first time on someone who is not an adult. 12-year-old Kingsley Smith (Kenyah Sandy) is fascinated by the stars and, like many kids his age, has aspirations of becoming an astronaut. “Education” begins with him in the Planetarium, observing the show while an enormous smile breaks across his face. Science fascinates him, but in class, Kingsley has difficulty reading. His teachers brutally yell at him, either for struggling in class or horsing around like a typical 12-year-old kid. His infractions are treated more harshly than other students, culminating in a meeting between his mother Agnes (Sharlene Whyte) and the school headmaster (Adrian Rawlins).

Agnes works two jobs, including a nursing gig, to help put a roof over her and her children’s heads. Her husband Esmond (Daniel Francis) works as a carpenter. The headmaster doesn’t know anything about Agnes’ life or skillset, yet he treats her condescendingly as he explains that Kingsley is being sent to a “special school” because he’s disruptive and his I.Q. scores are below average. This new school, Durrants, is so far away that a bus will shepherd Kingsley and other students back and forth every morning. “I am the messenger of good news,” the headmaster reassures Agnes. It will not be the last lie he tells her.

“Nothing but a heap of trouble!” is how Kingsley is described by his mother. His older sister, Stephanie (Tamara Lawrance) has more time and patience for him. It is she who first becomes suspicious when she reads the pamphlet describing Durrants. Kingsley is more attuned to what’s happening than anyone else in his family. “They’re sending me to a stupid school,” he says. It’s worse than that. Durrants’ description of its students says it all: these kids are “educationally subnormal.” The teachers don’t care, that is, if they show up for class. Nothing is taught and, after graduation, the stigma of having attended one of these institutions marks you for life as someone who can only do the most menial of jobs and live in the poorest housing.

All of this is documented in the book given to Agnes by Lydia (Josette Simon), a former politician who is now involved in exposing the English educational system for setting West Indian students up for failure. Lydia learns that Kingsley is at Durrants when her colleague Hazel (Naomi Ackie) meets him while infiltrating the school to collect incriminating evidence. She finds plenty. The children are running around unsupervised when Kingsley brings her to his classroom. Lydia tries to explain the rationale for sending so many West Indian children to educationally subnormal schools. “The schools say their test scores are being eroded by the West Indian children,” she tells Agnes, who remains unmoved by this information. Eventually, she attends a meeting chaired by Lydia’s group and has her mind changed by the horror stories of other parents.

Like the rest of the “Small Axe” films, “Education” takes place in the past but feels exceptionally timely today. It describes a school-to-prison pipeline using schools like Durrants, but also indicts the schools that send children there, often just to get rid of them. If a student feels like the teachers don’t care about teaching, perhaps he or she won’t care about learning anything, either. This downward spiral gets repeated on a regular basis, especially where Black and brown children are concerned. One gentleman at Lydia’s meeting mentions that he can’t read nor write due to having never gone to school, yet his grandson also can’t read or write despite spending 12 years attending classes.

This is heavy material, to be sure, but it’s not without dark humor. A scene of a Durrants teacher passing time by singing “House of the Rising Sun” to the class while poorly playing the guitar goes on so long that it becomes hilariously surreal. And the script wrings some laughs out of the prayers of the Smith children, one of whom asks not only to be an astronaut but to also play for Tottenham. God is probably not going to deliver that, but McQueen and his actors do deliver one of the most devastating yet moving scenes in the series: Agnes forces Kingsley to reckon with his inability to read, then reassures him of her determination to fight the system.

“Education” ends with what I think is the type of education the title indicates. I won’t spoil it, because it’s such an inspiring surprise. But there’s a hint that darker times still lay ahead: One of the avenues to earn reinstatement to regular schools is for the parents to write to the Secretary of State, who just so happens to be Margaret Thatcher. This leads me back to that parallel track I mentioned at the top of this review. Both “Red, White and Blue” and “Education” end without a definitive conclusion to the story, and both end with flashes of hope. Yet the former’s ambiguous last scene is more cynical about the troubles to come. This film brings a more optimistic end to the series, forcing me to reassess my own conclusions. “If you are the tall tree, then we are the small axe,” the saying goes. Perhaps that axe is symbolically small because it is being wielded by a tenacious youngster like Kingsley. 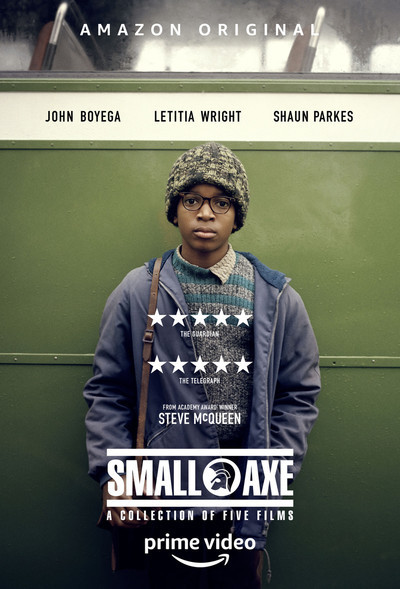