“Red, White and Blue” is the third episode of Steve McQueen’s “Small Axe” series to be screened at the New York Film Festival. It follows “Mangrove” and “Lovers Rock,” the first and second installments respectively. This is the fifth and final one. I have not seen “Alex Wheatle” and “Education,” as they will premiere on Amazon. Of the three NYFF presentations, “Lovers Rock” feels a bit like an aberration in its lightness, a thankful respite compared to its more grueling cinematic siblings. Yet, it fits seamlessly in conversation with the other films.

The festival’s selections allow us to view and compare the show’s bookends. “Red, White and Blue” and “Mangrove” are true stories about real people seeking justice and reform for incidents of police brutality. They both contain jarring police violence committed against West Indian residents in London. What separates the two films, besides the 15 or so years between their timelines, is the depiction of the communities their protagonists inhabit. “Small Axe” begins with a supportive base surrounding the hero, and ends with a hero who must stand alone. That the lead character here is a cop may explain this shift, but the resulting story is more complex than that.

“I am the only authority you need,” says Kenneth Logan (Steve Toussaint) to his school-aged son, Leroy (Nathan Vidal) after he saves him from harassment by the local police. According to the bobbies, the younger Logan fit the description of a criminal committing robberies in the area. If this is true, the described criminal is quite lousy at being inconspicuous: Leroy is dressed in an English school uniform and carrying a musical instrument. But any minority who has ever been in this situation knows that “fitting the description” is pure bullshit, a means to harass with impunity. Kenneth’s angry response to the cops is jolting, but not as jarring as the question that precedes it. He asks if the cops found anything on his son. It’s a sarcastic question, to be sure, but a jarring one nonetheless.

When Leroy’s innocence is established, Kenneth guides him to the family car where he dispenses that lecture on authority. It sounds a bit like “the talk” all Black kids get. “When they stop you, don’t be no roughneck,” he advises. “And don’t bring no police to my yard!” The Logans expect their boy to be smart, to go to college and to avoid hanging with the riff-raff who populate their neighborhood. Supposedly, that will protect him, though there’s no delusion that this is a definite. Kenneth is a proud man, a stern and forceful father, traits his son will inherit and inhabit. Leroy will eventually bring a policeman to his father’s yard, though not in the way Kenneth expects.

Fast-forward to a forensics lab, where the adult Leroy (John Boyega) looks at a specimen while Al Green fills the soundtrack. He’s a married man whose wife, Gretl (Antonia Thomas) is expecting. They’ve finally moved out of his parents’ house and into a place of their own. Though successful as a technician, Leroy has other ambitions. He’s considering joining the police force, but he’s not convinced he should even submit an application. There are no Black police officers, though his “auntie” Jesse (Nadine Marshall) is a liaison for the Met. “She works with the beast,” says Jesse’s son, Leee (Tyrone Huntley) when he hears of his best mate’s law enforcement plans. “Not for the beast!” Leee has found his own career touring as part of the British soul group Imagination (whose song “Illusion” is an 80’s classic), and Leroy has some of the same desire to get out in front of people, to prove himself and be seen.

Leroy’s decision to sign up for the force is made after Kenneth is brutally beaten by officers looking for trouble. McQueen and his series cinematographer Shabier Kirchner set this scene up with an unbearable tension. We see the cop car pulling up to Kenneth’s parked truck in the background as he orders food from a stand. Returning to his vehicle, he rightly asks why he’s being ticketed for blocking the highway when he’s clearly not in the way. To prove his point, Kenneth pulls a tape measurer to show he’s within the legal limit for space. But knowing your rights is the easiest way to get a more vicious beatdown. The camera ducks under the truck as the violence occurs in front of several witnesses. We only hear most of the blows, which makes the scene even more terrifying. Kenneth’s horrific, gory face awaits Leroy when he arrives at the hospital.

Like “Mangrove,” police brutality leads to a court case. But instead of focusing on the defendants or the case, “Red, White and Blue” entrenches us with the cops. Leroy’s decision sends his father into a tailspin of fury. “You have a pH.D!” he yells. Leroy argues that he wants to change the system from within, and this is how he can do it. Naturally, his father does not understand, which causes a massive amount of friction. Leroy also has a lack of understanding; he has no clue just how difficult his task will be. Being the first minority in anything is always accompanied by baggage too heavy for mere mortals to carry.

McQueen and his co-screenwriter Courttia Newland (who also co-wrote “Lovers Rock”) make the viewer question and suffer along with Leroy. Joining the force feels like a deal with the Devil in more ways than one. The community, including teens at the community club that once nurtured Leroy in his youth, see him as a traitor. He’s used in marketing ads as an insincere prop for diversity hiring. His father is so consumed with rage that he cannot accept his son’s career choice. (Toussaint does an excellent job balancing love and rage.) And despite exceling in every element of the training, the majority of his White counterparts have no intention of seeing him as a real cop. Racial slurs are written on his locker and comments are made while he is within earshot.

Like his father, Leroy never suffers these fools gladly, even when they predictably abandon his calls for backup. Kirchner’s camera whizzes along during the exciting sequence where Leroy singlehandedly takes down a violent perpetrator, then continues to buzz with adrenaline when he confronts the cops who never showed up. This was revenge for an earlier altercation where Leroy spoke out during an incident of prisoner mistreatment. As in “Mangrove,” McQueen gives us a scene shot through a slot in a jail door, except this time the main character is on the free side of the door. “You traitor!” yells the beaten man, violently lunging at the camera. In here, Pc Logan is a man without a country.

“Red, White and Blue” got under my skin in ways I was not expecting. McQueen uses the police procedural format to interrogate what it’s like to be the only Black person in a hostile and racist job environment. Then the film asks if it’s worth the aggravation involved in hopelessly trying to force change onto an immutable system that doesn’t see your worth. There are no heroics presented here; Boyega’s excellent portrayal is painfully human at all times, forcing you to wonder if his desperate urge to foster change is a futile endeavor. When the only other policeman of color quits after rampant abuse, the question arises of which is the bigger Pyrrhic victory: Do you allow your soul to be destroyed while hoping for one millimeter of moment in the right direction, or do you save yourself by escaping the toxicity purposely designed to make you quit?

McQueen provides no answers here. This is a not a coddling film. It’s an angry one, a tricky meditation that forces you to put yourself in the shoes of someone you might actually consider a traitor or a fool. Boyega, who is fantastic, wears the burden of Leroy’s loneliness very well, and you feel his desire for an ally, a friend or, most notably, a running buddy who looks like him. There’s a scene early in the film where, upon arriving at the training dorms, he hears Marvin Gaye’s “Got to Give It Up” blasting from another dorm room. Knowing he’s supposed to be the only Black man in training, Leroy assumes he’s mistaken. You can feel Boyega’s mind racing with this thought. Watch his body language when Greg (Liam Garrigan), a White man answers the door. Even though the two become friends, there’s a hint of disappointment in Leroy’s realization that this integration battle will be fought alone.

Speaking of soul singers like Gaye, Al Green is all over this film’s soundtrack, leading us away from the other films’ use of reggae and lovers rock. The right Reverend’s love songs are used in clever ways, none of which are predictable. “Red, White and Blue” uses Green’s cover of “How Can You Mend a Broken Heart?” as memorably as “Lovers Rock” used “Silly Games,” and the film ends with his incredible cover of “For the Good Times.” There are also some 80’s tunes by Imagination and other groups, which place this film’s setting in the early 80’s. Even Billy Joel’s ode to Christie Brinkley, “Uptown Girl” shows up in a scene that will make you forget any happy feelings you may have unfortunately had for that song.

“Big change, it is a slow turning wheel,” Kenneth tells his son in the closing scene, before the two toast “to something good.” Technically, this is the last line in “Small Axe,” a choice that I couldn’t stop ruminating on after seeing 60% of the series. I am sure I’ll return to my thoughts after seeing the other two installments. For the characters in “Red, White and Blue,” those words have some hope, as they have no idea that the situations they wanted to impact haven’t really changed much today. The system may be more integrated, but it’s still just as corrupt and destructive as Leroy found it. The wheel of change is slow, but I guess there’s a small comfort in knowing it’s still turning.

This review was filed in conjunction with the New York Film Festival premiere on October 4th. It is now available on Amazon Prime. 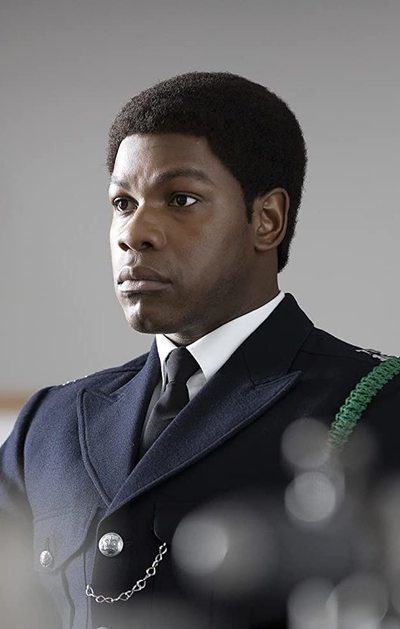