With its innovative design (including panels that would grow and shrink to help convey a genuine sense of proportion to readers), bold use of color, and trippy storylines, Little Nemo in Slumberland was a comic strip like no other when it debuted in the New York Herald in 1905. Those audacious elements would lead to its creator, Winsor McCay, to be dubbed “the first original genius of the comic strip medium” by historian R.C. Harvey and cited as an influence by the likes of R. Crumb, Art Spiegelman, and Federico Fellini. McCay would also prove to be a leader in the early days of animated film as well and, in fact, his first movie, “Winsor McCay, the Famous Cartoonist of the N.Y. Herald and His Moving Comics,” was a live-action/animation hybrid that depicted him producing 4,000 drawings of Nemo, a young boy whose adventures in the world of dreams were the subject of the strip, that were then brought to life in a four-minute animated segment. (This film can be found online and is kind of charming, although his use of ethnic stereotyping, especially in the case of one of Nemo’s pals, African Impie, is troubling to witness today, even if it was par for the course back when it was created.)

This would not prove to be the only attempt to bring the adventures of Little Nemo to the big screen. In 1984, there was an expensive European version entitled “Dream One” that was co-produced by John Boorman, featured a cast that included the likes of Harvey Keitel, Nipsey Russell, Carole Bouquet, and Michel Blanc, and was, by most accounts, somewhat of a disaster. A few years later, the Japanese-American animated co-production “Little Nemo: Adventures in Slumberland” came out and was also a failure, though it was at least an occasionally interesting one. Frankly, the one film that has come the closest to capturing McCay’s blend of strikingly hallucinatory imagery and ambitious storytelling to date is the Terry Gilliam classic “Time Bandits,” right down to McCay’s willingness to deal with darker themes within his wild narratives.

A new cinematic take on McCay’s creation has now arrived in the form of Francis Lawrence's “Slumberland” and while it's a film few will actually like, your reasons for disliking it will presumably vary with your knowledge of the source material. If you're familiar with McCay and his place in comics history, the film is a profound betrayal of his work that takes a startlingly unique creation and renders it into the kind of utterly forgettable sludge. Those who have never heard of the likes of Nemo or McCay will instead look at it as just another bland fantasy epic that spends tens of millions of dollars but somehow fails to come up with a single memorable image in return.

This time around, Nemo (Marlow Barkley) is a nine-year-old girl living in an isolated lighthouse with her father (Kyle Chandler), who regales her nightly with elaborate bedtime stories involving fabulous treasures, dangerous creatures, and his faithful companion, a rogue known as Flip. When her father dies at sea, Nemo is sent to live with his estranged brother, Philip (Chris O’Dowd), a city-dwelling dullard who sells doorknobs for a living and has no idea of how to communicate with any child, let alone a grieving one.

This leaves Nemo turning to the world of her dreams as a way of coping with her loss and perhaps even getting a chance to see her father once again. While there, she happens upon the actual Flip (Jason Momoa), a smugly incompetent thief looking for a map belonging to her dad that will allow him to traverse throughout Slumberland, hopping from one person’s dream to the next. Nemo finds the map and uses it to force Flip to help her track down her father. The two bound from one dream to the next—minus occasional returns to the real world and Uncle Philip, who is so boring he claims to never dream himself—while being relentlessly pursued by Agent Green (Weruche Opia), a representative of the bureaucracy that governs the dream world and is determined to crack down on the likes of Flip. The two are also pursued by a massive shadowy nightmare determined to engulf Nemo for good.

A lot of money has clearly gone into producing “Slumberland” but there is a precious shortage of imagination on display throughout. In films like “Constantine” and the last three entries in the “Hunger Games” saga, director Francis Lawrence has proven himself to be a decent enough craftsman but he lacks the kind of wild imagination needed for something like this—he presents an elaborate visual tableau (including a recreation of one of McCay’s most famous images, a giant walking bed) that never connects in any meaningful or memorable way. (Woe to those who play that “Framed” game if "Slumberland" ever gets used as one of its subjects.)

The screenplay by David Guion and Michael Handelman at least initially tries to grapple with examining the use of dreams as a way for a child to cope with unimaginable grief. But that idea is quickly set aside for a series of endless chases, explosions, and moments seemingly cribbed from other popular fantasy films from the last couple of decades. Although Barkley is okay as Nemo, especially in some of her trickier scenes with O’Dowd, the usually reliable Momoa is a real disappointment. His obnoxiously flailing turn seems to have been designed to do for him what “Pirates of the Caribbean” did for Johnny Depp, but ends up more like “Mortdecai.”

In the end, the biggest problem with “Slumberland” is its utter innocuousness. Because it is bright, noisy, and things are constantly happening, little kids might like it as a momentary distraction—but it certainly won’t inspire them to check out McCay’s original work for themselves. That's a shame because, despite the aforementioned ethnic stereotyping, those comics display the kind of rich and detailed vision that inspires people to want to become artists themselves. By comparison, it's doubtful that most viewers will retain anything about "Slumberland" the day after they see it. 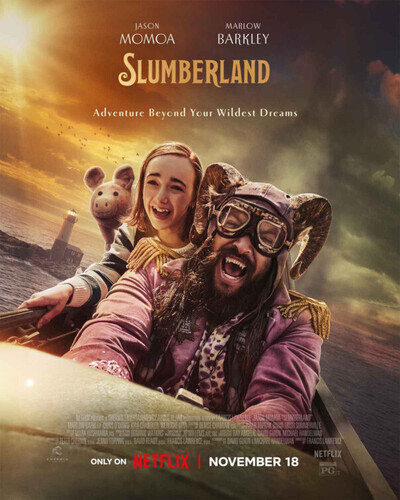 Jason Momoa as Flip the Creature