Social media corrupts and degrades everyone around it in “Slayers,” a hammy and uninspired vampire comedy that pits brain-dead social media influencers against a pack of wily and ancient bloodsuckers. In this case, a family of horned-up vamps, led by mysterious benefactor Steven Rektor (Adam Ambruso), seduce a group of internet-famous celebrities, in order to steal those starry-eyed kids’ audience for themselves. Thomas Jane, playing the cranky vampire slayer Eliot Jones, protects our immature heroes and provides some vinegary comic relief as well as a ton of knowing, button-mashing expository dialogue. Jane’s cranky and aimless explanations also leave viewers to ponder who exactly “Slayers” was made for.

“Slayers” is more of a scattershot airing of grievances than a horror-themed media spoof. If it were an op/ed, it would be so poorly edited that one would have to decide for themselves if its amateurish qualities resulted from incidental neglect or hateful abandonment. It’s genuinely hard to know at a glance, which makes watching “Slayers” even more depressing than a quick hate-skim that, on a good day, you’d know wasn’t worth a click.

Director K. Asher Levin (“Cougars Inc.”) and his co-writer Zack Imbrogno seem to know that the braindead Stream Team, led by star-struck Jack (Jack Donnelly) and callow Jules (Abigail Breslin), are relatively harmless when compared to Rektor and his thirsty vampire family, including his son Harry (CG Lewis) and Beverly (Malin Akerman), his wife. Levin and Imbrogno also don’t seem to know how to make Eliot as funny or entertaining as he is smug and self-conscious.

Jane’s character slavishly grumbles and tsk-tsks at Jack and his group (“f**kin’ kids”) because they lack survival skills, which, in the loaded context of a formulaic horror movie, makes them seem very stupid. Of course, David is taken in by Rektor and his obviously rancid sales pitch, which includes a larger platform—“Why be a part of the conversation when you can construct the conversation itself?”—and a ton of money. Ditto for Jules, who’s preyed upon by Spektor’s creepy son Harry (CG Lewis), who baits Jules with his six-pack abs and a hefty charitable contribution to her charity of choice. Only pouty pro-gamer Flynn (Kara Hayward) resists, being more attracted to Eliot and his whiny warnings.

And yet, Eliot’s charmless personality and threadbare backstory don’t really warrant much attention. In a pseudo-tragic flashback, which Eliot describes as his “origin story,” we see that his daughter Molly (Julia Sandstrom), an aspiring bassist, was murdered by Rektor, who lured both Molly and her incautious friend Alexx (Emmy James) to his hotel room by promising to listen to their band’s demo tape.

Soon, Eliot tells us that Rektor was also the producer of a cornball vigilante-style reality TV show that he used to host (and that Flynn used to obsess over). That show seems to be as chintzy and unserious as the Stream Team’s sugary videos. And when Rektor kills Alexx and Molly, a video-game style kill counter appears and gives the vampires a two-point advantage over the humans. Some parts of this scenario are meant to be funny while others are just sad.

Unfortunately, the human protagonists in “Slayers” are not as united by their, uh, humanity as this throwaway gag suggests. Jane grumbles and jeers at the Stream Team every step of the way, and his commentary is as scathing as a Fisher Price butter knife (“Lesson learned: never accept a date from a dude with a man-bun”). Eliot’s the only one who seems to know who the vampires are, but his animated history lesson montages are a cocaine-rush of conspiracy theory signifiers, so they don’t even make a superficial kind of sense. Apparently, it’s not the Jews, the Muslims, or whichever other group that real media-poisoned conspiracy theorists daydream about, but rather D.B. Cooper, Bram Stoker, and the “Vampire Illuminati” who comprise “shadow governments” that are “makin’ up laws that we don’t even know about.” That might be funny if Rektor’s action didn’t essentially confirm Eliot’s theories.

“Slayers” might have also been more amusing if its action scenes had more character, dramatic flair, or sheer grossout appeal. They don’t, so we’re stuck getting hectored by Eliot, who often sounds like a half-asleep cosplayer who’s stuck partway between old man Nick Nolte and old man Snake Plissken. David and Jules’ youthful hijinks certainly don’t help since Levin and Imbrogno often treat their younger characters like human punching bags, like when Jack murmurs that “algorithms are my kind of jam,” or when Jules accepts a syringe full of vampire blood, thinking it’s Botox. There are smarmy jokes about “bio-dynamic wine” and Fyre Festival, the latter of which Eliot attended for some reason. There’s also chiptune-style electronic music on the soundtrack that’s occasionally punctuated by airhorn honks and EDM-style bass drops. I’d turn back if I were you. 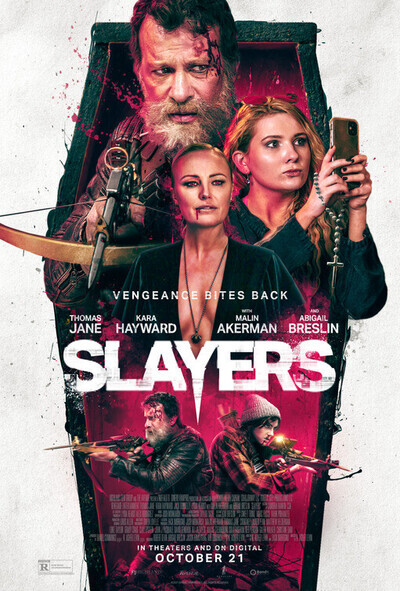 Rated R for bloody violence, and language throughout.