Supernatural domestic abuse drama "Sinister 2" is an ungainly combination of two different narratives. Neither story is, independent of the other, particularly imaginative. But when seen as extensions of each other, both the film's demonic possession/ghost story main narrative and its tragic domestic drama subplot are eccentric enough to make you wish they were much better. Director Ciaran Foy ("Citadel") and co-writers Scott Derrickson and C. Robert Cargill take on more than most horror films do, but fail to bring anything novel or thoughtful to a story about the cyclical/inherited nature of victim/bully roles. The film's creators have the right ideas, in that sense, but no clue as to how to develop them, making the film's formulaic characterizations, and cheap jump scares that much more frustrating. "Sinister 2" is so close to being a good movie that everything bad about it seems ten times worse.

Courtney and her kids' story is easily the better half of "Sinister 2" since it's most recognizably about human protagonists. Ransone's character cozies up to Courtney while Dylan and Zach, formerly a tightly-knit pair, become divided after Dylan starts making late-night visits to their new home's basement, where he and a group of kiddy ghosts watch snuff films starring the kids' families. Courtney has, in her haste to flee her abusive ex-husband Clint (Lea Coco), inadvertently settled herself and her two boys into an abandoned farmhouse haunted by Bughuul's victims. But when Dylan isn't reluctantly trying to rid himself of mysterious nightmares by watching his life-challenged friends' die in home-made super 8mm documantaries, he's fulfilling a role that not many children get to try out in horror films: pint-sized survivor. Here's the part of "Sinister 2" that the film should, but doesn't, hone in on: childhood anxieties of being abused by an uncaring father, and unwittingly neglected by a smart but hardly omniscient mother.

Derrickson and Cargill tentatively develop that last angle. Dylan even explicitly blames Courtney for doing nothing to stop Clint. But for the most part, "Sinister 2" is Bughuul's show. Which is a shame since Bughuul doesn't seem like an extension, or a thoughtful compliment to Dylan and Zach and Courtney's familial struggles. Bughuul, a fright-mask-and-tuxedo-wearing demon better known as "The Boogeyman," gets children to kill their own families, and film their murder sprees. Then he abducts the kids he just tricked into becoming murderers.

At first, that anti-familial impulse looks like an intriguing commentary on the nature of passively receiving vs. actively creating violent art: Dylan and Zach are not phased by horror movies, but if they make one of Bughuul's snuff films, they are literally transported inside their film, thereby becoming one of Bughuul's victims. This is, as a stereotypically nervous egghead scientist explains to Ransone's character, an "aesthetic appreciation of violence," one of many ways Bughuul's victims ostensibly pay tribute to him.

But eventually, it becomes clear that there is no clear connection between snuff films/voyeurism and domestic abuse/post-divorce survivor's guilt. For this reason, everything unimaginative and rote about the film feels like a personal affront. Scenes where Bughuul pops up everywhere—On a laptop monitor! In a barnyard hallway! In a bedroom closet! In an old CB radio!—get tiresome fast since they're a superficial and monotonous way to jolt viewers out of their chairs. And gruesome, super-granulated scenes of violence, including images of families being burnt alive on crucifixes, and devoured by hungry rats, are graphic, but never really disturbing since they all suffer from Clive Barker-itis: tense, effective build-up leading to a juvenile and unimaginative climax.

There are also several scenes where Ransone's character says something that's supposed to be funny, but the line he delivers feels more like a place-holder line that was never filled in with an actual joke, like when he rambles to the above-mentioned priest about never knowingly taking confession or any other kind of sacrament from the church. Likewise, Ransone's battery of facial tics, including pursed lips and furrowed brow, seem to be even more annoying since they appear to be compensating for his character's lack of definition. But again, Ransone's performance isn't really terrible since the material he has to work with is victimizing him just as surely as Clint victimized his sons. "Sinister 2" may be ambitious, but its best ideas are, as they're expressed, dumb, unmoving, and repetitive. 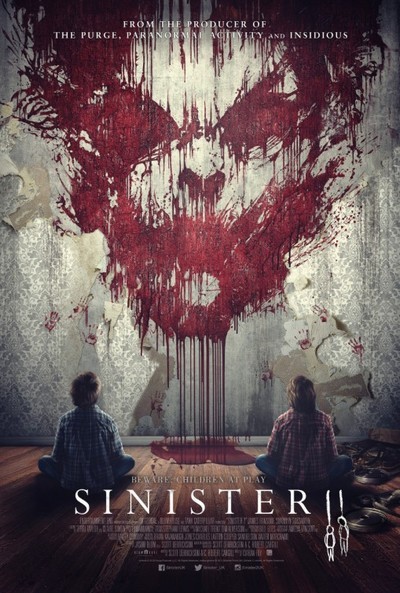 James Ransone as So & So