This is one of those well-meaning pictures apt to make certain viewers grind their teeth. I’m sorry to report that I am one such viewer. Directed by Marshall Burnette from his own story, fleshed out into a screenplay by Jason Williamson, “Silo” begins with some sumptuous shots of sunrise in the American heartland (and no, there’s no “Nomadland” influence at work here—the movie was wrapped by 2019) and some poignant voiceover, about how daddy used to say “we work in acres, not hours,” and how daddy used to “go get on some tractor” and work till he couldn’t work no more and how somehow the speaker knew “this meant something” and now he wonders how it all could “go south so quickly.”

Soon we put together that the speaker is known to all as Junior, and he’s played by lowkey Jason Sudeikis doppelgänger Jim Parrack, and that his daddy has gone south with Alzheimer’s. Meanwhile, local nurse Valerie (Jill Paice) doesn’t know how to communicate with her teen son Cody (Jack DiFalco) who’s recording shouty speed metal anthems in his bedroom when he’s not working at the grain company that Junior now runs. Cody’s asthma makes laying down the vocals for his oeuvre a bit of a challenge. He’s also got, as you may have inferred by now, a bit of an attitude.

“He’s a good kid,” Junior says to Valerie when she drops him off at work. He also asks Valerie about how to handle his dad. “Next time he goes into the past, let him stay there,” she advises.

This proves to be a ruinous recommendation. Because when Junior’s not looking, his dad goes out wandering the grounds, and eventually presses a button that starts agitating a corn silo—while Cody and an older worker are standing waist deep in that corn. The older guy, who previously had been dispensing wisdom McNuggets like “The difference between the old and that young is that the youngs still think they got a choice in life,” gets sucked down right quick, while Cody manages to stay above the fray so to speak. Because OF COURSE it’s the asthmatic kid whose inhaler is in a pocket that he can no longer reach who gets stuck in the silo.

And so it’s time for the surrounding towns to pull together (the movie was shot in Iowa) and for the smallness of the rural burb to make itself felt. The fireman with the best handle on the situation, Frank (played by “House of Cards” vet Jeremy Holm) is of course someone Valerie despises because of his involvement in the death of her husband, Cody’s dad.

While we wait for the necessary rescue equipment to show up, we get monologues: Valerie unloads on Junior, Frank makes pained confessions to a panting Cody, and so on. It all comes to a head when Valerie exclaims “I don’t care about ... any of your protocol ... let him bring my son back to me!” Because of course she does. And in the aftermath, Junior himself picks up the monologue that was begun in voiceover at the movie’s outset.

The shooting is picturesque, the acting overbaked. Before the final credits, we are informed: “Since 1964 there have been over 1,270 grain entrapments reported in the U.S.” This is followed by a statistic on how many of them end in fatality. This is meant to be informative to a general audience of course but also functions to make those who gritted their teeth through the movie feel bad. It’s very effective in that respect. 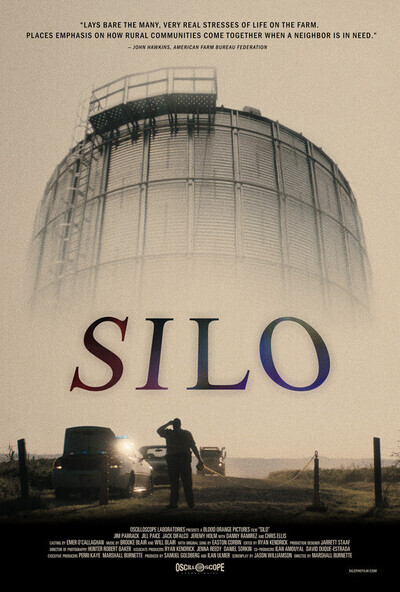