Fern (Frances McDormand) is grieving a life that’s been ripped away from her. It seems like she was relatively happy in Empire, Nevada, one of those many American small towns built around industry. When the gypsum plant there closed, the town of Empire quite literally closed with it. In six months, its entire zip code was eliminated. In this nightmare state, Fern’s husband died, leaving her completely alone and, well, she likes the word “houseless” more than “homeless.” Hitting the road in search of work as a seasonal employee at an Amazon center, Fern starts living in her van, eventually getting involved with a group of modern nomads, people who sometimes form makeshift communities, but she inevitably ends up alone again, traversing the American landscape. Fern is the unforgettable center of Chloé Zhao’s masterful “Nomadland,” a movie that finds poetry in the story of a seemingly average woman. It is a gorgeous film that’s alternately dreamlike in the way it captures the beauty of this country and grounded in its story about the kind of person we don’t usually see in movies. I love everything about it.

Filmmakers and artists in general have a tendency to judge their characters. Here’s the good guy, here’s the bad guy. Here’s the problem that needs to be solved for the leading man or lady to be happy by the end of the movie or damned because of their bad behavior. There’s a much lesser version of the true story of “Nomadland,” based on the book by Jessica Bruder, that does all of this, melodramatizing Fern’s story into one of redemption. Fern doesn’t think she needs to be redeemed or saved, and Zhao doesn’t push buttons in an attempt to make us feel sorry for her either, while also somehow never underestimating the loneliness and sadness of her situation. The result is a film that earns its emotions, which come from genuine, honest empathy more than anything else.

Of course, this is impossible with a lesser actress than Frances McDormand anchoring every single scene. We see this world through McDormand’s performance, one of the most subtle and refined of her career. Fern is such a stunningly complex woman, someone who can be restless to a degree that feels self-sabotaging but is also incredibly warm and open with her people. She makes friends everywhere she goes, like the ladies she goes to an RV show with, or the young man she gives a light to. McDormand does so much with a glance or a wry smile that other actors couldn’t convey with an entire monologue. We see a whole life in this performance. Every beat and every choice has history behind it. It’s one of the best career performances from one of our best actresses. It’s just breathtaking.

And Zhao matches what she’s getting from McDormand in “Nomadland” with her stunning technical prowess. She reunites with Joshua James Richards, the cinematographer on “The Rider,” and the pair again find beauty in the landscapes of the country. Fern’s journey takes her all across the United States and Zhao and Richards lean into the majesty of the world around her with long shots of the horizon, most of them seemingly shot at the magic hour. It’s a beautiful film just to experience, and it’s not just in “beauty shots.” Everything about the visual language of "Nomadland" is striking—just the way Richards and Zhao slowly glide their camera with Fern through a community of van-dwellers can feel lyrical while somehow never losing the truth and grit of the moment either. It’s honestly hard to figure out how Zhao has made a film that’s this beautiful in its compositions and somehow still feels like it has dirt under its fingernails. A moving score by Ludovico Einaudi that’s easily my favorite of the year adds to the poetry of it all.

Most of the people that Fern meets along the way in “Nomadland” are non-actors, people who live this life on the road. (The only other familiar face belongs to David Strathairn, perfect as a man who Fern befriends.) There’s an improvised, natural quality to Fern’s conversations and interactions that grounds the film. These modern nomads tell stories of not wanting to die with their dreams of traveling the country unfilled, share tips on how to live life safely on the road, and support each other in ways that neighbors with traditional homes rarely do. “Nomadland” becomes more than just a fictional account of a fascinating woman as it also reminds us how many people are out there with stories to tell and dreams going unfulfilled. And yet it never wallows in grief or misery.

Of course, grief is always there, hitching a ride. It can be in the way McDormand smiles when she hears someone else speak of their lost loved one. She’s probably thinking of her husband. And there’s an interpretation of “Nomadland” that it’s the story of a woman running from grief, unmoored from society after everything she knew up and vanished. Part of that is true. But it is also the story of so many Americans who feel lost nowadays, unsure of where to go next or what tomorrow will bring. The images of “Nomadland” that feel like answers to the unrest and anxiety of 2020 are the ones that contain so much beauty about the simplest things—the smile of a friend, a dip in a river, a kind gesture of a stranger. We may not all be able to relate directly to the struggles of Fern, but we can all feel that sense of unease and uncertainty. Maybe we should hit the road.

This review was filed in conjunction with the premiere at the Toronto International Film Festival. It is being republished for its debut in theaters and on Hulu today, February 19th, 2021. 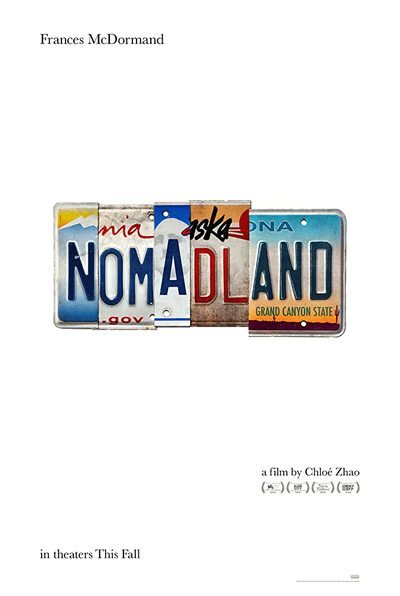 Rated R for some full nudity.