Chances are that you’ve likely seen “Shot Caller” before. Ric Roman Waugh’s tough-minded prison thriller contains enough familiar elements cherry-picked from the last two decades of pop culture that it might as well come with its own personalized checklist. White collar Everyman thrown into a gritty gangster life? Check. A beautiful family that he loves but is forced to abandon for their safety? Check. A harrowing introduction into the demoralizing routine of prison life that eventually hardens the Everyman into a real criminal? Check. Racially homogenous gangs, corrupt guards, and dedicated, no-bullshit cops? Check, check, and check. If anyone guessed there would be a dangerous deal that goes south during the film’s climax, then congratulations. You’ve won a set of steak knives.

But despite its unabashed fondness for clichés and tired tropes, “Shot Caller” mostly succeeds in its aims because of Waugh’s sober, matter-of-fact approach to the material. There’s an abiding sense of inevitability that runs through the film, as if all the events that occur were predestined because of systemic rot. “Shot Caller” isn’t the type of film that would use the phrase “prison-industrial complex” but that ultimately works to its advantage since its implications live in its bones. There’s a casual brutality at play that never feels grotesque in Waugh’s hands, just sadly unavoidable.

The film follows Jacob Harlon (Nikolaj Coster-Waldau, acquitting himself well), a family man sent to prison on manslaughter charges after a fatal traffic accident that left his best friend (Max Greenfield) dead. As one can reasonably surmise, he quickly falls into a white supremacist prison gang initially for survival but he soon becomes acclimated to the lifestyle (or does he?). He shuts out his wife (Lake Bell, who deserves better than these thankless roles) and his son (Jonathon McClendon) after receiving a longer sentence when he’s identified during a prison riot. After ten years, he’s finally released, under the watchful eye of his parole officer Kutcher (Omari Hardwick), but he’s almost immediately thrown back into the criminal world. Waugh makes it abundantly clear that it’s Jacob who must now determine his own fate.

In case it wasn’t obvious, Jacob does determine his own fate in a defiantly self-flagellating manner. The actual narrative mechanics of “Shot Caller” are telegraphed from miles away, but Waugh’s weaknesses in screenwriting are frequently made up by his clean, functional direction. The film’s first half moves at a brisk pace, in part because Waugh and editor Michelle Tesoro maneuver between scenes, introduce new characters, and lay out different environments with restrained confidence. Though he takes plenty of shortcuts, Waugh also provides the audience with just enough information and time so that nothing and no one feels one-dimensional. Credit should also be given to the film’s supporting cast (Jon Bernthal, Emory Cohen, and Jeffrey Donovan, to name a few), all of whom do wonders with the little they’ve been given.

“Shot Caller” slides into predictable mediocrity in its second half, which amps up the violence and downplays the emotional core—Jacob’s self-immolation as penance for his actions—seemingly in a foolish bid for raw authenticity. The film might track Jacob’s own downward trajectory into ruthlessness, but it falters when it begins to embody those qualities rather than simply depicting them. Waugh also too frequently wants to have his cake and eat it too by portraying Jacob as a vicious criminal and a victim of the prison system and a good guy who somehow still retains his own morality. That’s not to say it isn’t possible to do, far from it, but neither Waugh nor Coster-Waldau are capable of capturing all of those contradictions at once. This ultimately leads to bloody, half-hearted climaxes that never once have any lasting impact whatsoever.

There are still admirable qualities to “Shot Caller,” in spite of its obvious and glaring flaws. Waugh never sentimentalizes his environments nor excuses his subjects’ behavior, and while that leads to a filmic detachment difficult to define, it’s better than imbuing the film with a false sense of humanity. He clearly cares about the verisimilitudinous quality of the prison scenes, particularly the ritualistic aspect of guards un-cuffing prisoners when they enter solitary confinement. Waugh undoubtedly paints with a broad brush to communicate ideas, but he also has an eye for detail that shouldn’t go unnoticed. Though “Shot Caller” might be the victim of unfortunate timing (it’s unclear if people want to spend their time with a fictional white supremacist prison gang in light of recent events), it’s nevertheless a decent genre entry that often disturbs by what it leaves unsaid rather than what it chooses to underline. 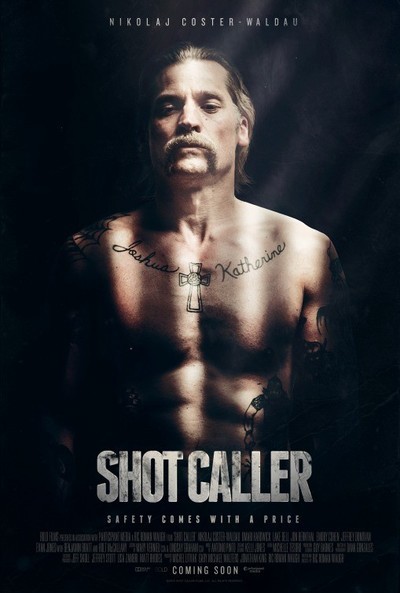