I’ve always found something morbidly fascinating about watching talented actors and actresses give their all to a project that doesn’t deserve it. I start to try to figure out if and when they knew it was a disaster. Was it during the extended “kidney theft urban legend” bit? Was it when the director asked him to play a scene in which his tights get ripped off by a Mexican woman calling herself Sarah McLachlan? Was it during the scene in which a child falsely accuses them of molestation? When did these very funny and undeniably talented TV actors know that “Search Party” was a disaster? Delayed almost two full years since its original release date and now barely released after being out on DVD in Europe for over a year, one gets the feeling that “Search Party” wouldn’t even be getting its minor release if stars T.J. Miller & Thomas Middleditch hadn’t proved such resonant comic chemistry on HBO’s “Silicon Valley” and the always funny Adam Pally hadn’t connected in films like last year’s “Night Owls” and the upcoming Sundance hit “Joshy.” Otherwise, I imagine “Search Party” would have been buried in the failed comedy cemetery in which it belongs.

One can almost see the thinking process that led to “Search Party.” Get a bunch of talented TV actors together, hire a director who has written buddy comedies (Scot Armstrong, who has a co-writing credit on “The Hangover, Part II” and a story credit on “Old School”), and why not pick up Tim Orr, the cinematographer from “Pineapple Express” for good measure? It will write itself! No, it won’t.

Nardo (Thomas Middleditch) is going to marry Tracy (Shannon Woodward of “Raising Hope”) but has a stoned conversation that leads buddy Jason (T.J. Miller) to believe that he should put a stop to the wedding despite the more reasonable Evan’s (Adam Pally) protestations. (In “Hangover” casting terms, Middleditch ends up being the wacky Zach Galifianakis, Pally is undeniably the Ed Helms, and Miller is the reckless Bradley Cooper). When Jason breaks the wedding up, Tracy goes on the honeymoon anyway, leading Nardo to try to follow her to Mexico. Before you know it, Nardo is calling Jason & Evan because he’s been carjacked, left naked in a small Mexican border town. Ignoring the advice of his co-worker Elizabeth (Alison Brie) and boss MacDonaldson (Lance Reddick), Evan gets essentially hijacked by Jason to help out the third spoke in their friendship wheel. Along the way, they run into Krysten Ritter (“Marvel’s Jessica Jones”), Jason Mantzoukas (“The League”), Jon Glaser (“Parks and Recreation”) and J.B. Smoove (“Curb Your Enthusiasm”). I’ve seen awards shows with less TV stars in the room.

And yet none of them are given anything interesting to do. Armstrong and co-writers Mike Gagerman & Andrew Waller keep throwing their protagonists into increasingly bizarre situations in the hope something will register as funny. When the film gets to an EXTENDED bit that riffs on the kidney-stealing urban legend at the end of the first act, you can just watch all potential for it to become something interesting dissipate. (This is the point that most people will change the channel on cable.) It’s the kind of script that features a grown man lying on the floor in a moment of depression and saying “I’m a dirty cum rag,” and can’t go to Mexico without using “La Bamba,” “La Cucaracha” and a man covered in cocaine—in the same scene. It eventually devolves into one of those weird, “Huh?” movies in that I never thought I’d see J.B. Smoove lick cocaine off Thomas Middleditch’s face or Jason Mantzoukas shoot an arrow into Adam Pally’s ass. But there are a lot of things here I never thought I’d see that just aren’t funny.

“Search Party” is one of those stunning failures in relation to its cast's talent. To their credit, Middleditch and Pally are asked to do a lot of physical comedy by their director—the “Silicon Valley” star spends most of the movie butt-naked (that still above either photoshopped in the shorts or it was an alternate take for airplane and network TV versions that will never happen)—and they’re always game for everything, further proving their willingness to do whatever takes to get a laugh. Miller, Ritter, Mantzoukas, Smoove, Brie—I love this cast, even if I most certainly do not love this movie. In that sense, “Search Party” pays off on my morbid fascination, proving that even if you invite a lot of talented people to the set, the result won’t work if you don’t give them a way to show why they’re considered talented. 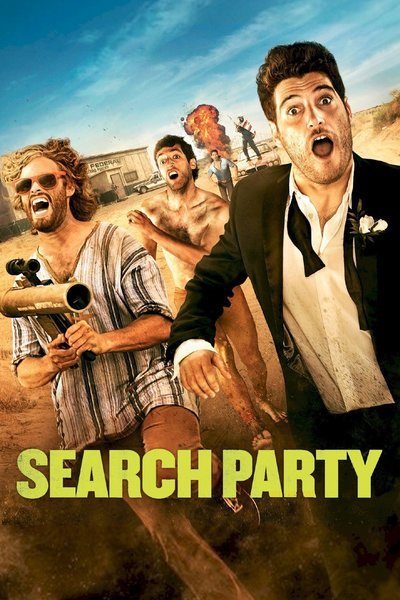 Rated R for language throughout, drug use, graphic nudity, and sexual content.

Jason Mantzoukas as The Amazing Hugo