Scenes From a Marriage

Charisma and chemistry can go very far, as evidenced by the recent viral video of “Scenes from a Marriage” stars Oscar Isaac and Jessica Chastain on the Venice Film Festival red carpet. Isaac turning those smoldering eyes on Chastain, holding her gaze, and kissing the inside of her arm? No amount of traditional marketing for “Scenes from a Marriage” could have equaled the sensuality of that moment. And the reminder it provided—that Juilliard classmates and longtime friends Isaac and Chastain are legitimately explosive together—is also the strongest asset of Hagai Levi’s adaptation of Ingmar Bergman’s iconic Swedish miniseries.

Isaac and Chastain simmer and seethe and weep and yell and kiss and weep more and yell more through every scene of this limited series’ five episodes, and the emotional rollercoaster they provide often enlivens, and then surpasses, the depth of their characters or the nuance of Levi’s writing. The divisive, passionate, and resentful layers that Isaac and Chastain add to their crumbling couple here, after the united-front alliance of their characters in J.C. Chandor’s 2014 film “A Most Violent Year,” provide a kind of meta-commentary on the passage of time, the malleability of our identities, and the impossibility of monogamy. (See also: Leonardo DiCaprio and Kate Winslet in “Titanic,” and then in “Revolutionary Road.”)

In Levi’s “Scenes from a Marriage,” the 40ish Jonathan (Isaac) and Mira (Chastain) seem happily married. After meeting at Columbia University as undergrads, they reconnected years later, dated for two or so years, and have been married for a decade. Jonathan teaches philosophy at Tufts and is the primary caregiver for their young daughter, while Mira is a tech company vice president and the family’s primary breadwinner. Their home is cozy and lived-in (production designer Kevin Thompson does a nice job with family photos, stacks of books, and a vibe that reflects parenthood rather than romance), they drink a lot of wine, and their routines are fairly set—with little time for each other.

Nevertheless, all seems well until Mira admits her unhappiness in the marriage, sparking a series of events that take place over five years. Each ensuing episode is a self-contained moment in time—months and years later communicated through changed haircuts, mentions of their daughter’s age, and professional accomplishments or disappointments. And each episode cycles through a certain setup: Jonathan and Mira fight, and Jonathan and Mira can’t keep their hands off each other. After sharing a third of their lives, the two trade the same accusations: “I’m just not totally buying it” whenever one of them declares personal growth; “Are you seeing someone?” whenever one of them requests a change to Ava’s schedule. They use similar scoffing and sardonic tones. And they touch each other affectionately (and sexually) with familiarity, knowledge, and intent, which makes an altercation that turns violent that much more startling. “I don’t know if we can be in the same room yet without hurting each other,” one of them says to the other, and that “yet” is doing a lot of work.

The original “Scenes from a Marriage,” which starred Bergman’s creative and romantic partner Liv Ullmann and Erland Josephson as a Swedish married couple agonizingly moving toward divorce over a period of 10 years, has cast a long shadow since 1973. Countless movies, TV shows, and creators have been inspired by Bergman’s work, including Richard Linklater’s “Before” trilogy, Noah Baumbach’s “Marriage Story,” and Aziz Ansari’s and Lena Waithe’s “Master of None Presents: Moments in Love,” which echoes nearly every narrative beat of “Scenes” through the lens of a Black lesbian couple. In his “Scenes from a Marriage,” Levi also mimics and mirrors the original miniseries, with the same or slightly tweaked episode titles, supporting characters who are romantically miserable (played by Corey Stoll and Nicole Beharie, who show up for only one episode and would have been welcome for more), and questions about the overlaps between progressive ideology and an institution as conservative as monogamous marriage.

Those homages are intentional—but their end results vary from predictable to underwhelming. Levi’s gender-flipped power dynamics are initially intriguing, but too often lean on a heteronormative binary or don’t dig meaningfully enough into characters’ backstories or motivations. Certain episodes drag a bit as the pair’s fights go around and around, sometimes repetitively. A fourth-wall-breaking frame is unnecessary. Like in Levi’s series “The Affair,” perspectives subtly shift throughout the five episodes of “Scenes from a Marriage,” but there is such a narrative gap between the fourth and fifth episodes that another installment probably would have been beneficial. (Anyone who watched “Moments in Love” will experience profound déjà vu during the final episode of “Scenes from a Marriage,” which is to say that either series probably could have benefited from more creativity.) And Levi’s visual storytelling, aided by cinematographer Andrij Parekh, defaults too often to trailing behind characters as they pace from room to room and up and down stairs; the observational feel and omnipresent claustrophobia are the point, but become belabored.

All of this is to say that nearly every technical aspect of “Scenes from a Marriage” is either efficient or sufficient, but rarely ascends into remarkability. That rarified air exists for Chastain and Isaac alone, who enliven the miniseries in both its quiet and loud moments. Chastain’s malleable face flickers between exhausted resignation, weary discomfort, guttural anger, and conciliatory acquiescence time and time again. During an interview scene while Jonathan and Mira discuss their marriage, during a fight with Jonathan about her plans for the future, during a conversation with a friend that ends in a surprising moment of sexual desire. Chastain’s line deliveries go from stammering to punchy and her physicality goes from closed-off to provocative, and yet her put-upon smile reveals Mira’s pervasive unsteadiness.

Isaac, meanwhile, has to be more tightly controlled as Jonathan, and he contrasts a steady and still performance with moments of physical impulsiveness: the way he whips off his glasses, his abrupt lean down to light a cigarette on a gas burner, his hand rubbing frustratedly through his hair. The actors’ contrasting energies make for some of the series’ best scenes. The uncomfortable opening in premiere episode “Innocence and Panic,” during which Levi moves the camera closer and closer to a married couple clearly on different wavelengths. A morning in “Poli” during which Mira hovers uncomfortably and Jonathan methodically packs Mira’s suitcase, with Levi following each neatly rolled or folded item that Jonathan prepares for Mira before she leaves against his wishes. The emotional whiplash of “The Vale of Tears,” in which Jonathan and Mira sprint back and forth between lust and resentment and Levi divides their house into opposing trenches. And a sex scene during “The Illiterates” that is both impressively arousing and narratively useful as Jonathan and Mira lose their composure in messy, ardent, and shameful ways. You thought that Venice moment was too much? Prepare yourself. As a whole, “Scenes from a Marriage” doesn’t always match the intensity of Chastain’s and Isaac’s performances. But when they burn white-hot, it’s difficult to look away.

Entire limited series screened for review. “Scenes from a Marriage” premieres on HBO on September 12. 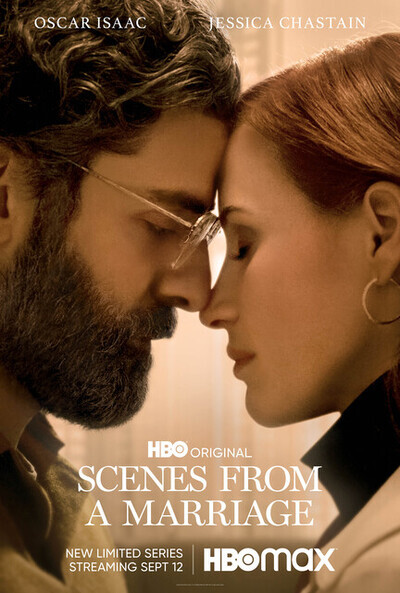