The house in “The Affair” is based on the Villa Tugendhat, a UNESCO World Heritage site in Brno, Czech Republic. So many scenes are shot there that the place should have its own above-the-title credit. As in the film, it was built in the late 1920s for a husband and wife and, according to Wikipedia, “the villa soon became an icon of modernism.” It inspired The Glass Room, the novel on which this film is based. It would have made more sense to keep the name of the book, because I have no idea exactly what affair the title alludes to; there are many and none of them is as memorable as the architecture. Full disclosure forces me to tell you I had no idea about Villa Tugendhat nor its history while watching director Julius Sevcík’s decades-spanning drama. I can also tell you my research afterwards changed nothing in this review, though it does explain why the film feels stalked by this building.

I don’t mind being forced me to figure things out while watching, but at least offer a few breadcrumbs for me to follow. Since it was shot in English, I’m assuming the filmmakers wanted to reach an audience besides their compatriots who may more easily be able to spot some of the historical allusions. They would probably be just as confused, however, by the irritating and ultimately frustrating way screenwriter Andrew Shaw hops around in time with little regard to where we are or who is who. For example, we suddenly learn one of the two main characters is married, and later, I assumed another man was one of her lovers, but it turned out he was her son who, a few scenes ago, was about eight years old. The details are so coyly distributed, if at all, that the movie feels like an adaptation of the novel’s CliffsNotes.

Even the main relationship, the one that is supposed to pull us over the bumpy parts of the narrative and make us care, is treated in such minimalist fashion that it has zero effect. Liesel (Hanna Alström) and Hana (Carice van Houten) are inseparable BFF’s whose friendship is the thread running through “The Affair.” Early on, it’s implied that the titular event is between the two of them when Hana makes a beeline for the very pregnant Liesel’s crotch. It’s not until later that we learn that Hana was politely rejected. Another scene of romantic rejection focuses less on the emotions of Hana and Liesel and more on the pretty beads that pop off a necklace and scatter all over the floor. Hana’s unrequited love is never given anything but a cursory glance, yet it’s supposed to hold the movie together.

In the opening scenes, Liesel and her new husband Viktor (Claes Bang) discuss their dream house plans with the very famous architect Rainer Von Abt (Karel Roden). Liesel says she wants "simplicity, clarity, light, a home true to the age," which sounds like the meaningless nonsense you’d hear in a “to the camera” aside on a TLC Network house building show. To his credit, Von Abt builds Landauer House based on that description. Liesel has one kid when the house is finished, and a few scenes later, there are three kids running around the grounds, including the daughter of their nanny, Kata (Alexandra Borbély).

Hana’s around too, just in time to pick up the pieces when Liesel discovers Kata’s been taking care of more than the children. The way this discovery is made foreshadows just how confusing this movie is. I was unsure if Hana knew of Kata’s affair with Viktor, or even if their driver knew of the affair. That would deliciously complicate Hana’s relationship with Liesel and add some zip to the film’s potboiler elements. Instead, Liesel repeats over and over that “we never talk about” whatever it is a film this dramatically overwrought should be shouting from the rooftops.

Sevcik and his cinematographer, Martin Strba, are so busy with the film’s look that they give short shrift to what little the actors are given to play. They’re too busy caressing that damn house or whatever space the camera happens to be in at the moment. When the actors aren’t competing with the sets or trying to find ways to mention the house, they’re getting shellacked by the obnoxious, wall-to-wall score by Antoni Lazarkiewicz and Rupert Vokmann. Sometimes, a film relies on its music to do the emotional heavy-lifting, but not here. The emotions don’t even match what we’re hearing.

How can a movie this visually glossy be so devastatingly uninteresting and dull? The characterizations are paper thin, the constant letter-reading narration is dry, and the sex scenes are anti-erotic to the point of parody. The music over one particularly fraught series of sexual encounters is so loud and overbearing that it sounds like Hana, Liesel, and their lovers are in bed with the Boston Pops. Then the movie separates the two, keeping their attraction unconsummated while they follow separate paths through WWII, Soviet rule and, I think, the present day when Landauer House becomes that museum you can visit.

Throughout her experiences, Hana feels a tie to Liesel through her old house, so much so that she enters into a loveless affair with a WWII German engineer, Stahl (Roland Møller). “I was his whore,” she writes to Liesel, and one assumes she’s doing this to buy protection for her Jewish husband, Oskar. Primarily, she’s doing it to be symbolically closer to Liesel. “The Affair” is at its worst when it uses characters like Oskar as props to bulk up the more privileged characters’ stories. We know more about Stahl than we do about Oskar; even in his death, we’re not sure if he were murdered or if he took his own life. At least van Houten gets a few good moments to play, including one where she and her infant baby hide from the German soldiers who had previously invaded her home. 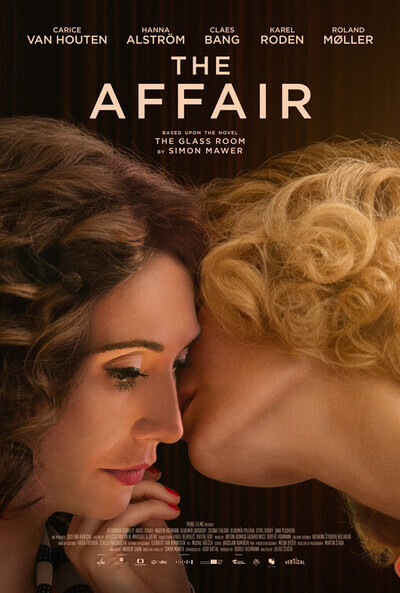 Karel Roden as Rainer von Abt

Writer (adapted from the book by)