Scary Stories to Tell in the Dark

“I’m afraid that we woke something up.”

In André Øvredal’s “Scary Stories to Tell in the Dark,” these loaded words are spoken by one of the film’s five central teens, tormented by a self-writing storybook they had carelessly taken away from a haunted house in their small town of Mill Valley, PA around Halloween of 1968. Now let’s count all the formulaic components (as well as our consequent blessings) in this vista, shall we? Group of misfit kids on a mission? Check. Period nostalgia (that's not the overdone '80s of “Stranger Things” and “IT”)? Check. Small-town Americana that delightfully rhymes with “Hill Valley”? Check. Halloween? Haunted house? Possessed object? Check check check. That’s certainly enough familiar ingredients to make a foolproof pot of genre stew. And thanks to Øvredal’s visual flair and visceral dedication to the monsters of Guillermo del Toro (among the team of writers and producers here), clearly a major influence on the “Trollhunter” director’s bittersweet approach to the field, this satisfying though far from innovative dish boasts comforting flavors throughout.

If you, like me, did not grow up with tents in backyards, overnight trips to spooky lakeside grounds or marshmallows by campfires, you might be foreign to the world of the “Scary Stories” trilogy of books; with creepy tales collected by Alvin Schwartz, and illustrations to match done by Stephen Gammell. The good news is, Øvredal’s stylishly old-school flick doesn’t require any homework—your affection for genre-work like “The Changeling,” “Ringu” and “The Night of the Living Dead” as well as a mild nostalgic appreciation for “Goonies”-type fare will suffice. Though it’s still helpful to know that these are anthology-style books. Co-scribes Dan and Kevin Hagemen (along with story crafters del Toro, Marcus Dunstan and Patrick Melton) have created a unifying (though choppy) narrative arc around a number of the popular yarns of the books—“Harold,” “The Big Toe” and “The Red Spot” among them—while keeping with the novels’ PG-13 spirit. Among the things “Scary Stories” might wake up could very well be a newfound appetite for horror in younger movie-watchers.

At the heart of the tale that celebrates the healing power of storytelling is the sweetly introverted Stella (Zoe Margaret Colletti of “Wildlife”), a motherless aspiring writer with dad issues and a love of all-things-scary—her room is decorated wall-to-wall with tales and creatures she worships. There is also the enigmatic Ramón (Michael Garza), a Mexican-American teen who attempts to pass through town, but lingers around after saving Stella’s crew from bullies one night at the drive-in. Then we have the nerdy Auggie (Gabriel Rush) in a Pierrot costume for Halloween—his outfit choice is a successful running gag—the goofy Chuck (Austin Zajur) as well as his beautiful, popular sister Ruth (Natalie Ganzhorn). When the quintet visits an out-of-bounds, boarded-up mansion with a tragic past one night and takes away a storybook belonging to the spirit of the once-murderous Sarah Bellows (Kathleen Pollard)—she is said to be locked away by her rich and cruel family—they disturb the vengeful ghost and end up disappearing one by one. Gruesome tales start to slowly appear in the book, designed in accordance with the teens’ worst fears.

Predictably, the set pieces of Øvredal’s film are a lot more fun to enjoy individually than to consider them within the context of the overarching tale. In that, the seams around the anthology show—we don’t quite connect with the kids’ individual fears in a deep sense when their nightmares find them. Thankfully however, even Øvredal seems to know the parts here are greater than the sum and doesn’t shy away from showing off the visual tricks he’s got up his sleeve to make each spine-tingling sequence pop in their own way. From the astonishing opening montage featuring Donovan's “Season of the Witch” (a new version by Lana Del Rey comes in the end) to crawling spiders and stalker-y ghouls, the bite-sized thrills of “Scary Stories” pack plenty of jolts, though more effective for adolescent eyeballs than adults.

The film also engages with the country’s political history and racism, but only to varying degrees of success. With the backdrop of a detailed production design by David Brisbin that brings the era’s character to life, we get clear shots of Nixon on posters and TV and are reminded of the Vietnam War dread—a labored ambition that doesn’t quite land. Still, “Scary Stories” is a strangely uplifting throwback to old-fashioned clans of investigative teens. While it doesn’t break any new ground, there is plenty of vintage fun to be had with kids who feel their way through life’s impending fears and live to tell the tale. 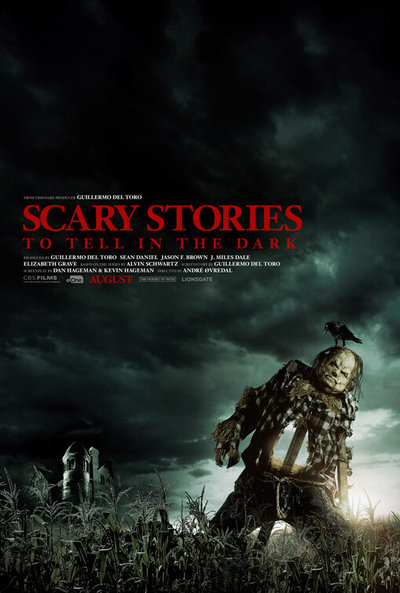