There’s been a buzz at Toronto this year about the number of high-profile projects directed by actors, including the debuts of Bradley Cooper (“A Star is Born”) and Jonah Hill (“Mid90s”), but it’s Paul Dano’s breakthrough that has been earning raves since it premiered at Sundance. Finally able to catch up with it in Canada, I can add my voice to that chorus. This is an accomplished, moving piece of filmmaking, one that cares about its characters and trusts its performers. It comes from a relatively old school of dramatic storytelling but connects emotionally because of Dano’s tender, confident work and what he’s able to draw from two of the best performers of their generation.

The Brinsons seem like an average American family. Jerry (Jake Gyllenhaal) works at a local golf course while Jeanne (Carey Mulligan) helps raise their 14-year-old son Joe (Ed Oxenbould). Joe is playing football, but mostly just to keep his dad happy, while Jeanne keeps up their new home in Montana. It’s 1960, and the world is changing, especially definitions of happiness, family, and the gender roles in a household. When Jerry loses his job, Jeanne gets one at the YMCA, and Mr. Brinson starts to drift away. We get the feeling this has happened before, that Jerry Brinson is the kind of man who doesn’t take the speedbumps of life smoothly. They just moved here after some undefined problems elsewhere, and now their life is in a state of upheaval yet again. And then Jerry decides to go fight wildfires far enough away that he basically is leaving his wife and son behind. How would you respond?

Joe longs for his father’s return, especially as he starts to see changes in his mother. She dresses and carries herself differently, and soon there’s a man (Bill Camp) on the Brinson couch who may be able to offer them what they no longer have like stability and companionship. Can you blame Jeanne for wanting them? The brilliant aspect of Dano’s adaptation of Richard Ford’s 1990 novel, co-written with Zoe Kazan, is that it avoids blame. Jeanne isn't a typical villain. “Wildlife” allows its characters to be complicated, fallible. In fact, it’s in part about that moment when we realize our parents can be selfish—sometimes you have to be in order to survive. But one never senses judgment from Dano, Kazan, Gyllenhaal, or Mulligan—they recognize that there’s beauty even in the mistakes we make in life. It’s what makes us human.

In keeping with that theme, Dano also allows his characters breathing space. More than most films, you can see Dano’s cast acting in the silent moments. What I mean is that we have a film culture, especially in America, that is so reliant on dialogue and motion, but I was struck by the amount of times I caught people in “Wildlife” listening, processing, realizing—all those silent, unflashy things that real people do all the time. Dano knows he has a mega-talented cast and so he does what a lot of actor-turned-directors do in that he lets keep the audience engaged purely through the believability of their characters.

Of course, it helps to have a cast this talented. Oxenbould is a very gifted young man and Gyllenhaal is typically great in a limited number of scenes, but the movie belongs to Mulligan, who hasn’t been this good since her Oscar-nominated work in “An Education” (and she’s been very good in between the two as well). She perfectly captures a woman placed in an impossible situation, driven to alter her behavior by a husband who essentially abandons her. She’s not lashing out, which is the typical way this story would be handled in a lesser film, but trying to figure out how to adapt. She deserves happiness. She deserves consistency. And she realizes she may have to take it, but “Wildlife” avoids all of the melodramatic pitfalls that could have so easily befallen this story.

How many times have we seen the supposed “decay of the American dream” in a way that felt more statement-making than character-driven? There’s a lot to unpack in “Wildlife” about how the world was changing in the ‘60s, particularly in its gender roles, but Dano and Kazan always make sure to keep character in the foreground instead of theme. They know that this movie only works if the Brinsons feel completely three-dimensional and relatable, and it’s that focus that elevates “Wildlife” to the position of one of the best dramas of not just this year’s Sundance or TIFF, but everything that premiered elsewhere this year too. 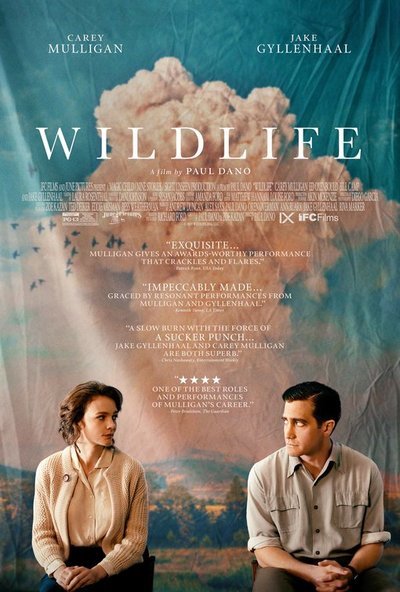