Somewhere adrift in the heart of a dystopian timeline, a young girl named Hayat (Basima Hajjar) earns the scorn of family members and neighbors. In Shahad Ameen’s feature debut “Scales,” Hayat’s remote island community is a tough place to call home. Unable to grow anything, the village must rely on the dark waters that surround them for sustenance. There’s only one problem: they’re not the only ones using that water to survive. In order to keep the peace with the mermaid creatures that surround their barren island, the fishing village mandates that each family must sacrifice a girl to placate the monsters. Instead of tossing his baby daughter into the deep, Hayat’s father, Muthanah (Yagoub Alfarhan), broke with tradition, saving his first born at the last moment from a scaly webbed hand below the surface. Twelve years later, Hayat is still paying for her father’s decisions. With less food to go around, many villagers young and old blame her for their bad luck. But Hayat is changing, both physically and emotionally, into a strong young girl who will fight for her place among them.

Written and directed by Ameen, “Scales” is a feminist coming-of-age allegory from Saudi Arabia but relatively removed from the real world. We’re plunged into this cold fantasy realm, where women are often locked away and men enjoy the privilege of fishing and living freely in steel-toned black-and-white cinematography. It is in this hostile world that our misfit pariah and hero must survive and constantly prove her worth to the people around her—people who have rejected her all her life. Although the tale is a familiar one, a young girl proves herself against old prejudices, the film’s striking imagery makes it memorable. Ameen has an eye for the dramatics, whether that’s close-ups of her actors’ faces at the right moment or a view of the rocky landscape with a sense of foreboding and awe. The world she creates with cinematographer João Ribeiro is rich in texture, shades, and visually entrancing in its austerity. It brings to mind the black-and-white version of “Mad Max: Fury Road” with its moon-like landscape drained of color and left with mostly contrasts. “Scales” also brings to mind “A Girl Walks Home Alone at Night,” using its fantastical elements in service of an allegory about a girl’s fight against a patriarchal world.

Unfortunately, Ameen’s story doesn’t come across as sharply as her visual style does. There are moments when parts of her fable feel underdeveloped or lack some sort of crucial detail. Important plot events are stated matter-of-factly but without much explanation or time to play out. In its brief runtime, “Scales” keeps its story pretty barebones after the first introductory titles lay out the village’s pact with the mermaids. The mermaids still feel like a mystery by the movie’s end, although a little more of their world is revealed. The film’s feminist allegory is a simple one, a study of extreme circumstances between genders, where one girl is allowed to break through and hopefully, lead her village towards enlightenment and away from killing their daughters. However, it doesn’t seem to have much more about to say on the matter after the first half and moves on with Hayat’s struggles.

As Hayat, Hajjar’s performance is a muted one. She’s quietly defiant, occasionally challenging authority, but for the most part, she seems beaten down by the village’s treatment of her. Every once in a while, I wanted to see more in Hajjar’s performance because there was too little of a response from her to get a sense of where the character was. In some scenes, her silence is more of a riddle than an emotion. Hajjar’s two main co-stars, Alfarhan and Ashraf Barhom, who plays leader of the fishermen Amer, are two contrasting characters in this divided world. As Hayat’s father, Alfarhan shows a rare kindness but also the limitations of love in a society that does not value girls. In opposition, Barhom displays a tougher love that gives way to a begrudging respect as he comes to see Hayat work with the men. Amer is among the harshest voices towards Hayat, telling her to do what’s right by sacrificing herself, but his character’s change of heart is a vital one, and he becomes one of her defenders.

In that sense, “Scales” is more than just about Hayat’s journey of finding her self-worth in a place that has deemed her worthless. It’s also about breaking the dismissive views of those around her. Hayat was always going to be an independent spirit, but it’s the men who undergo the biggest change, learning to accept her and potentially, saving all of their lives. While some elements of the story don’t work as well as the visual playground Ameen sets up for her characters, “Scales” is still an impressive feature debut. There’s a sense that this is just a beginning, for both its main character and its director, and there’s more to come now that they’ve broken through some of society’s biggest barriers. 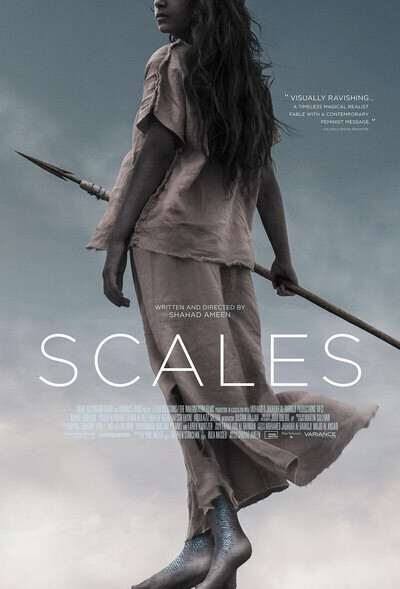