I brought a certain nostalgia to "Sample This," Dan Forrer's documentary on Michael Viner and the Incredible Bongo Band song that played a crucial role in hip-hop music. "Apache," the song in question, is instantly recognizable to any fortysomething 'hood denizen who grew up in the NYC area. If you ever went to a Party in the Park, DJ'ed a block party, spun on your back on a cardboard box, or owned a copy of "The Adventures of Grandmaster Flash on the Wheels of Steel," this 1973 classic is practically etched in your DNA.

As the percussion break section of "Apache" filled the soundtrack during the opening credits, my brain flooded with memories of days long since gone. That break, and almost every other musical element in "Apache," has been used in countless rap songs over the past 40 years. In choosing to tell this origin story, Forrer guaranteed his film a built-in audience of people like me.

Even if you lack a wealth of rap knowledge, "Sample This" is still worth seeing. Like "20 Feet from Stardom" and "Standing in the Shadows of Motown," it focuses on the studio musicians whose contributions are well-known but whose identities are not. While not as good as those two features, "Sample This" does a competent job of meting out information from studio musicians and the hip hop culture icons their work influenced. A number of surprising people show up to chat, from Rosey Grier and Jerry Butler to Gene Simmons, whose appearance in the opening scene of "Sample This" is as unexpected as the exploding robot cockroaches he sent to kill Tom Selleck in "Runaway."

Simmons's tie to the material  is explained later. As narrator, he provides an above-average take on the standard "Behind the Music"-style prose Forrer has written for him. The story of the Incredible Bongo Band plays out as a stranger than fiction game of Six Degrees of Separation; it ropes in Bobby Kennedy and Charles Manson as well as Berry Gordy, The Beatles and Phil Spector. "Sample This" begins in 1968, with its main subject Michael Viner working for Robert F. Kennedy, which connects him to former Los Angeles Ram (and cousin of Pam) Rosey Grier. Grier, who looks damned good for 81, recounts how his bodyguard duties put him in direct contact with Sirhan Sirhan the moment after Sirhan shot RFK.

Traumatized by RFK's death, both Grier and Viner left Washington D.C. Eventually, they became roommates in California. Viner went into the music business, despite having no musical talent whatsoever. "He had a guitar," his sister remembers, "and we begged him not to play it." He did have a great side hustle, and how Marcel Marceau fits into this equation is one of "Sample This'" most amusing anecdotes.

Viner's musical ties at MGM Records connected him with former Impressions singer Jerry Butler and arranger/songwriter Perry Botkin, Jr. Both appear in "Sample This," discussing Viner's schemes while pulling the movie business into the story. Butler and Viner had cameos in Grier's hilarious 1972 horror comedy "The Thing With Two Heads," and Botkin and his collaborator Barry DeVorzon composed the percussion-heavy origins of "Apache"'s sound for a climactic riot scene in Stanley Kramer's 1970 film, "R.P.M."

Viner's decision to do a soundtrack for "The Thing With Two Heads," and its lack of a full album's worth of material, led to a remake of a 60's song called "Bongo Rock." Having heard R.P.M's music, Viner called Botkin to arrange it. It was credited to The Incredible Bongo Band. Due to Viner's latest hustle, "Bongo Rock '72" became a hit in Canada, leading to a recorded-in-Canada album by the fictitious band and the song that launched a thousand samples.

Enter the studio musicians, or as Incredible Bongo Band guitarist Mike Deasy aptly states: "the people you always heard but never heard of."

"We needed a bongo player," Botkin tells us, "so I hired King Errisson." Errisson, like Bobby Hall at Motown, was a well-known studio percussionist. "He had the fastest hands I'd ever seen," one musician notes, which Errisson casually demonstrates for Forrer's camera. To accompany Errisson on drums, Botkin hired Jim Gordon, a genius session drummer who co-wrote "Layla" with Eric Clapton. The duo had worked together before, laying down the percussion break in Friends of Distinction's "Grazing in the Grass." Botkin arranged a similar break into "Apache," a song that had once been covered by the Beatles in their concerts.

Errisson and Gordon's break is the same musical contraption that Godfather of Hip Hop DJ Kool Herc noticed really got people excited on the dance floor. He searched the Bronx record store bins for albums that contained these moments. When he discovered The Incredible Bongo Band's LP (which he selected based on the album cover), Kool Herc took these sections from "Apache" and strung them together, repeating and mixing them into other records on his turntables. It caught on at parties in the Bronx, and eventually found its way into record after record. Hip hop culture was now forever connected to '60s bongo rock.

"Sample This" spends an equal amount of time with the studio musicians and the rappers who loved their work enough to infinitely use and deconstruct it. Pianist Michael Melvoin talks about 15-hour work days and playing the memorable organ section of Sinatra's "That's Life." Errisson discusses his tie to James Bond and Deasy tells a harrowing story about his time recording the music of the Manson Family. On the hip-hop side, Kool Herc, Grand Wizzard Theodore and Afrika Bambaataa discuss the art of scratching and sampling, not to mention what makes a perfect breakdancing beat. (Bambaataa's "Planet Rock" answered that for me by sampling Kraftwerk.) Footage of old hip hop parties and current performances by the studio musicians flow nicely throughout "Sample This." Everyone looks happy to be both making and consuming the music.

For a documentary filled with such joyous, danceable beats, there's still a note of sadness playing through "Sample This." It's not surprising, given this is a film bookended by deaths. Despite how adept he was at running game, Viner could only outsmart cancer so many times. Amy Winehouse, who also sampled "Apache," gets enough screen time to remind us of her tragically short life. Michael Melvoin, to whom this film is dedicated, died after filming his interviews. And Jim Gordon's story is so horrifying and tragic that it blindsides "Sample This" to a point from which the film barely recovers.

To discuss how songs like "Apache" became as much a part of hip hop as James Brown's famous musical licks, "Sample This" turns to another famous drummer. "It was the age of irony," says ?uestlove, who is fast becoming a highly entertaining interview subject in documentaries. "Not everything cool came from Detroit or Muscle Shoals. This came from Vancouver, Canada." That alone makes "Apache" the best tie-in between the Bronx and Vancouver since Jackie Chan's "Rumble in the Bronx" relocated Grouse Mountain to the Cross Bronx Expressway. 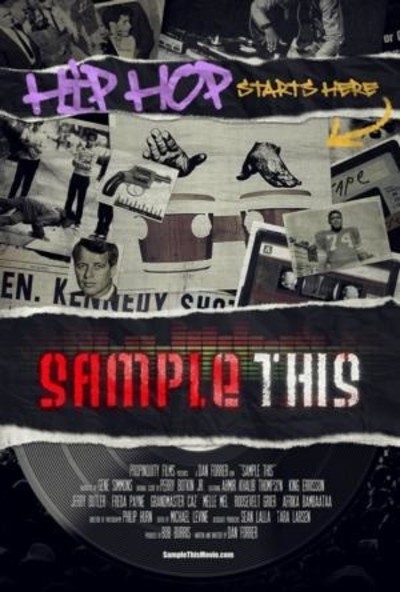 Roosevelt Grier as Himself

Melle Mel as Himself