J.D. Salinger wanted to be left alone. This is why he moved to the mountains of New Hampshire, built himself a writing bunker, and disappeared from mainstream society. The notion of him being a "recluse" was dismantled every time people in the town of Cornish saw him eating at a restaurant, or going to the post office, or doing the things we private citizens do every day. His desire for solitude was not unusual for a writer; unlike singers or actors, writers do not need a captive audience to create. He wanted his work to speak for itself, without his intervention. It wasn't as if he, like most celebrities, screamed for privacy while appearing in public dressed in an outfit made of live puppies and Brylcreem. He drew no attention to himself in public. It's safe to say Salinger meant it when he said "leave me alone."

And yet he was stalked by his fans, people who thought "The Catcher in the Rye" gave them license to harass and aggravate a man who just wanted to be left alone. Making matters worse, his most famous work was used as justification by more than one person with murder on his mind. One would think that even the hardest-hearted person might feel some guilt over that, and burrow himself deeper into self-appointed celebrity exile. But even if that were not the case, perhaps Salinger was tired of the public's constant need to discuss his only novel, and their clamoring for more of the same. After all, his philosophy was not to publish everything he wrote.

A talking head in the new documentary, "Salinger," implies that J.D. Salinger played the Howard Hughes game because it made him even more famous. It's a very cynical idea, and one of the many things in this film that made my skin crawl. Full disclosure demands that I state I was not a fan of "The Catcher in the Rye" when I read it 30 years ago, so I fail to grasp why so many people wanted to talk to its author or identified with Holden Caulfield. But I do understand and identify with Salinger's refusal to betray his solitary desires. I'm a programmer and a writer; you can't get more hermetic than that. The public thinks it is owed every personal request by those who entertain them, as evidenced by the recent Dave Chappelle flap in Connecticut. I admire Salinger for thumbing his nose at this notion.

This is why I think "Salinger" is the ultimate invasion of its subject's privacy.

The stalkerish vibe starts with its opening sequence of a photographer scoping out a post office in the hopes of getting a picture of J.D. Salinger. It then alternates between being an intolerable document of fawning fandom and a creepy parade of people who were willing to hunt Salinger down in the hopes of getting answers to their psychological issues. Their identification with Holden Caulfield is so deep that they assume his creator is omnipotent. Director Shane Salerno shows his hand early, so you immediately know what to expect during the interminable 129 minute running time. Intercut with the story of the photographer on stakeout is another talking head who proclaims that Salinger's writing was "ordained by God." Is this woman for real?

A story told late in "Salinger" highlights what bothers me so much about this film. One of the interviewed subjects tells a story of his meeting with Salinger. He waited at a crossroads outside of the author's house, and when the author appeared, engaged him in conversation. Salinger first asks "are you getting psychiatric treatment?" then in exasperation says "I'm a fiction writer. I don't have the answers to your problems. Go away!" The guy responds to this by writing Salinger a letter he intends to post on a tree outside the property. The letter explains in detail how "disappointed" the guy is: "I drove all this way and you treated me like this?" Salinger, to his credit, takes the letter.

This movie is like that guy. It's a relentless assault on a man who wished to be left alone.

Now, every documentary is in love with, or has hatred for, its subject. The good ones know how to be objective, or at least fake a sense of objectivity. Even if you love Salinger and accept him as your Personal Savior, you'll be aggravated by how Salerno clubs you over the head with this material. The music in "Salinger" is so bombastic it makes Hans Zimmer's "Inception" chords sound as dainty as "Minuet in G." The score playing over the film's big "revelations" about Salinger's upcoming released work is hilariously loud and self-important, as if these revelations hadn't been leaked on the Internet months ago. There is actual Holocaust and World War II imagery in "Salinger." It is used to give an idea of the atrocities Salinger saw during WWII, but there is so much of it that it becomes exploitative.

"Salinger" does manage to drum up a little interest during the section on Mark Chapman and the others who used "The Catcher in the Rye" as an excuse for murder. Chapman shot John Lennon on December 8, 1980. Three and a half months later, John Hinckley attempted to assassinate President Reagan. And in 1989, Robert John Bardo murdered actress Rebecca Schaeffer on her doorstep. All three cited "The Catcher in the Rye" as some form of personal philosophy. Playwright John Guare states that "if three people used something I wrote in this fashion, I'd be very troubled by it." This is an interesting point, but like the others that dilute the awe with which "Salinger" holds its subject, it is quickly forgotten.

"Salinger" tells us almost nothing we don't already know. What little that is new or revelatory is quickly dispatched in favor of playing up the subject's "mystery," and the responses of fan after fan. I doubt Salinger would have been amused by this, especially considering his own feelings about celebrity and fame, given life by his most famous character. Yet these fans all sit there glassy-eyed, talking about how much "The Catcher in the Rye" meant to them. If only Holden Caulfield could see them. I'm sure you know what he would have called them, and this movie. 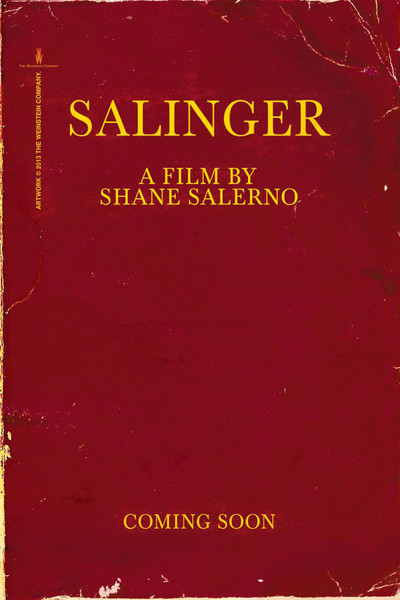 Philip Seymour Hoffman as Himself

Edward Norton as Himself

John Cusack as Himself

Tom Wolfe as Himself

Martin Sheen as Himself

Gore Vidal as Himself