The recipients of the annual Independent Spirit award for “Someone to Watch,” are, of course, usually unknown at the time of their win. But the release of 2019 winner “Socrates,” the debut feature by 29-year-old Brazilian-American filmmaker Alexandre Moratto, shows why such an award exists: it’s a work whose accomplishments signal a director of great promise.

A gritty, intimate account of a poor teenager’s struggles following the sudden death of his mother, a tale set in a city in coastal Sao Pâolo state, the film in outline can sound like many dramas delving into the hardships of marginalized people. What gives “Socrates” its special distinction are the precision and excellence exhibited in all major areas of its making, from direction, writing, editing and cinematography to the two standout performances by young actors that anchor its drama.

When we first see 15-year-old Socrates (Christian Malheiros), he’s trying to wake up his mother, and it doesn’t take too much desperate shouting and shaking her still form for him—and us—to realize that she won’t be waking up. The stricken boy barely has time to fall into grief, though, before practical matters intrude. He takes his mother’s place at her janitorial job claiming she’s having a “sick day,” but the suspicious boss doesn’t want to give him her pay. Meanwhile, the rent is past due. From being a child, the boy is suddenly immersed in a world of adult woes.

A social worker assigned to his case is sympathetic, but she reveals that his options are limited, and that being sent to an orphanage is the likeliest one. Socrates’ father, it seems, is alive but remains a distant, ominous figure until later in the story. Given his situation, it’s understandable that the boy’s search for work—and the deceptions he’s obliged to undertake—have an edge of urgency to them.

He traipses from place to place looking for jobs, but laws meant to benefit the workforce are no help to him: when one prospective employer after another asks for proof that he’s 18, he can’t supply it. Not every employer follows the law, though, but when Socrates gets a job hauling metal pipes in a junk yard, he faces an altogether different sort of challenge.

Also laboring at the site is chiseled, roughly handsome worker named Maicon (Tales Ordakji), maybe two or three years older than Socrates, and the initial interaction of the two guys comes in a scene as brilliantly staged as any I’ve seen in a film this year. It’s all a matter of fraught looks and movements and the sinuous way the camera frames them. Socrates works hard and fast, trying to prove himself, and this evidently gripes Maicon, who doesn’t need the competition. Soon enough the silent hostility erupts into fisticuffs, and the boss has to threaten them to restore order. When the two young men separate at day’s end, their apparent enmity still sizzles—but also seems to conceal something else.

The hint of sexual tension in this scene comes into the open later, when Maicon calls Socrates and offers the possibility of another job. Socrates shows up at Maicon’s place and it’s quickly apparent that the job was just a pretext. Maicon is interested in something else, yet he’s not the first one to act on that interest; when Socrates moves to kiss him, he initially draws back—as if he’s not entirely comfortable with the sexual convergence he just set in motion.

The relationship that ensues may provide Socrates a bit of solace, but it’s hardly the safe harbor he so obviously needs. And in a larger sense, being gay is another layer of complication and difficulty he must face, one that seems to have a particular importance to his murky relationship with his father, whose ultimate affront lies in commandeering his wife’s ashes.

One of the chief virtues of Moratto and Thanyá Montesso’s script is how it withholds certain information or dramatic elements until just the right moment, then unleashes them. The film is very skillfully plotted, yet that quality enmeshed in a drama that feels loose and anecdotal at the same time. The air of cultural authenticity in “Socrates” is another prime asset. The film is the first produced by Brazil’s Querô Institute, an UNICEF-backed nonprofit that uses filmmaking to help young people from low-income backgrounds; the crew was composed mainly of teenagers learning the craft of cinema while bringing their knowledge of Socrates’ world to the production.

Moratto studied at the North Carolina School of the Arts School of Film and served as an assistant to director Ramin Bahrani on the North Carolina-filmed “Goodbye Solo.” “Socrates,” on which Bahrani served as a producer, may remind viewers of the director’s early films such “Man Push Cart” and “Chop Shop.” There are also points of comparison to the work of Belgium’s Dardenne brothers in both the concern with struggling lower-class characters and a visual manner that makes eloquent use of tightly-framed handheld camerawork. Indeed, Joâo Gabriel de Queiroz’s extraordinary cinematography deserves special citation.

The performances by Melheiros and Ordakji are likewise exemplary and striking. The two may seem like naturals who were discovered in the favelas, but both come from the theater. Their starring work here, which should launch them into successful screen careers, is one of the reasons that Moratto’s very personal film, which has an edge of contemplative melancholy, ultimately is no downer: it has the energy and intrepid determination of youth. 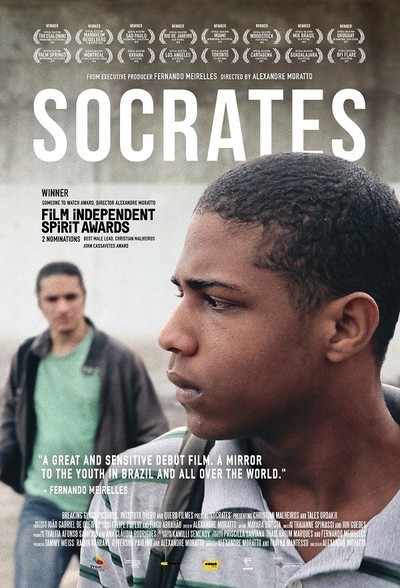