"Rules Don't Apply" is the perfect title for Warren Beatty's first film as an actor since 2001's "Town and Country," and his first as a director since 1998's "Bulworth." He gets away with more than a lot of actors with twice his box office take and ten times as many movies to his name. Now 79, Beatty is a great movie star and also a pioneering one, parlaying his clout as an actor to become a producer and director of consistently interesting films starring himself. The cream of the crop is probably 1981's "Reds," but even though he's worked at a snail's pace since the 1970s, it's hard to look over his output and think, "What a slacker."

All the work is not only meticulous and passionate but unique and often peculiar. Only a temperament as odd as Beatty's would use his final option in a multi-picture studio deal to make a film as problematic, bizarre and wonderful as "Bulworth," about a suicidally depressed Senator who re-creates himself as a rapping political philosopher. Or "Love Affair," ostensibly directed by Glenn Gordon Caron (TV's "Moonlighting") but pretty clearly a Beatty film, right down to its wordless, choppy music montages, sumptuous scenery, and glamour filters so oppressively smeary that they make Beatty look like an extraterrestrial haloed by heavenly light.

Beatty's latest is another proud entry in a strange filmography—not a movie about aviation billionaire and filmmaker Howard Hughes, exactly, although he's in it, and certainly not a Howard Hughes biopic, but a movie that just happens to have Howard Hughes in it. It's a romantic comedy starring a couple of attractive young people (played by Alden Ehrenrich and Lily Collins) who carry themselves like bland ingenues but who quickly reveal themselves as very odd ducks. And it's a historical drama about Hollywood during a period of deep change, the early 1960s, when Beatty was about the same age as Ehrenreich's character, a driver for Howard Hughes, and the major studios were beginning a decline that would ultimately allow a figure as unusual as Beatty to emerge.

Hughes, then 59 but played by a twenty-years-too-old Beatty, doesn't appear until fairly deep into the movie. Like Col. Kurtz in "Apocalypse Now," he's constantly talked about but never seen. In fact he's rarely seen by the people he employs. Like Beatty a couple of years ago, Hughes is described as a filmmaker but hasn't made a new film in ages, and he is increasingly defined by his eccentric behavior. Ehrenreich's character Frank Forbes is a driver for Beatty, shuttling a coterie of approximately 28 beautiful young women to and from various classes designed to transform them into viable movie stars for some unknown project Hughes is preparing to direct. Marla Mabrey (Lily Collins) is a wannabe-starlet who arrives in Los Angeles with her mother (Annette Bening) from a small town, moves into a spectacular apartment paid for by Hughes that overlooks the Hollywood bowl, and starts attending classes designed to make her more elegant, sophisticated and accomplished.

There's a budding love story between Marla and Frank that's complicated by their upbringing: Marla was raised Baptist and lives with her mom, who's peppy and friendly but extremely judgmental, while Frank is nearly as strict a Methodist. It's also complicated by the looming attentions of Hughes, who treats all his young starlets like members of a sheik's harem but doesn't have sex with any of them. In fact the one thing the actresses have in common with Hughes employees is that they've never met Hughes. Hughes communicates with them mainly by phone. Sometimes he calls them up out of nowhere and launches into a very long monologue or starts berating them over some breach of protocol or perceived slight. On payday he has a clipboard lowered from a window of his office while actresses stand down on the street and sign for their paychecks.

Nobody knows what kind of movie Hughes is making or what kind of talent would allow a young actress to win the lead role. And nobody dares ask Hughes for additional details. Everyone who works for Hughes speaks of him the way acolytes speak of a religious figure or cult leader—he's always "Mr. Hughes" even in conversations that occur in complete privacy. Most of the film's characters are distinguished by this mix of slightly bland innocence and eerie fervor.

Marla and Frank keep circling each other, and soon Frank is pretty clearly in love with her. As for Marla, well, it's hard to say; she's tough to read. Eventually Marla does get to meet Mr. Hughes and something like a romance begins; the extreme difference in their ages gives the affair a creepiness that's exacerbated only by Marla's startling ruthlessness (she's genuinely smitten by Hughes but also trying to gain advantage over the competition) and by Hughes' desperate, often heartbreaking loneliness. He's locked himself up inside a vault of his own devising, and it's hard to tell if his obvious mental illness was always this bad or if it was amplified by the strange dictatorial behavior that his money and success allowed him to indulge.

Shot by Beatty's regular cinematographer Caleb Deschanel and co-written by Beatty, "Rules Don't Apply" is a big production that carries itself with the nonchalance of a much smaller one. There are signature, dialogue-free Warren Beatty music montages that cut off abruptly, a soundtrack of vintage pop and swing tunes and classical cues (including a snippet of Mahler's Ninth,which you'd think would be way too heavy for a film this light) and a wild ride in Hughes's wooden airplane The Spruce Goose. The movie runs more than two hours but has about as much plot as one of those inconsequential "programmers" that used to run on the second half of a double bill in the 1930s, and the tone is at once extremely cynical (mainly about how Hollywood entices and exploits starry-eyed young people from other places) and nostalgic for the way things used to be. The cars, the skirts, the heels, the fedoras, the cigarettes and cocktails, the vintage prewar architecture (some of it recreated digitally) all bespeak a longing to go back a specific period in the industry that forged Beatty as a young man, and that his innovative work as both writer and producer (especially on 1967's "Bonnie and Clyde") would help dismantle.

The title song is performed twice, at full length, on solo piano with Marla on vocals, and the movie just sits there and lets you listen. Many scenes are so short that when Beatty cuts out of them you wonder if there's a glitch in the projection. Others go on for five to eight minutes and have the polish and shape of a scene in a play. The film meanders and dead-ends, regroups and starts over. It's a mess, but a glorious one, and it's so clearly the expression of one artist's vision, seemingly immune to studio notes, that when you find yourself wondering "Who on earth could this possibly be for?" you realize that it's a compliment. As an entertainment, "Rules Don't Apply" is iffy, but it deserves an extra half-star for audacity. Not only do they not make them like this anymore, I'm not convinced they ever did, unless Beatty was involved. After the screening I heard a fellow critic say, "I have no idea what to say about that movie." I'd like to think that if Beatty could've heard that, he would have thought, "Victory." 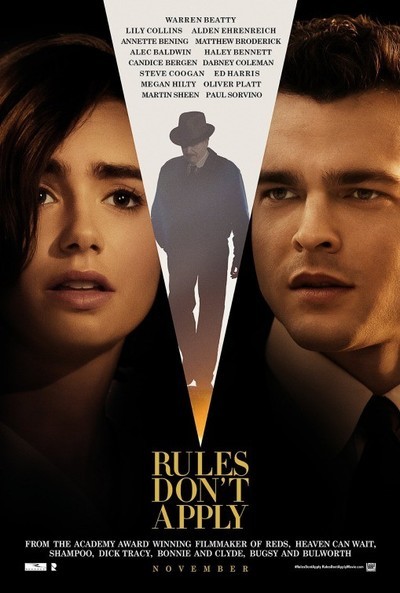