From Tom Hanks to David Chase, it seems there’s a favorite subject for established media types who turn to feature film directing: guys forming a rock band. The latest to pursue this beguiling if unoriginal path is actor William H. Macy, who turns out a winning, well-crafted musical drama in “Rudderless.”

Macy has also chosen to take up what one critic recently labeled the most overworked of current dramatic premises: people recovering from the death of a loved one. In this case, the aggrieved character is a dad who eventually calls himself Sam (Billy Crudup). We start out seeing his college-age son, Josh (Miles Hetzer), recording some demos of songs he’s written. Then there’s a shooting at the college Josh attends and suddenly the boy is dead. His father and the rest of his family, needless to say, are thunderstruck.

Two years later, Sam is living solo on a sailboat, earning money as a house painter and drinking a lot. The latter pursuit leads him to a bar that has an open mike night where locals perform their own tunes (all very creditable compositions and performances, incidentally). One night Sam has a wild idea and gets up and performs a song of Josh’s. The performance not only gets a good reaction, it also wins him a fan.

The young guy who follows him out of the bar, Quentin (Anton Yelchin), seems bowled over by what he’s just heard. He also seems like a young musician needy for various kinds of support, inspiration and creative companionship. Sam, for obvious reasons, is not an easy guy to strike up a friendship with. But Quentin keeps after him, especially regarding the quality of the songs he mysteriously harbors, and, soon enough, Sam is not only playing more, he’s also allowing his young pal to sing and play back-up.

It’s just a hop and a skip from there to forming a band with two other musicians (Ben Kweller, Ryan Dean). When the foursome, which calls itself Rudderless, takes the stage and cuts loose, the crowd’s reaction is euphoric. And well it should be: The songs (credited to Simon Steadman, Charlton Steadman and Fink) are very hooky rockers, and the band’s performance is blistering. Sam, in particular, seems reborn.

This moment comes roughly halfway into the film, and it’s too bad it’s relatively fleeting. The music is so good and the band so credible that this viewer would have enjoyed much more of both. Instead, the film (written by Casey Twenter, Jeff Robison and Macy) continues on its narrative path but grows a bit wobbly with the kinds of second-half contrivances that some indie dramas are prone to. These include plot strands concerning Sam’s relations with a local music store owner (Laurence Fishburne) and feuding with the management of the marina where his boat is docked, his evolving father-son dynamic with Quentin, and a crucial last-act revelation regarding the actual circumstances of his son’s death.

Contrived or not, the story is put across with pleasing, unpretentious conviction and skill by Macy (who has a supporting turn as the manager of the watering hole where Rudderless performs). The performances he elicits from his entire cast are very flavorful and nuanced, with the two leads proving especially impressive. Crudup, a versatile and solid performer in all circumstances, ably conveys Sam’s sorrow and guarded yearning for a new life, while Yelchin gives Quentin an edgy, skittering energy. Both actors are also extremely adept at the musical aspects of their roles.

If this directorial outing was in any sense an audition for the talented Mr. Macy, he should be congratulated on passing it. 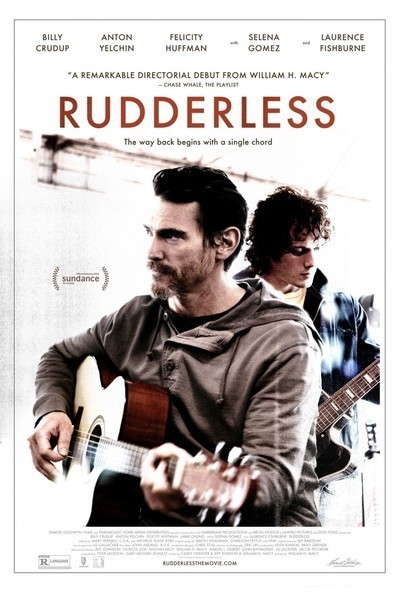