In the latest movie adaptation of Shakespeare's Romeo & Juliet, Hailee Steinfeld duly and dully mumbles this famous phrase during the balcony scene: "O, Romeo, Romeo." By the time this muddled and dumbed-down version of one of the greatest love stories ever told comes to its can't-arrive-soon-enough conclusion, some might be compelled to exclaim, "Oy! Romeo, Romeo."

Turning what should be a hanky-required tragedy into a headache-inducing travesty is no small feat. The Bard's swoony saga of star-crossed teen lovers from opposing feuding families has proved durable no matter what the treatment. The tale has managed to survive over-the-hill actors (Norma Shearer, 36, and Leslie Howard, 42, headlined the 1936 version), New York City gang members who break out in song and dance (1961's musical "West Side Story"), Leonard Whiting's bare bottom (the 1968 youth-targeted version) and even wisecracking garden statuary (2011's animated Gnomeo & Juliet).

But it becomes abundantly clear from the very first scene of a needless bout of jousting that Italian director Carlo Carlei—responsible for 1995's "Fluke," featuring Matthew Modine as a man reincarnated as a dog—is in way over his head, from several misguided casting choices to an intrusive score that sounds like Renaissance faire elevator music.

You would think, however, that Julian Fellowes, the British scribe behind "Downton Abbey" who won a screenwriting Oscar for 2001's "Gosford Park," is capable of condensing Shakespeare's work with some degree of discernment. But that he's done such a hack job of retaining the power of what famous lines are still intact is a reminder that he was also responsible for 2010's regrettable "The Tourist" and the recent subpar Titanic miniseries.

It might be easier to simply mention what isn't terrible first. Paul Giamatti as Romeo's confidant Friar Laurence and Lesley Manville as Juliet's nurse add much-needed authority and light-heartedness to their roles as go-betweens for their hormonal charges as they arrange to secretly marry. The Verona and Mantua locations are breathtaking. And at least two of the under-30 actors, Kodi Smit-McPhee as Benvolio and Christian Cooke as Mercutio, appear to have brushed up on their Shakespeare before tackling his dialogue. Fans of TV's "Homeland" might also applaud Damian Lewis' interpretation of Juliet's father, Lord Capulet, although the intensity of his line readings tends to stick out among the less-experienced and more lackadaisical actors.

Otherwise, this attempt to sell Shakespeare to the "Twilight" faithful is so ill-conceived, it makes me wish it were possible to give a retroactive Oscar to Baz Lurhmann's madly passionate South Beach gangsterland "Romeo + Juliet" from 1996.

Here are just five reasons why sitting through this more traditional version is not sweet and may bring you sorrow:

*Somebody misplaced her true grit. In 2010, Steinfeld, 16, was gutsy as heck and took no guff as Mattie Ross, the little lady who hires a drunken gunslinger to hunt down her father's killer in the 2010 remake of "True Grit" and earned a deserved supporting Academy Award nomination. Where did that girl go? Her Juliet is too young, too sweet, too passive and barely looks like she is suffering from puppy love let alone instantaneous lust for her new husband.

*Romeo should never be prettier than Juliet. It's not that Steinfeld isn't perfectly lovely in her own way, even if the costumers insist on swaddling her in gowns that look like Elizabethan bedspreads. It's that the British actor who plays Romeo, Douglas Booth, is just so obscenely male-model attractive, with his pillowy lips, jutting cheekbones and dazzling eyes—and don't the filmmakers know it, as they flaunt his beauty with an open-shirted entrance.

*The balcony scene takes a tumble. This is the movie's greatest disappointment. Really, if you can't get this right, then why even do Romeo and Juliet? Steinfeld and Booth both struggle with Shakespeare's poetic rhythms. Give them points for even remembering the lines. Meanwhile, the soundtrack with its tooting flutes and twittering violins undercuts every verse. As for the fake vine that Romeo climbs upon—in addition to the faux rose seen previously—they look as if they were plucked from a bargain bin at a Michaels arts and crafts store.

*No nuptial bliss here. Originally, there was nudity and sexuality planned during the post-wedding bedroom scene but was deleted due to Steinfeld's age. Thanks goodness, because even though the two actors barely do more than slightly paw each other and kiss, you still might want to call a child abuse hotline.

*The final straw: when Juliet's hot-tempered cousin Tybalt (played with nostrils at a constant flare by "Gossip Girl"'s Ed Westwick) enters the street arena with his posse to challenge Romeo's pal Mercutio to a swordfight, laughter rang out when the camera suddenly went slo-mo and dust blew across the screen. And this is when the story is supposed to get truly tragic.

The changes in the final scene are just as unfortunate, but to see them, you will have to stay through to the end. 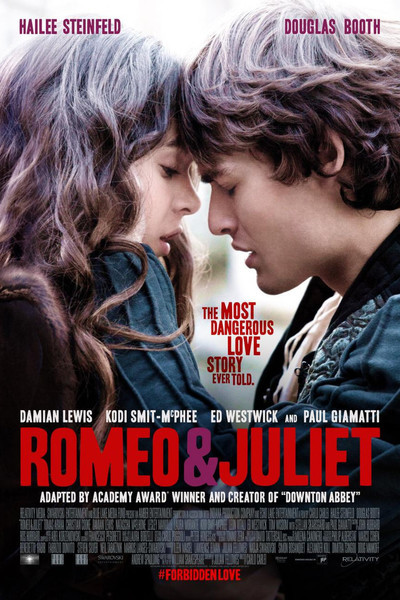 Lesley Manville as The Nurse