"Rolling Thunder Revue: A Bob Dylan Story" is one of the most frustrating Martin Scorsese films as well as one of the most out-of-character. Decades in the making, in a way, this is an engaging but disorganized and long-winded (two hours, twenty minutes) account of the time in 1975 that Bob Dylan, nine years on from his motorcycle accident, convened a vagabond caravan of musicians, poets, reporters, photographers, money men, and hangers-on to tour the United States in the lead-up to the country's Bicentennial celebration. The tour was a bust, financially and in terms of cultural impact—or at least that's how Dylan, 78 at the time of this film's streaming premiere, remembers it, while cautioning Scorsese and the viewer that he barely remembers anything at all. Nevertheless, the Rolling Thunder Revue rejuvenated Dylan as a musician, in the manner of Elvis Presley's 1968 "comeback" special. And it generated enormous amounts of tour footage, some of which is reproduced here, within a highly conceptual framework, by Scorsese.

The issue of authorship is nearly as central to this movie as the story of Dylan roaming the United States, driving his own tour bus and performing in small- and medium-sized halls, accompanied by the likes of Joan Baez, Ramblin' Jack Elliot, Roger McGuinn, Scarlet Rivera, Joni Mitchell, Ronnie Hawkins, and (in one of his final filmed appearances) Sam Shepard. Scorsese, who over the course of his long career has essentially stamped certain American rock acts, including Dylan, The Rolling Stones, and The Band with "Property of Martin Scorsese," is the credited director, naturally. And as edited by Damian Rodriguez and David Tedeschi, the film bears many Scorsesean hallmarks, including surprising transitions from one idea to the next, and sequences that have been cross-cut in order to provoke questions and create sensations rather than serve up fixed meanings or answers.

But once you look at what the thing actually is, what it's made of, and how the pieces have been arranged, things get curiouser and curiouser. The film is woven around footage shot during the tour by real-life Chicago cameraman Howard Alk (1930-1982), who was hired by Dylan to make a project that somehow never got turned into an actual feature film. The footage has been re-contextualized by Scorsese and presented as the work of European filmmaker Stefan Van Dorp, a nonexistent person played by Argentinean performance artist Martin von Haselberg (husband of Bette Midler, briefly glimpsed in 1975 footage). In interviews, Van Dorp talks in the cliched "high culture" cadences of a mid-20th century moneyed WASP, and speaks on camera of his subjects and collaborators (excluding Dylan and a few others) in an exasperated, withering manner.

Other fictional or questionably involved characters enter the narrative as well, including Paramount Pictures CEO James Gianopulos as the tour promoter; actor Michael Murphy as nonexistent Congressman Jack Tanner (whom he played in two projects for the late Robert Altman); and Sharon Stone, costar of Scorsese's "Casino," as herself, telling the story of how she attended one of the Rolling Thunder Revue concerts as a 17-year-old in the company of her mother and was invited to join the caravan.

Is Scorsese trying to create his own, epically scaled answer to "This is Spinal Tap" or "Zelig"—a mock documentary integrating the real with the fictional, prompting audiences to question the distinctions between them? Maybe. "The Rolling Thunder Revue" starts with a snippet of a silent-era George Melies film of a magic trick and returns to it later, as if to signal that an aspect of illusion is built into the project. The collision of verified events and never-before-discussed anecdotes (some of which, like Congressman Tanner's friendship with President Jimmy Carter, are obviously fabricated) undermines the veracity of everything in the story, like the anecdote about Rivera supposedly taking Dylan to see KISS and inspiring him to don Kabuki-inspired  facepaint.

And to what end? What you're seeing, for the most part, are real events that happened in real places to real people, and which therefore have archival value. Even if one were to thread up unedited footage at random, the images and sounds would still tell us a lot about the culture and emotional temperature of the U.S. circa 1975. The concert footage (much of which concentrates exclusively on Dylan, regardless of assurances that the tour was a democratic endeavor) is riveting, showcasing inventive re-arrangements of many Dylan classics, including "Simple Twist of Fate," "A Hard Rain's Gonna Fall," and "The Lonesome Death of Hattie Carroll."

In comparison to the material that stands on its own, the absurd touches feel glommed-on and pointless, and much of the time, they don't work. When the Van Dorp character prattles about how he wanted to show "the contrast between the excesses of the people on the tour and the dissolution of society [in] the land of pet rocks and Slurpees from 7-Eleven," it's like being forced to listen to a reading of a satirical short story by a fiction writer who understands the dictionary definition of satire but never figured out what, exactly, he intended to make fun of. The culture itself? The popular art form that tries to respond to the culture? The mentality of the artist mocking other artists trying to respond to the culture?

This is a documentary, and at the same time, it's also a prank or a joke. But it's not particularly funny when it's plainly trying to be. Why? Maybe because it's lumpy and unfocused, meandering from absurdism to poker-faced sincerity (as in self-contained sections about the plight of Native Americans and the fate of one of Dylan's real-life subjects, wrongly imprisoned boxer Rubin "Hurricane" Carter). Or maybe it's because when you think of Scorsese, one of the great living American filmmakers, a lot of different words and phrases spring to mind, but "goofy" and "wry" and "light touch" aren't among them.

The unsung hero in all this is Alk, whose footage gives the movie its artistic and historical nucleus. He was friends with Dylan from 1963 on, and worked with him on several movies, including "Eat the Document," "Hard Rain" (also about the Rolling Thunder tour) and Dylan's semi-improvised, self-directed "Renaldo and Clara" (where a lot of the footage comes from). Aficionados of analog-era, fly-on-the-wall nonfiction camerawork will admire the intelligence that Alk brings to every composition and camera move—assuming it's Alk's work that we're mostly seeing here, and it's impossible to know for sure, since Scorsese never identifies the footage that way, and lets us believe that "Van Dorp" shot all of it, because that's the joke. There are instances where he even seems to have dubbed Dylan and other real-life personages addressing Alk as "Van Dorp."

Meanwhile, Alk's unobtrusive artistry shines through anyway—as in a lovely moment where Dylan and Ginsberg visit the cemetery where Jack Kerouac is buried, and the camera briefly sneaks away from the two men swapping Kerouac quotes to wander over to the writer's grave site, perfectly framing the rectangular headstone to create a frame-within-a-frame.

At one point, Van Dorp gripes about an obsequious Rolling Stone reporter, real-life journalist and gadfly Larry "Ratso" Sloman, stating that "he didn't want anyone else with vision around." This feels like a self-deprecating joke on Scorsese's own status as an auteur who puts his name on nonfiction projects partly comprised of archival footage created by others. But erasing credit for another artist's work—even an obscure one, even inadvertently, and even in the service of satire and conceptual art—is a dicey business. It backfires here, contributing to the current national malaise wherein facts are provisional and nothing can be trusted anymore, and making the project feel insensitive to the hard-won achievements of real people without whom it would not exist. Buried beneath layers of metafictional tomfoolery is a moving film about an anonymous artist whose achievements remain unrecognized, even by people ideally positioned to throw a spotlight on them. 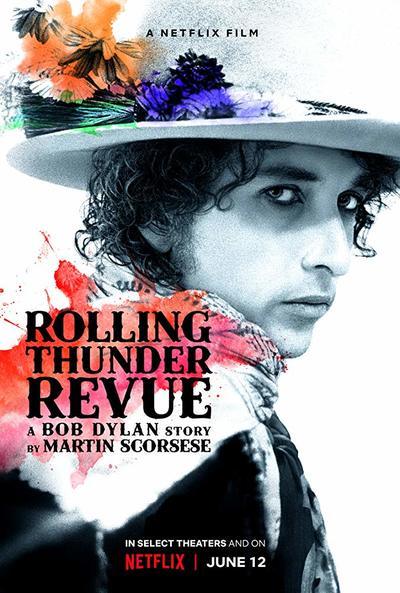 Allen Ginsberg as The Oracle of Delphi

Joan Baez as The Balladeer

Scarlet Rivera as The Queen of Swords

Patti Smith as The Punk Poet

Roger McGuinn as Himself

James Gianopulos as The Promoter

Jack Elliott as The Sailor

Sam Shepard as The Writer

David Mansfield as The Innocent

Ronnie Hawkins as Himself

Anne Waldman as The Word Worker

Ronee Blakley as The Ingenue

Joni Mitchell as The Artist

Sharon Stone as Herself

Michael Murphy as The Politician

Roberta Flack as Herself

Claudia Levy as Herself

Gordon Lightfoot as Himself