Rita Moreno: Just a Girl Who Decided to Go For It

"Rita Moreno: Just A Girl Who Decided To Go For It," a documentary directed by Puerto Rican documentary filmmaker Mariem Pérez Riera, is a mash note to the multitalented force of nature that is Rita Moreno—actress, singer, dancer, and first Latina to achieve the Triple Crown of acting awards (winning a Tony, an Emmy, and an Oscar).

The film is a fascinating and at times sobering look at her romances, and her personal struggles with self-esteem and self-worth, as well as the racism, misogyny, and sexual abuse she endured throughout her seven-decade career. Riera's documentary also addresses the extremely limited ideas Hollywood has of Latina and other actresses of color, a problem that persists in the present day.

Part of the challenge with creating a documentary about someone like Moreno is, how do you fit a life as big and bold and full of heartbreak, setbacks, and triumphs as hers into a 90-minute documentary?

Riera does this by starting at the present, with Moreno preparing decorations for her 87th birthday party and working on the set of the now-canceled Netflix revival of "One Day At A Time." Then Riera works backwards, starting with Moreno’s difficult childhood first in Puerto Rico and then in New York City. Riera film adds some visual panache to the otherwise standard talking head and archival footage format. Animations depict Moreno as a paper doll while the film touches on her major life moments and breakthroughs, like being a child singer in Puerto Rico, meeting studio honcho Louis B. Mayer as a teenager in New York City, and appearing in the classic musical "Singin’ in the Rain" with Gene Kelly.

The film features a list of interviewees who illustrate how enduring and expansive Moreno’s career has been: Eva Longoria, Karen Olivo, Morgan Freeman, Norman Lear, Hector Elizondo, fellow EGOT winner Whoopi Goldberg, George Chakiris (her co-star in "West Side Story"), Justina Machado, Gloria Estefan, Tom Fontana (the creator of the early HBO prison drama "Oz," where Moreno did some of her career-best acting as Sister Peter Marie), and Lin-Manuel Miranda.

Of course, one could make a documentary solely about each distinctive phase of Moreno’s career. Her stunning, Oscar-winning turn as Anita in "West Side Story." Her doomed on-again, off-again romance with Marlon Brando. Her activism. Her work in television, which includes appearances in "The Electric Company" and "The Muppet Show." Her work on Broadway.

And part of where the film suffers a bit is that it can really only glance at these topics instead of exploring them more fully, given the time constraint. I would have particularly liked to see Riera connect the racism and sexism Moreno faced—being typecast, being made to play ambiguously ethnic “island girls” who were sexual objects for white men, paint her skin darker, and put on a generic “foreign” accent—to the larger systemic problems that Black, brown, and Indigenous actors still face in Hollywood to this day. Since Moreno’s historic Oscar win in 1962, only four Latinas have been nominated in the best-actress category: Fernanda Montenegro for "Central Station" in 1998, Salma Hayek for "Frida" in 2003, Catalina Sandino Moreno for "Maria Full of Grace" in 2004, and Yalitza Aparicio (who is also Indigenous) for "Roma" in 2019. Only five other Latina actresses have been nominated for Best Supporting Actress in that time period, and there was a two-decade gap between Moreno’s win and the next time a Latina was nominated in that category.

While Moreno accomplished so much and did break down some barriers, she did so in spite of Hollywood expectations, and in spite of the limited imaginations of studios executives, directors, and producers and their ideas of what a leading lady should look and act like. And, unfortunately, many actresses of color still face the same roadblocks she did.

The film works best when the camera is focused solely on Moreno as she recounts her struggles and also her “bliss years,” when she started working in television and returned to the stage in the '70s. Moreno, who is brash and self-effacing, thoughtful and charismatic, has such a commanding presence on camera; every time she speaks, you unintentionally lean in a little closer, hanging on to every word she has to say. Moreno is one of the last Great Movie Stars, someone who has a larger than life presence even when doing something as mundane as applying makeup or talking through outfit ideas with her daughter before an awards show.

The film is framed as a story of uplift and triumph; at one point Moreno is referred to as “the embodiment of the American dream.” However, Moreno is a pioneer. That can be a lonely and painful thing, especially for a woman of color. "Just A Girl Who Decided To Go For It" shows us, even if it's too briefly, the steep price she had to pay to pursue it. 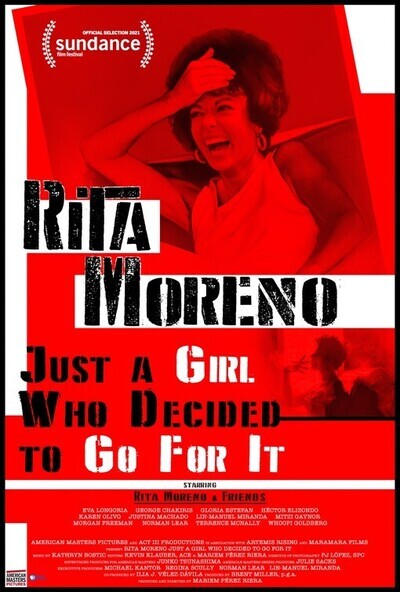 Rita Moreno as Self

Morgan Freeman as Self

Whoopi Goldberg as Self

Eva Longoria as Self

Justina Machado as Self

Gloria Estefan as Self

Norman Lear as Self

Karen Olivo as Self