Somehow, fledgling Hong Kong actor-turned-director Juno Mak's "Rigor Mortis" is even stranger than the movies that inspired it. This is saying a lot, since "Rigor Mortis" is an homage to the "Mr. Vampire" films, a series of popular horror-comedies from the '80s about hopping vampires. Set in Macau's most poorly-lit apartment building, the film is a supernatural mystery involving ghosts, exorcists, and yes, a hopping vampire, too. It's uneven, and more than a little mystifying, but "Rigor Mortis" is also a bittersweet coda to a deliriously silly series of films.

After moving into a really sketchy tenement building, Chin (Siu-Ho Chin, star of the original "Mr. Vampire"), a sullen, washed-up actor, tries to commit suicide. Fortunately, he's rescued by Chan Yau (Anthony Chan, another "Mr. Vampire" refugee), a cagey, but friendly exorcist. Chin's neighbors similarly treat him like family, but they're almost all unhappy or emotionally disturbed. Single mother Feng (Kara Hui) and her albino son Pak routinely break into Chin's apartment, and Auntie Mui (Hee Ching Paw) mostly keeps to herself, fretting over crotchety husband Tung (character actor Richard Ng). Most importantly, Yau refuses to do anything about the ghosts that literally haunt his neighbors, not even after Tung's bloody body is discovered.

Chin and Yau's odd-couple partnership is the core of the narrative, but the film's main strength is its ensemble cast of veteran Hong Kong actors. These performers are consistently more exciting than the characters they play. Their nuanced mannerisms keep "Rigor Mortis" interesting, even when the film periodically adopts the more boring tropes of recent Japanese ghost stories like "The Grudge" (Takashi Shimizu co-produced the film). For example, Paw's quiet grace, and furtive glances hint at greater depths to her otherwise poorly-defined character. She steals the film away from her co-stars in a brief but memorable scene where she, holding in tears, whispers to Tung's corpse: "Dear, we're getting old[...]you promised you'd come back to me." On paper, the scene is maudlin, and hackneyed. But thanks to Paw, Mui's pleas are so moving that you wish the rest of the film was about her character.

Thankfully, Chan, the film's real star, is just as commanding as Paw. His fidgety performance is reminiscent of Roddy McDowall's character from "Fright Night." Both McDowall and Chan play characters that are too scared to admit that they believe in the supernatural. And both men express their frustration through forlorn stares and defensive slouching. Chan conveys so much just by flaring his nostrils and tapping his feet. It's a magnetic performance, and Mak does a great job of highlighting its more endearing quirks.

Beyond its excellent ensemble cast, "Rigor Mortis" is only as involving as its central mystery. Which is fine, since the film coasts on funereal atmosphere whenever its plot and dialogue wear thin. Mak's direction is unfocused, but energetic enough. He infrequently takes time to make his characters like retirement-aged Wong Kar-wai characters, as when he films a character sucking languidly on a cigarette, and exhaling in slow-motion. The film's sound design is equally impressive. It establishes a whole world out of the frantic chirping of domesticated birds, the slapping of flip-flops on concrete, and the sizzle of cooking wine in a hot skillet. "Rigor Mortis" may not pay off like it should, but it will leave you wanting to spend more time getting to know its characters. Here's hoping the film's inevitable sequel is worthy of its stars' considerable talents. 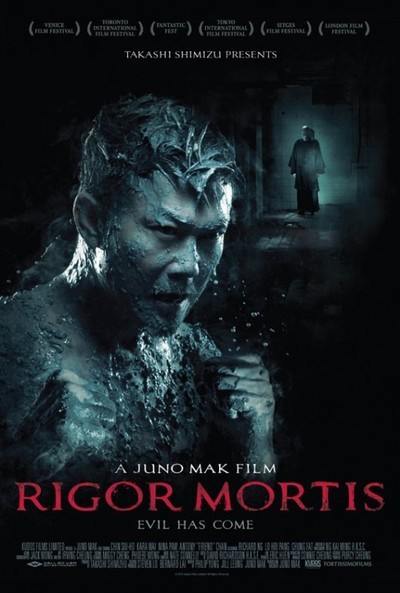