As soon as his son Sasha was born, Henry Nevison often found himself with a camera in hand. He’d film as many home movies as possible, testing the patience of his wife, Jacqui, who realized that the lens had formed a wall between her and her husband. There may not appear to be anything unusual about capturing celebrations and family gatherings on videotape, yet Henry’s compulsion was fueled by a primal need to hold his siblings at arm’s length, framing them in a way that fit the Rockwellian image of American normalcy. He was all too aware of the horrifying dysfunction deeply embedded within his brothers, Howard and Larry, having been a victim of it himself. Yet his inability to open up about it led him to turn a blind eye toward the inherently cyclical nature of sexual abuse, leaving his children to be preyed upon behind closed doors.

The harrowing and courageous documentary, “Rewind,” marks the directorial debut of Henry’s first child, Sasha Joseph Neulinger, who took the name of his maternal great-grandfather as a way of severing any lingering connection to his abusers. He sifted through over 200 hours of home videos shot from his earliest days to the moment he moved out for college, examining the footage to illuminate the story buried within seemingly inconsequential interactions. The ability to read a great work of cinema is not all that different from psychoanalysis, since signs of trauma are often conveyed through nonverbal behavior rather than expositional monologues. I found myself drawing upon the same instincts I utilize for processing nuanced visual storytelling as I regarded young Sasha’s piercing stare, radiating the pent-up agony he is not yet ready to articulate. Apart from its numerous profound achievements, Neulinger’s picture is an extraordinary work of film analysis, inviting the viewer to study certain encounters frame-by-frame as a way of revealing their unspoken subtext.

Consider the moment when Larry’s son, Stewart, rubs the head of a visibly uncomfortable Sasha at the crowded family dinner table, while comedically shrugging at the camera. Or when Henry glances in the direction of Howard—hunched over with his eyes on Sasha—before turning away. Or when Sasha grabs the camera, welcoming the viewer to his show entitled, “The Shit Diaries.” He proceeds to turn the lens on his sister Bekah, whose unamused expression speaks volumes. She can clearly see through his erratic antics because she shares the pain that has spawned them. It’s only a third of way through “Rewind” that Neulinger and editor Avela Grenier provide a full picture of the abuse endured by these kids, which makes its sudden clarity all the more violating. Whereas Henry believes that the molestation inflicted by Larry and Stewart was a misguided attempt at showing their love, eldest brother Howard was motivated by a need to dominate, which he routinely does with an operatic bravado loud enough to silence any cries of protest.

A cantor revered at his high-profile synagogue in New York City and equipped with vocal chords that were “kissed by God,” according to the Pope himself, Howard is skilled at throwing his weight around. He has no qualms with accepting donations from his fellow worshippers, which will aid in paying his legal fees to an attorney who has unlimited sources of funds, enough for Howard to evade justice while the brother he abused rots behind bars. The drawings that Sasha creates to portray the abuse he suffered are visions of hell as arresting as any illustrated by Hieronymus Bosch. He shows a doppelgänger of himself urinating blood into a pool of flames occupied by a Howard-esque devil, while a girl resembling his sister lies impaled with spikes. From the devil’s mouth emanates the warning uttered by Howard to his terrified nephew: “If you tell, I’ll kill you.” This prompted Sasha to have many a sleepless night, fearing that his uncle would crawl through his window a la Bob in “Twin Peaks” and murder him. No wonder the boy grows up feeling unworthy of love, raging at the camera about how sorry he is that he’s done something bad.

What isn’t mentioned here is the fact that Neulinger had a brief career as a child actor. Fans of the Farrelly brothers may recognize him as the young Jack Black in 2001’s “Shallow Hal,” and it’s downright excruciating to revisit his big scene in the film, since the would-be laughs are spawned from the absurdity of an adult giving inappropriately sexual advice to his bewildered son. According to Henry, pain was routinely cloaked in humor during his childhood, as he watched his father being repeatedly berated and ridiculed by his mother, who avoided emotions as much as her husband steered clear of confrontations. This caused Henry to embrace the role of jokester in his fractured home, providing a source of escapism that he would later funnel into his incessant filming (he subsequently has built his own career as a historical documentarian). Just as Sasha’s bravery in speaking out at a vulnerable age opened the floodgates on his family’s history of abuse, his adult self has resolved to help his loved ones heal by forcing them to confront their past, revisiting the exact locations where pivotal events occurred and walking through them step by step.

Among the film’s great heroes is Sasha’s psychiatrist, Dr. Herbert Lustig, who is moved to tears when recalling how his young client heeded his advice while taking the stand to testify against Howard. He instructed the boy to place a yarmulke on his head as a source of spiritual comfort, symbolizing how the boy’s beloved great-grandfather, Joseph, would protect him throughout the hearing. Lustig argues that Sasha’s firmness in declaring Howard’s guilt is the only victory that matters, since the ultimate verdict is left in the hands of an easily corrupted justice system. Detective George Ohrin recounts how Larry swiftly confessed once he failed a polygraph test, while Howard allowed his case to drag on for years, banking on Sasha’s desire to move on with his life, thus securing for him a plea deal that involved no prison time. Instead of lingering on this egregiously undeserved outcome, Neulinger emphasizes the relief he experienced as a teenager finally capable of loving himself once again, basking in the warmth of family and friends as he dances at his bar mitzvah.

Equally touching is a wonderfully eccentric funeral scene from earlier in Sasha’s youth, as he insists that his pet guinea pig be buried directly in the ground rather than in a box so that it could be consumed by the “plants and veins” of Mother Earth. This line turns out to be a prophetic one, since Neulinger has never opted for a filtered reality requiring painful memories to be stored in boxes. In many ways, “Rewind” is a therapeutic masterwork on par with Bing Liu’s “Minding the Gap,” both of which affirm how the essence of cinema is the act of seeing ourselves reflected in one another’s stories, as demonstrated by how Henry’s memory of focusing on bathroom tiles while being abused mirrors his daughter’s recollection of losing herself in the picture of a cat, thereby shielding her mind from the transgression felt by her body. Watching the film, I was overcome with the same exhilaration that accompanied my viewing in early 2018 of the astonishing testimonies made by hundreds of “sister survivors” united in their mission to prevent their abuser, disgraced U.S. Olympics doctor Larry Nassar, from taking advance of any more innocent souls. Mission Kids, the child advocacy center founded by Neulinger, is a natural extension of that same desire to create a safe space for us to share our truth, and I have no doubt that “Rewind” will have a similarly transformative impact on countless lives. This is one of the year’s best films. 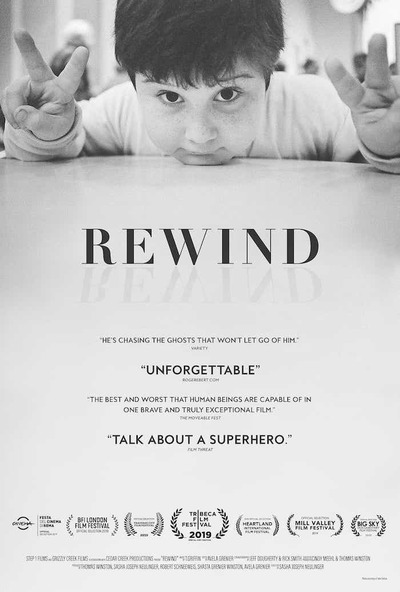