“I rape myself ’til I bleed” is a line of dialogue in “Retaliation,” a gross passion play and slow-burn revenge thriller about Malcolm (Orlando Bloom), an angry demolition worker who, when he was 12 years old, was sexually abused by Jimmy (James Smillie), a country priest. “I wake up sweating like a rapist” is another line of dialogue in “Retaliation,” a grubby kitchen sink character study that, within 15 minutes, shows us Bloom sodomizing himself with a lubed-up truncheon. Or maybe it’s a large stone pestle?

Either way, the thing to know about “Retaliation” (originally titled “Romans”) is its creators go to great lengths to shock viewers into understanding what’s really going on with Malcolm. So most conversations in “Retaliation” are as oppressive and loveless as the movie’s sad and programmatic sex acts (doggy-style sex after three minutes; cyber-sex with the lights out before the 22-minute mark; more sex from behind five minutes later, this time in a pub cellar).

Some relief ostensibly arrives later on, when Malcolm finally confronts Jimmy. But the makers of “Retaliation” soon go back to pushing viewers’ buttons, which makes it even harder to stomach their flailing pseudo-seriousness. “Retaliation” may be effectively provocative, but only because its creators put more effort into upsetting viewers than converting us.

Granted, much of Malcolm’s story feels like a defense of his disturbing and inexplicable behavior. He’s not comfortable talking to anybody about what happened, especially not his mother (Anne Reid), a prim and anxious older woman who chides her son about his symbolically freighted day job: knocking down churches. "There's a lot of churches,” she says. “You won't be able to knock 'em all down.” Malcolm understandably doesn’t know how to respond to his mother.

Malcolm is often defined by his violent behavior, presumably because he’s on the verge of a personal breakthrough. But almost everything in “Retaliation” feels like an empty provocation, so pub dweller Joe (Alex Ferns) talks ups Malky’s glory days as a regular bar-fighting character. And love interest Emma (Janet Montgomery) complains about “f**ing [Malcolm] in a dirty pub cellar”: “I mean, you look like you, but you're not you. I don't even know you.”

Malcolm threatens to beat up a pair of rowdy Millennials while he shops for food with his mum. He owns a small mallet with his nickname, “Malky,” engraved on its shaft. Malcolm also brawls with another rape victim, with an even more sordid backstory, in a church. Which leads to a speech about a rape and a beheading. “You know how heavy a severed head is” is another line of dialogue from “Retaliation.”

Malcolm sometimes shows signs of human warmth, though even these scenes are somehow both underwhelming and ham-fisted. In one scene, Malcolm bumps into a young boy who may or may not be his inner child. In another, Malcolm stares at the raindrops on his car windshield after Emma dumps him. In a third scene, Malcolm carefully takes down a wooden effigy of Christ from a church altar. I’ve never felt more concerned for a religious icon’s safety.

It’s easy to be suspicious of Malcolm since he’s often treated as a passive victim of his own violence. Co-directors Ludwig and Paul Shammasian tend to dwell on the cyclical nature of Malcolm’s violence instead of, y’know, holding Malcolm responsible for his actions. In turn, “Retaliation” feels like a monotonous series of violent encounters. And while Malcolm’s actions (probably) mean something to him, the Shammasians’ version of his story is only so illuminating.

The Shamassians seem to pity Malcolm, so he comes off like the worst kind of bully, the kind that use their impotence as both a shield and a weapon to hurt others. Bloom is effectively chilly, but the Shammasians, along with screenwriter Geoff Thompson, don’t really give him much room to breathe. Because who needs to develop a character—or a story, or a mood—when you can just beat viewers into submission?

If “Retaliation” were a friend, you’d eventually avoid them. You might want to stick it out with them, but soon enough, you would give them a wide berth. Because if “Retaliation” were a friend, it’d be the kind whose neediness overwhelms you with alarming regularity. You don’t really need to feel somebody else’s pain to know that they should stop treating you like a punching bag, even if that’s the only way they know how to behave. Or, to borrow a line from “Retaliation”: “Your guilt is not my responsibility. Your shame is not my responsibility. I got my own shame to wrestle with.” 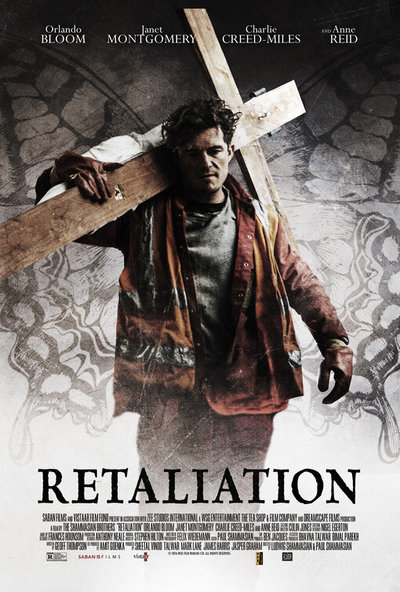 Rated R for disturbing violent/sexual content, language throughout, and some nudity.