In 2017, the “Resident Evil” series of games tore down the action-heavy experience it had built up over the last few installments and returned to basic survival horror with “Resident Evil 7: Biohazard.” Four years later, the series of films of the same name does a similar hard reset, although this one doesn’t go back to the beginning of the films but pushes deeper into the source material, really adapting the first two games, especially “Resident Evil 2” to the screen for the first time. Pushing aside the CGI-heavy action of the Paul W.S. Anderson films, writer/director Johannes Roberts has made a movie that is the most directly inspired by the games of any flick so far in “Resident Evil: Welcome to Raccoon City.” The characters and even the locations will be incredible familiar to “RE” players and the tone feels more connected to a game series that was originally inspired by “Evil Dead.” However, choppy action and clunky storytelling hold “Raccoon City” back from becoming the dread-inducing nightmare that hardcore fans know the game series to so often be.

From the very beginning of “Welcome to Raccoon City,” fans of the games will note the references to the world they know and love. The film opens with a young Claire Redfield and her brother Chris in an orphanage in the heart of Raccoon City, a place run by the malevolent William Birkin (Neal McDonough). Years after a creepy opening in which Claire sees a disfigured girl named Lisa Trevor (Janet Porter), she’s coming back to Raccoon City via a ride hitched with a truck driver. Now played by Kaya Scodelario, Claire has heard that something nefarious is happening in her home town courtesy of the Umbrella Corporation. She picked the wrong day to come home.

It starts before she even gets into Raccoon City, when the driver hits a girl on the road. As he’s arguing with Claire, the girl gets up and walks away. The trucker’s dog goes to lick the bloody spot and anyone who played the early games will yell “Zombie Dog!” at least in their head. (Those damn zombie dogs were one of the most terrifying things in game history.) She eventually makes it to the Raccoon City Police Department building, which has been remarkably recreated from those early games. I wanted to look behind the reception desk in the lobby for ammo.

The inhabitants of the RPD will be familiar to players and even fans of the Anderson movies: Chris Redfield (Robbie Amell), Jill Valentine (Hannah John-Kamen), Albert Wesker (Tom Hopper), and Leon S. Kennedy (Avan Jogia) lead the way with Donal Logue appearing as Chief Irons and chewing all the scenery he can find (his first scene plays like he might think he's in a parody of bad cop movies). While the names may be familiar, the characters are depressingly thin. John-Kamen gives Jill a little spark but Scodelario looks bored, something no one could ever say about Milla Jovovich.

The officers end up splitting up and going to two key locations that will be very familiar: Spencer Mansion, the setting of the first game, and the department building itself, where most of the second game takes place. Roberts openly echoes his filmic inspirations too, primarily trying to make the “Resident Evil” movie that John Carpenter would have directed in how much the master loved films built with the “Rio Bravo” template of “good guys inside, bad guys outside.” A zombie movie that owes a debt to “Assault on Precinct 13”? Sign me up.

So why doesn’t “Welcome to Raccoon City” live up to that potential? It gets the sticky icky practical effects right but Roberts and cinematographer Maxime Alexandre struggle with producing actual tension. It's still difficult for the films to replicate the games' honest terror that emerged from survival horror games that were typically very low on ammo and populated by enemies that were increasingly hard to kill. There are too many scenes in “Raccoon City” that have poor geography—flash cuts of zombie heads growling and guns being fired. Repeat. There were times when I wasn't even sure who was almost getting eaten. We need to know where the characters are in the space for tension to exist. Otherwise, it’s just hollow imagery.

There’s also a sense that all of this will mean even less to those who haven’t played those early games. My greatest rush came from recognizing locations that I've seen previously with a controller in my hand. That’s not quite filmmaking—it’s fan service. I want a “Resident Evil” movie that takes these legendary locations and characters and does something fresh and exciting with them. Start with the mythology instead of just ending with it too. And the truth is there’s almost no story to “Welcome to Raccoon City.” After setting up a bunch of familiar faces, Roberts is content to bounce them off some zombies to a predictable final act that brings out some of the iconic big bads from the games. It's depressingly easy to chart where this film is going to go and who's going to make it to the inevitable sequel. There’s one thing a great horror game can never be (and something one couldn’t really accuse the Anderson movies of being either): predictable. 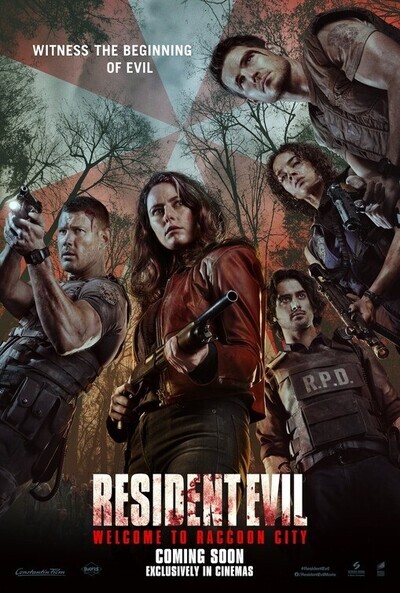 Rated R for strong violence and gore, and language throughout.