“The past can haunt a man” is the first superficially melancholic line that gets muttered in “Reminiscence,” a moody, snail-paced mix of neo-noir and sci-fi, overflowing with similarly indistinct wisdoms about time and nostalgia. It does aptly define the tone for “Westworld” co-creator Lisa Joy’s narrative feature debut as a writer/director, however. Set sometime in the future along the Miami coast—now, devastated by climate change and partially sunken, with a modified version of life still persisting on its belt nocturnally since days are just too hot—“Reminiscence” aims for something existential within a well-recognized film-noir template. Sadly, the result is an unpersuasive, vaguely pessimistic dystopia at best, one that liberally pulls 101-level references from recognizable Hitchcock flicks and neo-noirs alike, only to drown their time-honored spirit in murky waters.

Indeed, you will spot cues from the likes of “Chinatown,” “Blade Runner,” “Strange Days” and even “Minority Report” throughout Joy’s genre entry that culminates in a deeply familiar aura. And while that simple-minded accessibility doesn’t necessarily have to be a bad thing, “Reminiscence” does so little that's original or homage-y with its mélange. Joy’s film just feels so frustratingly generic and second-hand, featuring body doubles and a dizzying spiral staircase that serve no purpose other than telegraphing “Vertigo”-esque visual prompts to the viewer for no narrative or aesthetic reason.

Hugh Jackman’s Nick Bannister happens to be the murmurer of the aforesaid line about the past’s haunting powers. He delivers it through a morose voiceover (one of the many grating overindulgences of “Reminiscence”), introducing his unconventional profession to the viewer in the film’s opening moments. Nick is a private eye who gets to investigate the depths of his clients’ memories—sometimes, to answer a simple question, but often times, to allow them to relive their favorite moments from the past. He and his fellow ex-military business partner Watts (Thandiwe Newton, more emotionally affecting than her one-note part can handle) seem to have a good, platonic thing going in a world where the future offers no hope and past is the only avenue that comes with jolts of optimism buried within. While the duo give freebees to repeat customers often, they still manage to make a living with their memory machine—a cocoon bed and a wired headpiece that plays and projects any memory the client chooses from stashes of discs, as a 3D hologram. Romantic, empowering, peaceful ... there's something for everyone.

So when the resident femme fatale of “Reminiscence” arrives in the form of Rebecca Ferguson’s sultry, markedly sad jazz singer Mae, clad in a spectacular, body-conscious crimson-red gown that could disarm any lethal human in its presence, you know she won’t be up to any good. With misty, Lauren Bacall-esque mannerisms, Mae insists to pop into the machine briefly past the facility’s closing time. She’s lost her keys, you see, and hopes that Watts and Bannister could just retrieve them through a quick peek into her mind. Forgive this attempt to seek real-world logic inside a fantasy, but this request seems to go against everything “Reminiscence” claims to establish about how human mind makes and stores memories. If Mae hasn’t paid attention to the moment when she lost them and can’t recall the whereabouts of her keys, how could a memory of it exist in her mind? And shouldn’t this suspicious request alarm Nick Bannister at once?

Reuniting with several of her artisan collaborators from “Westworld,” Joy renders this hope-starved near-future world with a heavy use of neon lights and shadows, achieving a melancholic quality that is at times mesmerizing, with all its CGI-heavy glory. Still, you can’t help but feel that “Reminiscence” at times chokes on an excess of cheaply made atmosphere, especially through its bloated third act with various overcrowded storylines of side characters—Cliff Curtis’ corrupt police officer Cyrus Boothe and Daniel Wu’s drug lord Saint Joe among them.

Perhaps the greatest crime of “Reminiscence” is how effortlessly it wastes the collective appeal of its A-list cast. In the aftermath, you will be hard-pressed to recall whether Bannister was played by a bona fide movie star or an unremarkable newcomer. Joy has a wealth of stylistic and thematic ideas to spare—let’s hope that she keeps taking risks and making feature-length movies—but this particular rumination on an assortment of genres unfortunately sinks under its own weight.

Now playing in theaters and available for 30 days on HBO Max. 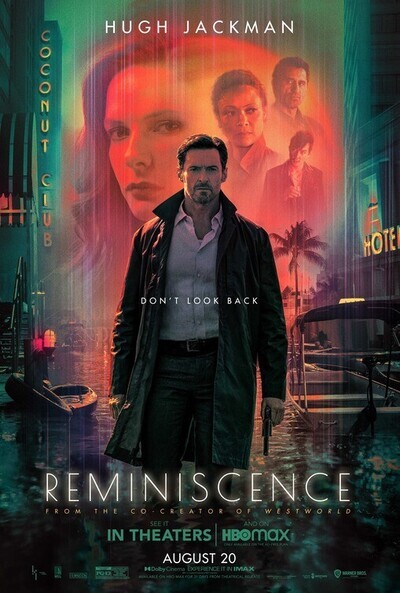