A based-on-a-true-story spy thriller, Trevor Nunn’s conventional yet sneakily absorbing “Red Joan” eases into the familiar mold of “The Imitation Game” at once. As it toggles between two separate eras, Nunn’s period piece frames its story by introducing us to the 80-something Joan Stanley (Judi Dench) first. She lives a quiet life in a British suburb and tends to the cookie-cutter demands of her uneventful days in the early 2000s. Except, this simple old woman (whose story is based on the real-life case of Southeast London’s Melita Norwood) doesn’t seem to be all that ordinary—soon enough, the British Secret Service pulls her out of her quiet retirement and arrests her on the grounds of treason. But did she really commit those crimes and give away Britain’s secrets to the Russians as a KGB spy in the 1930s?

The pull of “Red Joan”—an adaptation of Jennie Rooney’s bestselling novel by screenwriter Lindsay Shapero—oddly isn’t in the search and reveal of an answer to this question. Admittedly, the expected attributes of a slick espionage thriller (like globe-trotting mystique and heart-pumping moments of suspense) aren’t great in number here. Instead, Nunn’s film works better as a period melodrama and I don’t mean this as a slight at all. Unapologetically feminine in the vein of Lone Scherfig’s overlooked gem “Their Finest,” “Red Joan” resolves into a genuine study of an intelligent and ideologically budding young woman. As the old Joan settles into an interrogation session in a drab room (and repeatedly denies every accusation), the film’s lengthy flashbacks chart Joan’s opinionated past in thoughtful increments. Nunn swiftly takes us back in time to 1938, when Joan (a gracefully convincing Sophie Cookson) was a green but genius physics student at Cambridge, grabbing onto new inspirations and expanding her political horizon while growing into her sexuality.

The initial catalyst to Joan’s awakening enters her life through an open window. To work around the strict curfew of her dorm, the confident Sonia (Tereza Srbova) climbs into Joan’s room with movie-star glamour and in due course, introduces Joan to her fiery cousin Leo (Tom Hughes), a dedicated communist like herself. Allured by their world of ideas around societal justice—and equally swept away by the noisemaker Leo, who patronizingly calls her “my little comrade”—Joan joins in their meetings and rallies against Hitler. The advancing timeline gently pushes Leo out of the picture and introduces a new partner-in-crime/love-interest for Joan, the gentlemanly professor Max Davis (Stephen Campbell Moore). Working out of a government laboratory and eventually becoming lovers during a perilous cross-Atlantic trip, the duo shares a joint view of the world but differs in their respective implementations. Further muddying the waters is Max’s marriage and inability to get a divorce from his wife.

It would be too easy to dismiss the romantic entanglements of “Red Joan” as fluff, but along with screenwriter Shapero, Nunn treats Joan’s affairs with the respect they deserve, while never losing sight of her as an intellectual. A virgin until she gets involved with Max—thankfully, the film doesn’t brush over a very crucial sex scene—Joan matures in her dealings with men, learning about both male entitlement and masculine nurturing. In other words, we stay within Joan’s womanly point of view throughout and even halfway understand the basis of her unlawful actions when she finally admits them to both her son and the stone-faced interrogators.

Turns out, Joan didn’t just pass on her country’s nuclear secrets in the innocent name of devotion—in reality, she took up an ideological agenda entirely of her own after seeing the catastrophic atomic bombs dropped on Hiroshima and Nagasaki. She had thought it was only with access to equal information could the superpowers be on balance with each other, and stopped from such disastrous actions in the future. While this reasoning doesn’t seem to hold much historical accuracy, it makes sense within the context of a sound film that commendably insists on differentiating a woman’s inexperience from naïveté—“Red Joan” doesn’t burden its female protagonist with the latter.

Capably lensed by cinematographer Zac Nicholson with a focus on the period’s earthy colors and textures and costumed to perfection by Charlotte Walter (who also dressed “Their Finest” with the same level of attention to the era’s knitwear and suiting), “Red Joan” leaves a lasting impression mostly with its flashback scenes. While Judi Dench is flawless in bringing time-spanning depth to her melancholic character (with accidental nods to her infamous “M” persona), her contemporary segments are comparably bland by narrative design. Uneven it may be, “Red Joan” still emanates a memorable essence, one that’s refreshingly and believably feminine. 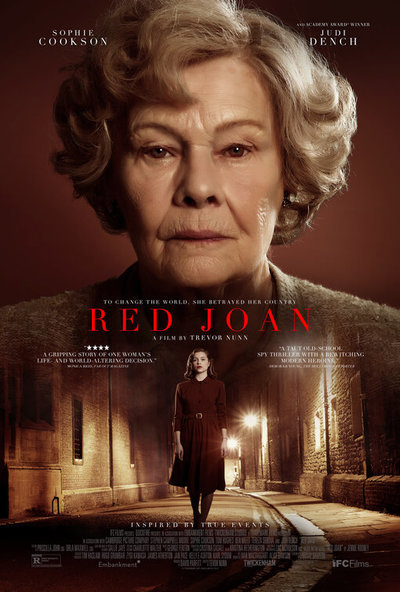