On November 8, 2018, the town of Paradise, California, was destroyed by the deadliest fire in the state's history, razing countless homes and businesses and displacing 50,000 citizens. Rebuilding the place was an agonizing feat of vision, money, and willpower. Between the ready-made Biblical signifiers and the endless array of news, documentary, and cell phone footage recounting what happened, it was inevitable that somebody would tell the story as a feature film. That the director of "Rebuilding Paradise," Ron Howard, is somebody who knows a fair bit about fire (see "Backdraft") and team efforts (particularly in NASA-themed projects like "Apollo 13" and HBO's "From the Earth to the Moon") ensures a level of authenticity and humanism.

The result, a National Geographic production, is a gripping and moving story, even though it never quite lives up to its opening section, which is directed by Howard and edited (by M. Watanabe Milmore and Gladys Murphy) with such elegance and visceral power that it might be the most impressive piece of storytelling Howard has ever been associated with.

We're dropped into the middle of hell, watching flames consume forest land, residential neighborhoods, businesses and campgrounds as citizens flee and government officials try to help them. There's no narration in this opening section, little score, few onscreen titles to orient us, and no sense of geography or time: just a continuous present-tense disaster that triggers primal dread and panic. Even when things settle, and we get a larger sense of the individuals affected by the fire, the survivors and helpers are mostly treated as part of the present-tense landscape, experiencing the disaster as it unfolds rather than recollecting it in tranquility.

There's a long tradition of nonfiction filmmaking that aspires to be "pure cinema"—i.e., a work that is more about picture, sound, rhythm, tone, and visceral experience than literary or journalistic qualities (although there's plenty of the latter; you just have to intuit it). The recent documentary "Apollo 11" and earlier nonfiction classics like "Koyaanisqatsi" and "Berlin: Symphony of a Great City" (which you can watch on YouTube) are three good examples in nonfiction, though arguably there should be a lot more. Documentary filmmaking is so strongly associated with education and explanation that there often seems to be a reluctance to take creative chances, perhaps out of fear that viewers might get confused, annoyed, or impatient.

Sure enough, Howard and his team settle into a groove that's more orderly and predictable. And even though this decision makes creative sense in context (this is a story about reconstructing order from the ashes of chaos, and a group of devastated individuals coming together as a do-good collective) a bit of magic evaporates from what had initially been a strikingly un-Howard like, at times borderline experimental production.

You might also get frustrated at the way the movie treats recurring characters. Where a handful of government officials are identified by their names and jobs, and developed throughout as fully-dimensional people, others remain fuzzy or flat, and you end up labeling them vaguely in your mind, as "the school administrator who wants the school to come back" or "the homeless family that wants to have a home again." This wouldn't be noticeable had the entire project stuck to the "pure cinema" model, but as is, it plays as inconsistent or inattentive. One might also wish for more specific details about how, exactly, the rebuilding process was financed and orchestrated. You get the impression that a tragedy on this scale can be overcome just by people joining hands and working hard and being nice to each other, when we know from history and recent events that it's just not enough.

Still, the imagery of infernos, charred rubble, tearful faces, and cathartic joy carries the movie through to its inspirational final act. And there are many strong moments of human connection along the way, as when officer Matt Gates tells an interviewer on the scene about his encounter with a woman he saw wandering by the side of the road. "I went over and hugged her because I had been looking for her body," he says, standing in front of his squad car, emergency lights flashing. Then he starts to cry, gets embarrassed, and walks out of frame, and the image holds on the empty space where a person once stood. 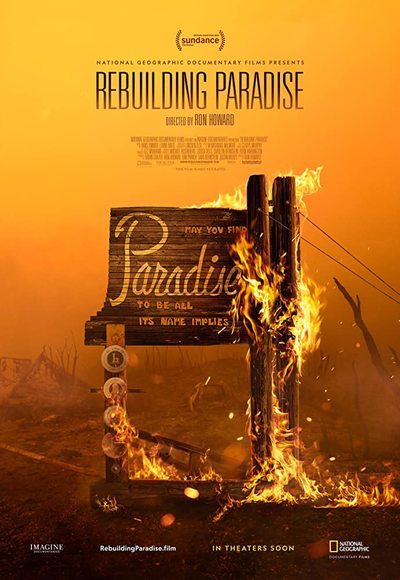