Reaching for the Moon

"Reaching for the Moon" is one of those frustrating biopics that try to cram in so much about a famous person's life that they end up feeling superficial, rushed and ultimately unenlightening.

The famous person in question here is Elizabeth Bishop, the celebrated, influential American poet and winner of the Pulitzer Prize in 1956. Miranda Otto plays Bishop with a palpable chilliness that eventually thaws the longer she stays in Rio, the lush wonderland where she lived and loved for a fruitful and fraught period of 15 years. But getting inside her head—inside her process—remains elusive, leaving us at arm's length.

Thankfully, Brazilian director Bruno Barreto doesn't try to encompass the entirety of her life. Instead, he focuses on Bishop's romance with famed architect Lota de Macedo Soares, creator of Rio's Flamengo Park. Veteran telenovela actress and force of nature Gloria Pires gives a charismatic performance that provides this otherwise-safe film with much of its verve. After all, this is the kind of movie in which the title, "Reaching for the Moon," appears on screen, and then we see Elizabeth looking longingly at the moon from the deck of a ship carrying her southward from New York City.

The script from Matthew Chapman and Julie Sayres, based on the Carmen L. Oliveira book "Rare and Commonplace Flowers," begins in 1951 as the 40-year-old Elizabeth is struggling to compose what would become her most famous poem, "One Art." (It begins: "The art of losing isn't hard to master.") Hoping for inspiration, she accepts the invitation of a former Vassar classmate, Mary (Tracy Middendorf), to visit her and her lover, Lota, at their secluded Shangri-La just outside Rio de Janeiro.

If nothing else, "Reaching for the Moon" is a feast for fans of mid-century modern design. The bold and sleekly minimalist interiors, the tailored, feminine dresses, everything down to the tea sets is carefully chosen and classically stylish – as if an entire film had been set inside a Design Within Reach store.

Initially, Elizabeth and Lota clash: The poet doesn't get the architect's forward, friendly manner, the architect thinks the poet is stuck-up and defensive. "You are imperious, you are aloof, and you drink good whiskey alone," Lota announces cuttingly as a means of foreplay.

Melodrama ensues as jealousy bubbles up between these supposedly mature, accomplished women; the image of Elizabeth biting hungrily into a juicy piece of fruit as she watches Mary and Lota cavort in the yard is good for a giggle. But! Taking that bite also leads to the allergic reaction that keeps Elizabeth in Rio longer than she'd planned and gives her time to explore her curiosity about this person and this place. Naturally, opposites attract, but the speed with which Lota tells Elizabeth she's in love with her is dizzying. In time, they settle into an uneasy love triangle with Mary and jointly raise an adopted baby girl.

In scene after scene, Barreto shows Elizabeth as she struggles to create great art from the details and moments of daily life. She walks and talks to herself, smokes and drinks by herself and often gets drunk to the point of passing out and falling down. But we never truly understand what drives her, or what inspired her to use her powerful, verbal brain for poetry, of all things. Flashbacks to her childhood explain her emotional defensiveness and fear of abandonment in the simplest and most cursory of ways.

But at one of the lowest points in her alcoholism, Elizabeth offers this piercing bit of insight into her own behavior: "I don't drink because things go wrong. I want to drink every minute of every day – things going wrong just gives me the excuse I've been looking for." And yet, the champagne continues to flow as her relationship with Lota (and he movie itself) settle into a dysfunctional lull. "Reaching for the Moon" also alludes fleetingly to the military coup that upended the country's democracy during this period, but doesn't make clear what effect such political tumult had on its citizens.

It's hard not to admire the intentions of a movie that depicts two exceptional women living exactly the way they wanted, together, outside the expected societal norms of the time. But the tone of the film itself feels unfortunately conventional—the opposite of the approach Elizabeth and Lota took in their personal and professional lives. 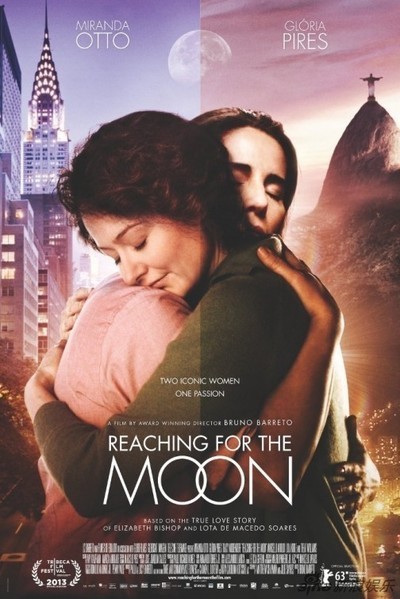