Most of us have a favorite dish from our childhood. Something so wrapped up in nostalgia, that even if it’s bad for you or hard to make, you’ll endure the stomach pains or time demands just to taste it again. Somewhere in your subconscious is a dish that brings you back to the table of your old family home. Maybe it’s your mom, dad or beloved grandparent serving you the plate of something so deliciously steamy, just the smell wafting from the kitchen is enough to make you forget your present-day grown-up troubles for a minute or two.

Although Eric Khoo’s movie is named “Ramen Shop,” there’s surprisingly little ramen in it. Instead, the comfort food of choice for Masato (Takumi Saito) is Bak Kut Teh, a Singaporean pork rib soup that his mom used to make. It’s a recipe that the young man and his Japanese father never learned how to make before her untimely death. Years later, Masato works at a ramen shop with his father and uncle, and he becomes a master of one side of his culinary heritage but not the other. After his father dies, Masato decides to visit Singapore to find his mother’s side of the family and reconnect with the Singaporean cuisine that ties them all with the help of a local food blogger, Miki (Seiko Matsuda).

In Masato’s quest to find his family and his favorite childhood dish, he discovers not only long lost relatives and new culinary delights but also the war scars that tore his family apart decades ago. Much in the same way the Western nations have not forgotten about the atrocities committed by Nazis in World War II, several Asian countries, including Singapore, have not forgiven Japan for its deeds from that era. During Masato’s visit, there’s a news report discussing a museum exhibit commemorating the anniversary. Masato may be the product of two former opponents, but it was his parents’ mutual love of food that brought them together, and it could be the key to healing his family’s rifts.

If your knowledge of Singapore comes from an episode of Anthony Bourdain’s show or “Crazy Rich Asians,” you at least know that the food there is the tasty amalgamation of several culinary staples, a mixture of many Southeast Asian cultures boiled and plated before our hungry characters. There are different mixtures of curry and spices, various grilled meats and clear broth soups, crunchy whole crabs and plump dumplings, wispy noodles and sticky mounds of rice. Khoo gives his audience a sampling of these dishes but rarely does he serve them a “Jiro Dreams of Sushi”-like close-up or have his camera drool over each spoonful as “Tampopo” does in its love letter to the hearty bowl of ramen. Instead, these shots are like appetizers, somewhat distant from what we’re used to in movies or documentaries about food, building towards the movie’s main course, Bak Kut Teh. Miki may not be the most lively presence in the movie, but as Masato’s guide to Singaporean cuisine, she helps the audience also understand the meaning and history of some of the menu options.

The film’s soft watercolor palette gives the impression of a gentle story. The colors change from a somewhat pastel view of the present day to a washed out, soft-focus perception of an idyllic past, like faded family photographs. When Masato revisits some of the sites in his parents’ photographs, we see past and present united briefly. It gives him a chance to reflect, and viewers a chance to see how emotional and meaningful this food trip is for him. It’s more than just the search for an old family recipe, it’s a chance for him to reclaim this part of his cultural identity.

Sometimes our past can come with so much baggage, it’s preferable to just focus on the good things like our favorite childhood meal. In reconnecting with his estranged relatives, Masato also finds anger and pain on both sides of his family tree. However, the movie is about reconciliation and doesn’t go too deep into exploring that generation-long grudge. “Ramen Shop” believes that the healing power of food can satisfy our hunger for comfort in difficult times, and that should be filling enough for now. 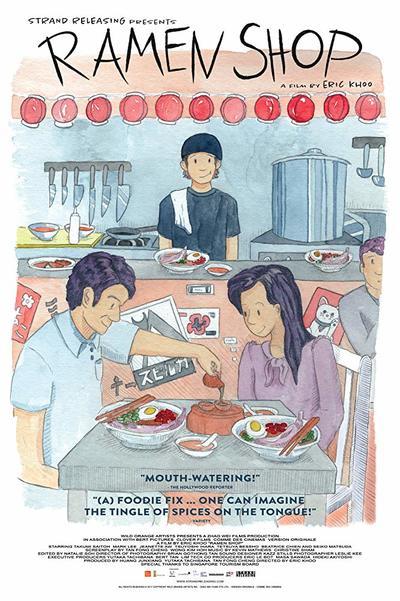