In a desperate attempt to jog my memory about anything regarding “Rambo,” the 2008 attempt to revive Sylvester Stallone’s other notable film franchise, I went back to the review I wrote when it came out. In the final paragraph, I wrote, “Maybe if it does well at the box office, it will inspire Stallone to write and direct a proper wrap-up for a character that has served him long and well—one that will allow him to confront the real world instead of the sub-comic book surroundings of this disappointing effort.” Well, eleven years have passed, and Stallone has given John Rambo one more go-around with “Rambo: Last Blood.” The title is perhaps the cleverest thing about it.

As the film opens, Rambo is living a tranquil life on his ranch in Arizona, where he now spends his time training horses, doting upon his adopted family, Maria (Adriana Barraza) and her college-age granddaughter Gabrielle (Yvette Monreal), sitting on the porch in his rocking chair, perhaps contemplating how his actions in “Rambo III” might have helped lead to the formation of the Taliban. Okay, maybe it isn’t entirely tranquil—he is taking tons of pills to combat PTSD, he has an elaborate underground tunnel system that he has dug out beneath his house (the perfect location for the occasional Nam flashback) and he confesses to Gabrielle at one point that, in regards to his inner rage, “I’m just trying to keep a lid on it.” Having tracked down her long-lost father to Mexico, Gabrielle wants to go down to see him and understand why he left years earlier. Rambo tries to warn her that it is pretty much the most horrible cesspool on Earth, but you know these spunky college-bound girls with bright futures seemingly ahead of them. Approximately nine minutes after crossing the border, she is kidnapped and drugged by a sex-trafficking ring headed by the fearsome Martinez brothers, Victor (Oscar Jaenada) and Hugo (Sergio Peris-Mencheta).

When Rambo gets the news that Gabrielle has gone off to Mexico, he goes off in pursuit, but his first encounter with the Martinez gang ends with him brutally beaten and left for dead in an alley with a brand-new scar carved into his face. He is rescued by Carmen (Paz Vega), an “independent journalist” who is there to tend to his wounds and offer necessary exposition. Upon healing, Rambo returns to the Martinez joint to rescue Gabrielle in what feels like an even more violent homage to the already grisly climax of the slightly better “Taxi Driver.” This, as it turns out, is all prelude to the film’s climax, where hordes of Mexican killers turn up at Rambo’s ranch armed to the teeth and out for blood, only to discover that he has given his tunnels a “Home Alone”-style makeover by rigging it with booby traps. All so that he can go after them with arrows, knives, sawed-off shotguns, spikes, mines and, perhaps most cruel of them all, the sound of The Doors doing “Five to One” over a loudspeaker in clear violation of the Geneva Conventions.

Taken simply on its own merits, “Rambo: Last Blood” is an undeniably awful movie. While the previous installment may have brought to mind many of the cheapo “Rambo” knockoffs produced in the ‘80s by Cannon Films and featuring the likes of Chuck Norris or Michael Dudikoff, this one feels more like a direct-to-video item that inexplicably made it to multiplexes. The screenplay by Stallone and Matthew Cirulnick is an unforgivably clunky work in which even the most rudimentary of plot points have been cast aside, the dialogue is embarrassingly heavy-handed (“I want them to know that death is coming”) and the kinetic thrills that made “Rambo: First Blood Part II” watchable have been replaced by over-the-top carnage (made even less effective by the over-reliance on CGI gore). Behind the camera, Adrian Grunberg (who previously did “Get the Gringo,” a south-of-the-border sleazefest that was made with a certain style and wit) is clearly directing this by the numbers, but, based on the overly dark visual style and clumsy staging, he never gets out of the single digits. Yes, some of the insanely gory bits during the final stretch are amusing in a sick way but even those moments are too little and way too late to help matters much.

Here is what I cannot figure out about “Rambo: Last Blood.” Stallone is a smart man, a singular screen presence and has shown strong acting chops when given material that allows him to take full advantage of his talents. Perhaps he doesn’t feel quite as close to the character of Rambo as he does Rocky Balboa because Rambo was not a creation of his. Nevertheless, the original “First Blood” (1982) remains an uncommonly strong, smart and thoughtful film and his performance there is still one of his best. The follow-ups may not have come close in quality but they were successful enough to make one think that if this film is truly the final film appearance of John Rambo. Stallone might want to put some effort into sending the character off with some degree of respect, as he did with his greatest creation in Rocky Balboa and the “Creed” films. Does he honestly think this is a fitting conclusion to a role that helped make him one of Hollywood’s biggest stars? For his sake, let us hope not.

Pretty much a rip-off through and through (it clocks in at just under 90 minutes, at least 10 of those dedicated to an end credits sequence featuring highlights from all the previous films, including the one that just concluded), “Rambo: Last Blood” is junk from start to finish. Without giving anything away, it should be noted that the ending does not in any way prevent the possibility of another film (“Rambo: Last Blood Part II,” perhaps?) if this one makes a killing at the box office. Well, if that does happen, maybe Stallone will take my advice and give the character a worthy send-off at last. Barring that, maybe he can just scrap the idea and do “Rhinestone II” instead, a notion that strikes me as being far more appealing at this point. 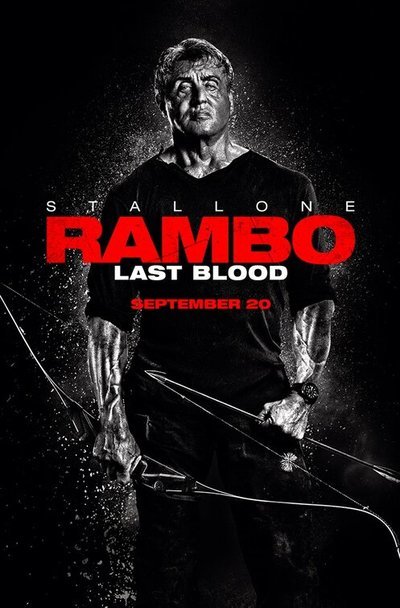 Writer (based on the character created by)